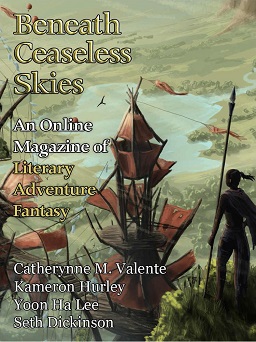 Black Gate would like to salute editor Scott H. Andrews and the entire team at Beneath Ceaseless Skies for achieving a remarkable milestone: publishing an amazing 200 issues over the last eight years. (To put that in perspective, that’s 185 more than Black Gate, every one of them on time! I get light headed just thinking about it.)

Simultaneous with their landmark 200th issue, the magazine wrapped up their subscription drive aimed at enabling the magazine to publish longer stories, and announced that they are now open to stories up to 11,000 words. Sweet!

But the big news is the big double issue. Issue #200 of Beneath Ceaseless Skies is dated May 26 and features fiction by Catherynne M. Valente, Kameron Hurley, Yoon Ha Lee, and Seth Dickinson, podcasts by Yoon Ha Lee and Seth Dickinson, and a Gaunt and Bone reprint by BG author Chris Willrich. Here’s the complete Table of Contents.

“The Limitless Perspective of Master Peek, or, the Luminescence of Debauchery” by Catherynne M. Valente
So it came to pass that over the weeks remaining until the parturition of Perdita, I fashioned for her, out of crystal and ebony and chips of fine jade, twin organs of sight not the equal of mortal orbs but by far their superior, in clarity, in beauty, even in soulfulness. If you ask me how I accomplished it, I shall show you the door, for I am still a tradesman, however exalted, and tradesmen tell no tales.

“The Judgment of Gods and Monsters” by Kameron Hurley
She shouldn’t have gone to the trial, or talked to that stupid reporter, even for a second. Her father would know, now, that it was her who had his file. It was her who had been called upon to bring him in. She wouldn’t have shown up at the trial otherwise, and he knew it. “Two bits to the one whose family it isn’t,” she said to Merriz, and rolled up to get a look at the shooters.

“Shadow’s Weave” by Yoon Ha Lee
Tamalat studied Brio. He wasn’t going to thank her when he woke up. She didn’t feel the least bit sorry. “He was a better man once,” she said. She remembered the war; remembered the snow churned to red slush, the arguments between Brio and his brother the commandant. “He left his shadow behind when he went into exile, thinking to start anew. It didn’t work the way he intended.”

“Laws of Night and Silk” by Seth Dickinson
This is how an abnarch is made. This is the torment to which Kavian gave up her first and only born. The wizards of the Paik Rede, dam-makers, high rulers of isu-Cter, seal a few of their infants into stone cells. They grow there, fed and watered by silent magic, for fifteen years. Alone. Untaught. Touched by no one. And on nights like these, their parents decant them for the war.

“Shadow’s Weave” by Yoon Ha Lee (Duration: 40:59 — 28.15MB)
And we won’t be lovers, Tamalat thought, unless I can restore your shadow. She knew better than to sleep with him in his current state.

Laws of Night and Silk” by Seth Dickinson (Duration: 55:16 — 37.95MB)
They pass through everything that will be lost if they fail.

“The Sword of Loving Kindness, Pt. I” by Chris Willrich (from BCS Issue #1, October 9, 2008)
Gaunt and Bone must resist a magic sword bending them toward propriety and decorum.

This month’s cover, “High Above the Savannah,” is by Martin Ende. We last covered Beneath Ceaseless Skies with issue #199.