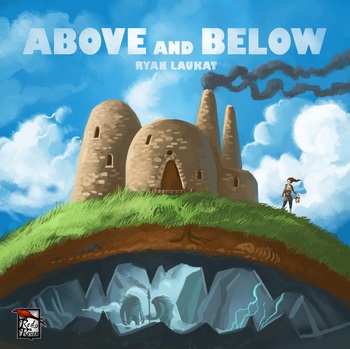 When Kickstarter first became popular, it seemed every month I was getting deluged with updates for a dozen campaigns for new board games. Many failed, of course, and more than a few never delivered. But lots of those promising projects did deliver, and the result has been some fascinating products over the last few years.

Ryan Laukat’s Above and Below is a great example. It was a Kickstarter project with a $15,000 goal, and ended funding on March 25th, 2015 with $142,148 pledged. The last few copies shipped out to the 2,553 backers in October of last year, and the game has been available to the rest of us ever since.

Above and Below is a mashup of town-building and storytelling where you and up to three friends compete to build the best village above and below ground. The game’s premise should be warmly familiar to most fantasy readers.

Your last village was ransacked by barbarians. You barely had time to pick up the baby and your favorite fishing pole before they started the burning and pillaging. You wandered over a cruel desert, braved frozen peaks, and even paddled a log across a rough sea, kicking at the sharks whenever they got too close, the baby strapped tightly to your back.

Then you found it! The perfect place to make your new home. But as soon as you had the first hut built, you discovered a vast network of caverns underground, brimming with shiny treasures, rare resources, and untold adventure. How could you limit your new village to the surface? You immediately start organizing expeditions and building houses underground as well as on the surface.

With any luck, you’ll build a village even stronger than your last — strong enough, even, to turn away the barbarians the next time they come knocking.

Players explore a massive cavern, building a new village above and below ground in what more than one reviewer has called a Choose Your Own Adventure-style board game.

Here’s the back cover. 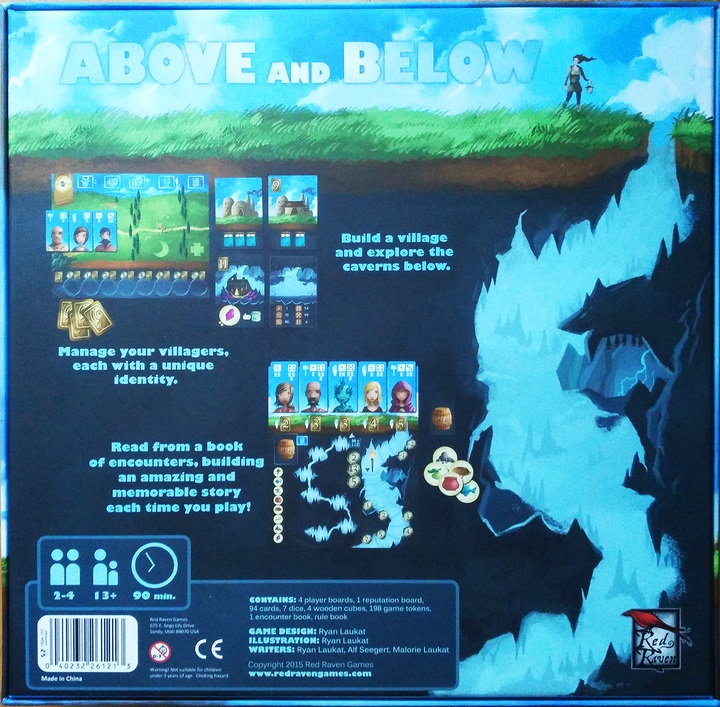 Players send villagers to perform tasks like exploring the cave, harvesting resources, and constructing houses. The villagers are depicted with colorful board pieces, and each has unique skills and abilities.

I bought a copy of Above and Below last month, and I’ve been impressed with the colorful design and originality of the board and the rest of the components. Each player has her own personal village board, and she can slide the villagers to various areas to indicate what jobs they’ve been given. Should you send Hanna on the expedition to the cave? Or have her teaching important skills to the young villagers instead? 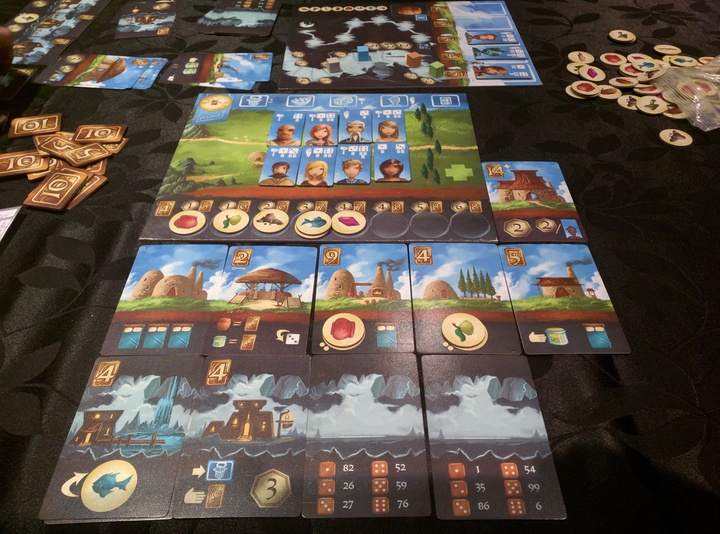 The game is a nice mix of resource collection, role playing, adventure, and strategy. It plays very well with just two players, though up to four are possible. While it looks like a fairly typical exploration game, it mixes in aspects of role-playing with the addition of a choose-your-own-adventure encounter booklet.

This keeps things interesting while you’re waiting for other players to finish their turn… and you frequently find yourself rooting for the other players (or, at least, for them to get an interesting outcome) during the encounter phase. In a lot of ways, this keeps the game light-hearted and fun.

Ryan Laukat is also the designer of Empires of the Void, City of Iron, and Eight-Minute Empire. He did the artwork for Above and Below, and it looks terrific.

Here’s a video runthrough from Rahdo Runs Through, so you can see the game in action:

Above and Below was published by Red Raven Games in September 2015. It is priced at $49.99, though I bought my copy online with a 25% discount.

See all of our recent fantasy games coverage here.

I really treasure games that play well for two players. Someday my kids will be old enough for us to host or go to board game parties again. Meanwhile, it’s just the spouse and me at the dining room after the small people are tucked in.

I really should make more of an effort to get Alice interested in board games. I don’t think she’s played any since she was a kid. It’s always been an activity I do with the kids.

Sarah — Hyperborea (which John wrote about last week) works quite well as a two-player game. Ditto Takenoko (which is about an impossibly cute panda eating bamboo). Or if you want something cooperative, maybe Forbidden Desert or Pandemic.

We’ve really liked Forbidden Desert and Forbidden Island. Lost Cities is a good one, too. Pandemic can get bleak, so I prefer it with a larger group, to leaven the doom with table talk. I wish there were a version of Settlers of Catan that really played well for two.

Another year, and both our boys will be reading. We’re finally at the point where we can all play Sorry and genuinely enjoy ourselves. I can’t wait to catch them up to Ticket to Ride and Catan.

Carcassonne is another great two-player game that might also work for younger players, especially if you worry more about the tile placement than the scoring.

Wasn’t there some version of Catan for younger players? I think I saw it on the last season of Tabletop.

(And as an aside: In addition to Tabletop, I’m loving all of the board game review and playthrough videos I find on YouTube — very helpful for learning a new game, and also helpful for deciding whether a given game might be worth the investment …)