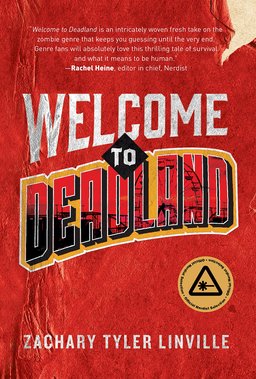 Zachary Tyler Linville won the first Nerdist Sci-Fi and Fantasy Novel Contest. His winning entry, the zombie apocalypse novel Welcome to Deadland, will be published by Nerdist/Inkshares early next month. The tale of a ragtag group of survivors who may well be humanity’s last hope, Welcome to Deadland is getting some early praise from folks like Jonathan Maberry (“Heartbreaking, compelling and highly recommended!”) and Scott Kenemore (“A powerful new voice in the horror genre… Welcome to Deadland opens doors that most of us would prefer to quietly tiptoe past.”)

A widespread disease has ravaged humanity — symptoms include: animalistic rage, violent outbursts, and a ravenous hunger for human flesh. The few people left are thrust together to fight for their lives, before the world becomes overrun by the infected. Asher, Wendy, and Rico try to reach an abandoned theme park, hoping for sanctuary. Although fear of the infected is ever-present, the group finds themselves facing some very human concerns, as well as new adversaries.

Asher is Wendy’s only friend, and she fears that she’ll lose him if he ever discovers the dark secret she’s been harboring. Reeling from heartbreak, Asher clings to Wendy as he struggles to heal. Rico is a seventeen-year-old rebel used to ditching school and partying all night — but can he outgrow his debauched behavior in order to protect a six-year-old boy who has suddenly fallen under his care? These three will have to overcome their own demons in order to save not only themselves, but the last vestiges of humanity.

Welcome to Deadland will be published by Nerdist/Inkshares on August 9, 2016. It is 414 pages, priced at $24.99 in hardcover and $7.99 for the digital edition. The cover was designed by Girl Friday Productions.