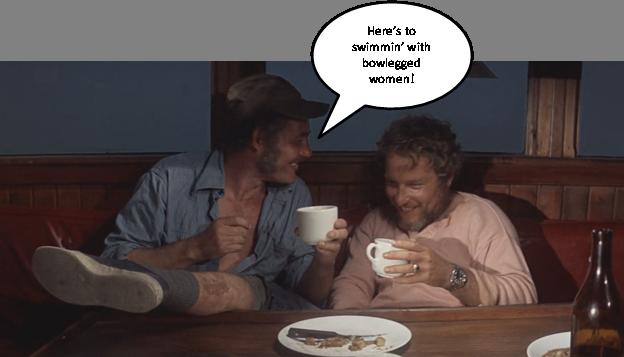 I have no problem admitting that Jaws is in my top five favorite movies of all time. Granted, some of that love is of the “point in time” sort; as in it was the first R-rated movie I was ever allowed to see, it was the first time I saw special effects approaching realistic (I had been on a steady diet of classic horror movies since I was 8) and it was the first time I had a concrete method of expressing my fear of deep water (“Sharks!”). Forgetting of course, that the closest I had ever come to salt water was the Shedd Aquarium.

Still, back then as it is today, I had a hard-core, undying love for Jaws… proven by the fact that under the influence of an adult beverage or two, I will drop quotes until you want to drown me yourself. Like,

“This was no boat accident!”

“Eleven hundred men went in the water, three hundred and sixteen men come out, the sharks took the rest.”

Okay maybe not that last one so much but I do say, “Let’s drink to our scars” which is part of that whole iconic scene where Quint tells Brody and Hooper about being on the U.S.S. Indianapolis when it was struck by a torpedo, which is the connective tissue between Jaws and the news I’m about to deliver.

As you are likely aware the tale Quint tells the boys that night is quite terrifyingly true. The Indianapolis was sunk on July 30, 1945 while on a top secret mission from the island of Tinian to Leyte, delivering the Hiroshima bomb. Because of the secrecy the Indianapolis was unescorted and running radio silent, so it was four days before the survivors were discovered accidentally and another full day before rescue efforts were underway.

During those five horrifying days, survivors were systematically picked off by sharks as they dangled, many of them with bleeding injuries, from their military-issued life vests, causing Quint to remark he’ll, “never put on a life jacket again.”

Which is why the upcoming release of USS Indianapolis: Men of Courage is sort of a Jaws prequel, only not really. 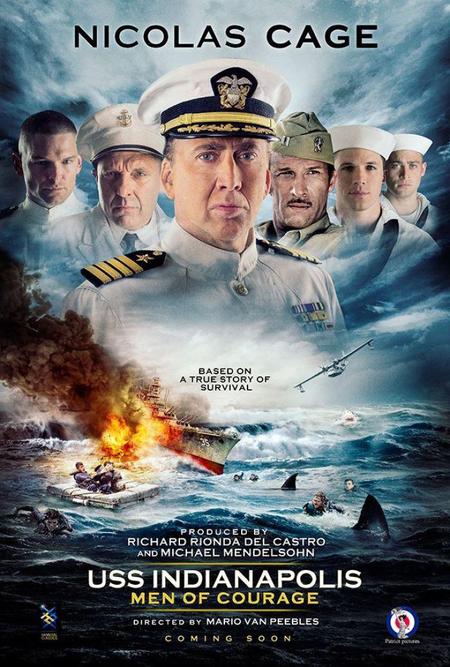 Directed by Mario Van Peebles (yes, THAT Mario Van Peebles – there’s only one), the film stars Nicolas Cage as Captain Charles Butler McVay, the real-life captain of the Indianapolis who was aboard the ship on that fateful day in 1945 and survived.

As noted by Variety, who got the exclusive on the movie trailer…

Because the ship was without an escort, the Indianapolis was not reported missing until four days later. Of 1,197 crewmen aboard, approximately 300 went down with the ship, while the rest faced exposure, dehydration, saltwater poisoning and shark attacks as they waited for assistance. Only 316 sailors survived, and McVay was court-martialed, then exonerated more than half a century later.

Quint’s Jaws character is definitely not McVay but one of the other 315 sailors who survived the Indianapolis. Captain McVay never got over his harrowing experience and after years of mental health problems, took his own life in 1968.

However, a peruse through the “full cast and crew” of the movie’s record on IMDB indicates there is a character named “Quinn”.  We’ll have to wait until later this year to find out if he is one of the survivors and if there is any similarities between this character and our beloved Robert Shaw’s.

USS Indianapolis: Men of Courage does not yet have a release date, but you can check out the trailer below.

If you haven’t seen me do this, I beg you to watch the intro video for my current Kickstarter https://www.kickstarter.com/projects/563681582/the-folio-9-the-lost-apprentice