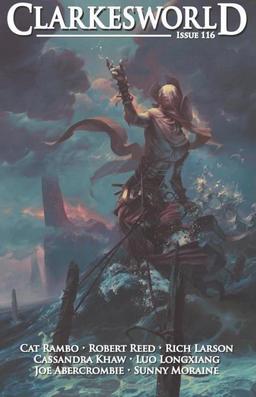 I love Peter Mohrbacher’s cover for the May issue of Clarkesworld, a gorgeously creepy piece titled “Ananiel, Angel of Storms” (click the image at right for a bigger version.) Mohrbacher has covered other Clarkesworlds — mostly recent issue 111 — but this is the first to really make me sit up and take notice.

“Jonas and the Fox” by Rich Larson is set in a post revolution farming community. Fox is a poet and fugitive from the new junta after the revolution starts to eat its own. He is hiding in the body of his nephew who is brain dead after an accidental fall. His Nephew Jonas, the other title character, must come to terms with the stranger inhabiting his brother’s body. The novelette cleverly links the revolution’s rewriting of history with the disconnect between Fox and his new body. The story is touching, and manages to keep you guessing as to how it will end. Larson is a young author and well worth keeping an eye on. If this piece is representative of his work, we could be looking at an excellent new talent.

“Left Behind” by Cat Rambo
“The Universal Museum of Sagacity” by Robert Reed
“Breathe” by Cassandra Khaw
“Jonas and the Fox” by Rich Larson
“Away from Home” by Luo Longxiang
“Tough Times All Over” by Joe Abercrombie (from Rogues, 2014)
“A Heap of Broken Images” by Sunny Moraine (from We See a Different Frontier: A Postcolonial Speculative Fiction Anthology, 2013)

Clarkesworld typically posts several Podcasts during the month. The first two are:

We last covered Clarkesworld with Issue 115.

That is quite the evocative cover… If covers sell mags, I would hope that one does it.