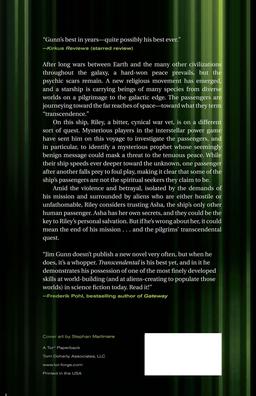 I’m always on the lookout for a good adventure SF series, and James Gunn’s pair of connected novels, Transcendental and Transgalactic, definitely look like they fit the bill. The books follow the adventures of Riley, a burned out war vet, and Asha, a woman on a pilgrimage to the Galactic Edge, as they investigate a mysterious alien prophet at the head of a new religious movement — and deal with the strange powers their investigation eventually gives them.

Transcendental was published by Tor in 2013, and is now available in trade paperback (see the back cover at right; click for bigger version.) Transgalactic was released in March in hardcover; here’s the description.

When Riley and Asha finally reached the planet Terminal and found the Transcendental Machine, a matter transmission device built by an ancient race, they chose to be “translated.” Now in possession of intellectual and physical powers that set them above human limitations, the machine has transported them to two, separate, unknown planets among a possibility of billions.

Riley and Asha know that together they can change the galaxy, so they attempt to do the impossible — find each other.

Excellent! I quite enjoyed “Transcendental” and will have to pick up “Transgalactic” soon.

Glad to hear it, Adrian!

I remember reading his Star Bridge (co-authored with Jack Williamson) and Sation in Space back in the Fifties, and his collection Future Imperfect in 1964. Haven’t read a word of his since, though.

R.K. Robinson- he has quite a bit worth checking out, “This Fortress World” and “The Listeners”.

I’m not sure what all is in “Future Imperfect”, but “The Burning” has three interconnected stories that are quite good, and “Some Dreams are Nightmares” has quite a few, as well.

Star Bridge is one of my all-time favorite space operas. The Joy Makers is also an impressive book. It’s good to know he’s still in the game.