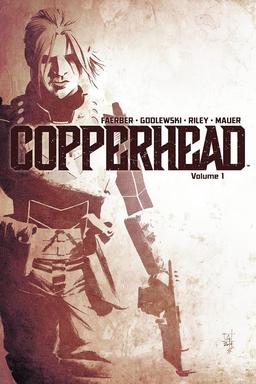 I don’t have as much time to keep up as I like, but even I noticed at 2015 was a great year for science fiction and fantasy comics. Titles like Saga, Monstress, Bitch Planet, Gotham by Midnight, ODY-C, Rat Queens, Pretty Deadly, Rumble, COWL, and many others did not escape my notice.

The editors of SF Signal have also been paying attention, and last week they produced a handy list of the Top 15 Science Fiction Comics of 2015. Frankly, it’s a dynamite list, and there’s something on it for everyone. If you’re curious about all the recent excited talk about comics, this is the place to start. Here’s #6 on the list, Image Comics’ Copperhead, by Jay Faerber and Scott Godlewski.

I’ll admit right up front, that as a long time Firefly fan boy, I have a strong bias in favor of space westerns, but I feel more than justified in including Copperhead in the top half of this list. Even Saga writer Brian K. Vaughan dubbed the comic the best debut of the year.

Copperhead is a fascinating series that blend the best conventions of Westerns and sci-fi without kitsch and without imitating its other successes of the genre. It’s hard to imagine a setup riper for sci-fi flavored action sequences, but where Faerber really shines is in his character development. Unlike Firefly, which follows outlaws, Copperhead focuses on breathing new life into the “arrival of a new Sheriff in town” trope with a protagonist who also happens to be a single mom. She’s a fierce female lead of the kind all too rare in comics with a big heart and an over-protective streak where her son in concerned. Rarely have I seen a science fiction title lavish such care on character development. Each and every one of Faerber’s character, no matter how small, feels fully fleshed out. Finally, let me add that there are “alien hillbillies.”

I’m spent the past 6 months reading nothing but comics. I didn’t do this intentionally its just what keeps grabbing my interest.

I love seeing comic posts on BlackGate and I haven’t read any of these except for the first issue of Saga.

I envy you all the comic-reading time, Glenn!

What can you recommend for us? Any great discoveries?

Usagi Yojimbo is an all ages comic by Stan Sakai. It has been running for almost 30 years and I think its the best comic out there.

Dark Horse’s Conan (although i haven’t read any of the more recent volumes).

and IDW’s TMNT and Star Trek.

I’ve also been reading a lot on Marvel Unlimited. I’ve never really been a Superhero kinda guy but with how much material is available on unlimited I’ve started to get into it.

if you enjoyed guardians of the galaxy then Skottie Young did a really funny Rocket Raccon series that’s only 18 issues long.

Also, I started reading Deadpool comics back in January to prepare for the new movie and I’ve really been bitten by that bug. I think i’ve read 100+ issues of Deadool since January.

Its more than just jokes and 4th wall breaking. There are some deep stories told where you get to see just how scarred Wade Wilson really is.

I also tried Volume 1 of Kurt Busiek’s Autumnlands and that was worth the price of admission as well.

I agree with your assessment of Usagi Yojimbo. I haven’t been regularly following IDW’s Star Trek, but I quite liked the issues I did come across.

I bought the first issue of Autumnlands, but never had a chance to read it. I’ll rectify that now!