Of all the books I’ve reviewed for Black Gate, definitely two of my favorites have been the Pathfinder Tales novels by James L. Sutter, Death’s Heretic and The Redemption Engine. I’m not alone, of course. There’s no shortage of Pathfinder Tales fans (or authors) hanging out around the Black Gate headquarters, and James Sutter is a friend of the website.

In fact, the enthusiasm is so great that I have a large backlog of Pathfinder Tales books that I haven’t gotten to read yet. These days, a decent chunk of my reading comes from listening to audiobooks while performing other tasks. I use Audible.com, but the Pathfinder Tales novels hadn’t offered audiobooks unfortunately. That changed with their announcement last October about a partnership with Audible Audiobooks to produce the audiobooks, not only for their newly-released titles but for their backlog of audiobooks as well.

To celebrate the Pathfinder Tales audiobooks, Audible.com is offering the Death’s Heretic audiobook for free through February 16. Once you purchase the book, it’ll remain in your digital library to access at any time, which you can do on apps available through iOS, Android, Windows, Mac, and online web formats. So, really, there’s little excuse for not signing up to get the book.

And if that’s not enough to keep you busy…

This isn’t Pathfinder’s first foray into the audible world. Over the last two years, they have collaborated to create dramatic audio presentations of their Rise of the Runelords and The Mummy’s Mask adventure paths through the Pathfinder Legends series. I’ve listened only to Rise of the Runelords, but it’s a fun format to interact with the storyline. It’s as if the classic radio era had great fantasy adventure storylines to work with.

The Pathfinder Legends series uses a lot of sound effects, as you would expect from an audio dramatization, but you can also incorporate sound effects into your game with the tool Syrinscape. Syrinscape, again, has a collaboration with Paizo so a lot of these sounds are directly intended to be used with the Pathfinder Adventure Path modules, and there are even subscription bundles where you can get sounds specifically tailored to the specific Adventure Path. 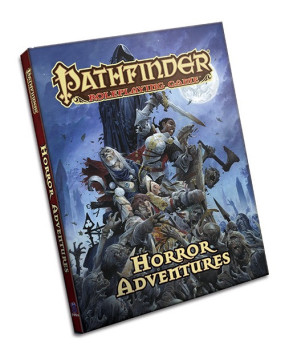 If you are more interested in creating your own stories, of course, you can do that too, and this sort of mood-setting audio may well prove useful with the upcoming hardcover Horror Adventures. This book, due out in July, promises some great new additional rules that up the gothic horror drama available within an adventure or campaign:

I recently mentioned that Wizards of the Coast was bringing back Ravenloft for Dungeons & Dragons 5th edition, so horror seems to be the order of the year in 2016, but Pathfinder RPG has never had a shortage of horror-themed material to draw from. Their Adventure Path Carrion Crown, set in the Transylvania-like nation of Ustalav, has some of their most gothic horror-themed material if you want to begin getting ready for a horrific adventure in the Pathfinder world of Golarion, even before Horror Adventures releases.

Though Pathfinder’s goblins are iconic, it’s clear that the publishing trend is offering options that move away from these classic fantasy gaming enemies. Together with their existing Occult Adventures (Amazon, Paizo), upcoming Ultimate Intrigue (Amazon, Paizo) and the related supplements, the limits of what you can do in a Pathfinder campaign are continually being extended.

These new and diverse setting options, whether they’re told in a gaming group, read silently in book form, or listened to via Audible, will no doubt inspire a great many enjoyable stories.