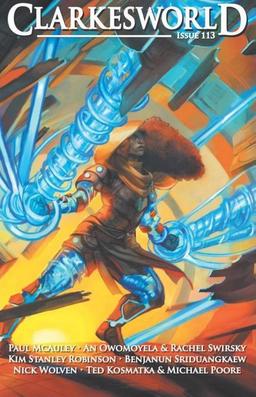 Neil Clarke makes a pretty big announcement in his editorial this issue.

It’s time to give up the day job. My family and I are trying to work out how to make that happen, but we need help to do so. If you are already subscribing to Clarkesworld or Forever, then thank you, that’s keeping the option on the table. If you haven’t been subscribing, now’s the time that would make the biggest difference to the future of this magazine.

I’ve mentioned before that a small percentage of our readers converting to subscribers would do the trick, but that’s easier said than done. Experience says that Clarkesworld will only be part of the puzzle. The new SFWA job helps. Forever helps. The anthologies help. Nothing stands on its own, but like a crowdfunding project, all the little bits add up to take you to your goal.

I think this is going to be a good year.

If you’re a fan of Neil and Sean’s work at Clarkesworld (and you definitely should be), then perhaps you might consider a subscription… this is the year when your support could really have an impact. And if you’ve never tried Clarkesworld or Forever, this is a great time to do so. Check out their support page — or why not buy their upcoming Clarkesworld: Year Eight anthology? It collects all the stories from last year, and the proceeds go towards supporting the magazine.

“The Fixer” by Paul McAuley
“That Which Stands Tends Toward Free Fall” by Benjanun Sriduangkaew
“In the Midst of Life” by Nick Wolven
“Between Dragons and Their Wrath” by An Owomoyela and Rachel Swirsky
“Blood Dauber” by Ted Kosmatka and Michael Poore (from Asimov’s Science Fiction, October-November 2009)
“Mercurial” by Kim Stanley Robinson (from Universe 15, 1985)

We last covered Clarkesworld with Issue 112.

This issue’s cover, “Power Surge,” is by Julie Dillon.