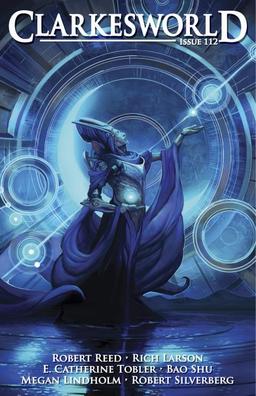 Neil Clarke uses his editorial this issue to announce the 2015 Reader’s Poll and Contest. Vote for your favorite Clarkesworld story and cover art, and you could win one of three copies of Clarkesworld: Year Eight (publishing this month). Voting is open now through February 23rd, and the results will be announced in the March issue. Cast your votes here!

“The Algorithms of Value” by Robert Reed
“The Abduction of Europa” by E. Catherine Tobler
“Extraction Request” by Rich Larson
“Everybody Loves Charles” by Bao Shu
“The True Vintage of Erzuine Thale” by Robert Silverberg (from Songs of the Dying Earth: Stories in Honor of Jack Vance, 2009.)
“Old Paint” by Megan Lindholm (from Asimov’s Science Fiction, July 2012)

Our Future is Artificial by Sofia Siren
Painterly Cyborgs and Distant Horizons: A Conversation with Julie Dillon by Chris Urie
Another Word: Let’s Write a Story Together, MacBook by Ken Liu
Editor’s Desk: The 2015 Reader’s Poll and Contest by Neil Clarke

We last covered Clarkesworld with Issue 111.

This issue’s cover, “Hierophant,” is by Julie Dillon.