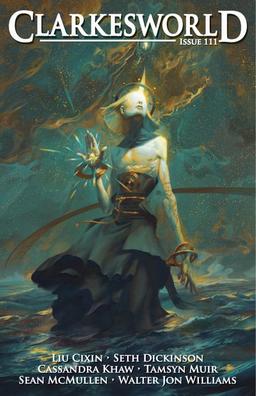 Neil Clarke’s editorial this issue includes some discussion of his long-term goals, a glimpse at his introduction to the upcoming Best Science Fiction of the Year, and the news that he’s also accepted a position as an interim editor of the SFWA Bulletin.

How do we shift the discussion of short fiction magazines from the goals of just merely surviving to growing into a thriving market? Yes, as the magazine editor, I have a vested interest in that path to financial success, but a good chunk of the buzz in my head was been triggered by the introduction I plan to write for The Best Science Fiction of the Year. I’ve been asked to include a state-of-the-market report in my introduction and plan to take the from-ten-thousand-feet view rather than perform a market-by-market analysis. Suffice it to say, no one has the answers, but there’s no shortage of ideas. I’m still trying to digest it all…

Oh, did I mention that I’ve also accepted the post as interim editor of the SFWA Bulletin and signed contracts for two more anthologies? Yeah, I’m a glutton for punishment, but pushing my limits seems necessary if I want to reach the point where I can quit the day job. (Yes, a day job on top of all that.)

“Yuanyuan’s Bubbles” by Liu Cixin, translated by Carmen Yiling Yan
“Union” by Tamsyn Muir
“Morrigan in Shadow” by Seth Dickinson
“When We Die on Mars” by Cassandra Khaw
“Technarion” by Sean McMullen (from Interzone #248, September-October 2013)
“Daddy’s World” by Walter Jon Williams (from Not of Woman Born, 1999)

A Dance with Futuristic Dragons: The Science-Fantasy Glamour of Marc Bolan and T. Rex by Jason Heller
The Humble Swashbuckling Grandmaster: A Conversation with Gene Wolfe by Kate Baker
Another Word: On Reading, Writing, and the Classics by Cat Rambo
Editor’s Desk: Hibernation Mode Activated by Neil Clarke

We last covered Clarkesworld with Issue 110.

This issue’s cover, “Kokabiel, Angel of the Stars,” is by Peter Mohrbacher.