It’s been a lot of fun getting deep into epic high fantasy over the past few months, and I hope you’ve been enjoying it as well, but it’s good to remember what got me started writing at Black Gate in the first place: swords & sorcery. So without further ado, here’s the November short story roundup.

Curtis Ellett’s Swords and Sorcery Magazine Issue 46 hit the virtual stands with its usual pair of stories, one by Brynn McNab and another by Black Gate‘s own Nicholas Ozment. As John O’Neill wrote last week, Ellet is planning on putting together an anthology of the best of his magazine’s first four years. Coupled with Heroic Fantasy Quarterly‘s “best of” anthology, it’s a good time for short fiction readers.

McNab’s story, “The Gargoyle and the Nun,” is a somewhat formless story of Merek and Arabella, a soldier transformed by a witch into a gargoyle and the woman he loves. The story, in which true love conquers all, feels very much like a fairytale and has some good moments. It suffers in the end, though, from being only three short scenes featuring characters without much character.

“Last Stand at Wellworm’s Pass” is a perfect dose of old school storytelling from Ozment. “Tamalin, one of the most feared and powerful mages in all of Rilsthorn” is on the run from a pack of assassins on the dark streets of Ment City. Cornered, he is rescued by a cloaked man named Kor. His deliverer offers to help the wizard escape through the maze of tunnels that run beneath the city and on to ultimate freedom by way of a place called Wellworm’s Pass. It’s a quick-paced story that, while it doesn’t offer anything startlingly new, is delivered with all the brio and skill needed to create a successful S&S tale. Any S&S story that can stuff in werewolves, demons, and djinns is alright by me.

Next, let me turn our attention to Fantasy Scroll Magazine. Admittedly, it’s been a long time since I last visited its pages but that’s because, despite some terrific heroic fantasy-themed covers, most of the publication’s stories have been science fiction or contemporary fantasy. Still, scattered across the last three issues have been some notable tales worth a heroic fantasy fan’s attention. Oh, and they announced that they’re working on an anthology of their first year’s best stories as well. It really is good times for anthologies. 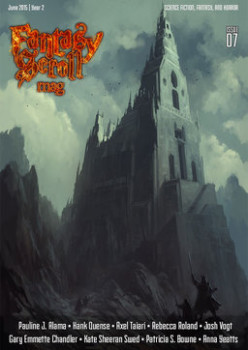 Issue #7’s “No Tale for Troubadors” by Pauline J. Alama finds Ursula, the erstwhile Maiden of Revie, once swordswoman and crusader, now noblewoman and mother of four children, called back to arms. It’s a time of war, when all the able-bodied men, including Ursula’s husband, are away fighting. A young parson, enamored of the old stories of the Maiden of Revie and her exploits, arrives at her keep to beg her to help his village. Trolls have come out of the mountains and are digging up graves and stealing the dead. Despite being no longer able to fit into her armor, she agrees.

Before facing her foes she has to convince her sorceror companion from the old days to leave the convent to which she’s retired. Once known as Isabeau, she has taken a new name as well as the habit.

A few sneezes later, the young nun returned. “The Abbess will see you. Follow me.”

She did not say Isabeau would see us, I noticed. She will take me to the Abbess, who will tell me Isabeau left years ago. But when the young nun bowed us into a cell, one of the two veiled women within raised her head, revealing a face as familiar as the palm of my hand: arched black brows, piercing blue eyes, straight nose, high cheekbones. I cried in relief, “Oh, Isabeau!”

She did not smile. “I left that name behind with the arts I once practiced. I am Sister Agony in the Garden, and my life is here. If you thought to win me away, Ursula, you’re years late.” 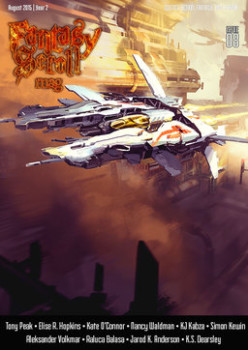 Despite some too-contemporary vocabulary and a history that mixes up real and fictional to no clear purpose, it’s an enjoyable story. The rueful conversations between the two old Crusaders, tinged with regret over paths not followed, are well done. And the ending was a true surprise, something I encounter rarely.

In Tony Peak’s “The Light Comes,” from Issue #8, Dynaea is a Sentinel, one of the small group which stands in the way of her people being wiped out by a magical scourge called the Slumber. It infects them while they sleep, filling them with dark magic and turning them into dangerous monsters called Gruls. At night, the Sentinels patrol the sleeping ranks of their fellows and slit the throats of any showing signs of the disease.

Taking a deep breath, Dynaea turned. An old woman lay on her back, so quiet and peaceful. Her gray locks were tied in the traditional Salfaran braids, just like Dynaea’s. Wrinkles and laugh lines testified to a long, happy life.

Violet frost crystals on the woman’s lips and eyelashes testified to the curse of the Slumber.

Dynaea glanced around. Good, no one stirred. She edged closer to the woman’s bed, Selak dagger held out before her. Its straight, fluted blade caught the moonlight for a moment, like a killer star.

Forcing her hands not to tremble, Dynaea observed the first Sentinel rule: try to wake the victim. She laid a hand on the woman’s shoulder and shook. Though her chest still rose in regular breaths, the woman’s body was cold to the touch. Frost crystals slid off her clothing and littered the sheets. Dynaea drew her hand back.

The second rule was to open an eyelid. If a normal, dilated eye stared back at her, then the woman might still be saved, with the aid of a small incantation.

Dynaea opened the old woman’s right eye. The frost crystals crunched as she separated eyelid from skin. Underneath, a solid black eyeball gazed into nothingness.

By the Myths this woman hadn’t fully frozen yet. With another’s help, she might be able to dispel the curse. Dynaea stared at the exit door.

It’s a harrowing duty from which there is no respite. But what if there is, wonders Dynaea. A dark, somber story, Peak manages to find a justifiable ray of light with which to end it. 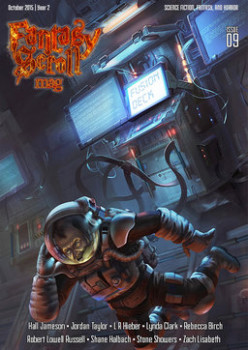 At only 604 words, “The Magister’s Clock” by Simon Kewin is a nicely nasty bit about stealing a clock so powerful wars have been fought over it. At such a short length there’s nothing else to tell you that wouldn’t give too much away.

Rebecca Birch’s dark fairy tale, “Beneath the Raven’s Wing,” from the most current issue, #9, is marvelous. Despite her father’s forbidding her to leave the safety of the family castle, Moira allows herself to be lured out late one night.

The haunting masculine voice that had drawn Moira into the night tickled at the edge of her hearing, rich and sweet as honey fresh from the hive, seeming to come from everywhere and nowhere, but always just ahead in the heavy fog that swirled over the lands around Castle Clary.

Away from the safety of the castle, Moira is at the mercy of forces she has never suspected even existed. She is an object of hatred for a powerful being that lives in the twilight world of the fae. Trapped there with wolves literally snapping at her heels, Moira uncovers a deep secret and takes a stand that that could easily leave her dead. Birch is an author I’m looking forward to reading more by in the future.

That’s all I’ve got for this month. I’m always curious to hear what people think of the stories I’ve reviewed, so if you get a chance drop me a line here. So go out there and get reading, then let the authors and editors know what you think.