Of all the books I’ve reviewed for Black Gate, definitely two of my favorites have been the Pathfinder Tales novels by James L. Sutter, Death’s Heretic and The Redemption Engine. I’m not alone, of course. There’s no shortage of Pathfinder Tales fans (or authors) hanging out around the Black Gate headquarters, and James Sutter is a friend of the website.

In fact, the enthusiasm is so great that I have a large backlog of Pathfinder Tales books that I haven’t gotten to read yet. These days, a decent chunk of my reading comes from listening to audiobooks while performing other tasks. I use Audible.com, but the Pathfinder Tales novels hadn’t offered audiobooks unfortunately. That changed with their announcement last October about a partnership with Audible Audiobooks to produce the audiobooks, not only for their newly-released titles but for their backlog of audiobooks as well.

To celebrate the Pathfinder Tales audiobooks, Audible.com is offering the Death’s Heretic audiobook for free through February 16. Once you purchase the book, it’ll remain in your digital library to access at any time, which you can do on apps available through iOS, Android, Windows, Mac, and online web formats. So, really, there’s little excuse for not signing up to get the book.

And if that’s not enough to keep you busy…

END_OF_DOCUMENT_TOKEN_TO_BE_REPLACED 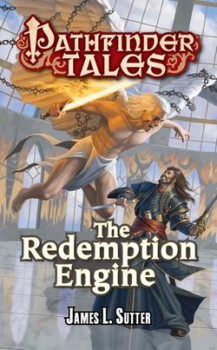 END_OF_DOCUMENT_TOKEN_TO_BE_REPLACED

If there’s one potential flaw in reading stories set in roleplaying game settings, it’s that the emphasis is more on the mechanics of the system and magical setting than on the development of the characters. The best stories, of course, are able to avoid this and create complex, dynamic characters that resonate among some of the most memorable in all of fantasy. Raistlin Majere, Elminster, and Drizzt Do’Urden all come to mind as iconic characters born in roleplaying tie-in novels.

Into this esteemed category steps Salim Ghadafar, the protagonist of James L. Sutter’s Death’s Heretic (Amazon, B&N), an upcoming addition to the Pathfinder Tales fantasy novel series from Paizo Publishing. Salim serves the goddess Pharasma, the Lady of Graves, goddess of birth, death, and prophecy, but he does so only grudgingly. This unusual tension, together with a compelling plotline, draws the reader deeply into the world of the story.

Salim is called upon by Pharasma to investigate a man who died shortly after obtaining one of the greatest treasures available to mortals: the sun orchid elixir, which grants near immortality. The details of his death are of secondary concern, though, compared to the events that followed. Pharasma is far more concerned with why her priests are unable to resurrect him. His soul has gone missing … seemingly stolen from the goddess’s very realm of the dead, the Boneyard itself. Salim’s investigation takes him – and the victim’s orphaned daughter, who is bankrolling the investigation – from local rivals for the elixir, including a crimelord and a gorgeous half-elven brothel madame, to the outer planes and Pharasma’s Boneyard. The investigation brings him face to face with creatures who predate the creation of the world itself, with the power to thwart the natural laws of life and death.