Pliny and Strabo wrote that on an island in the estuary lived the Libyan king Antaeus. Behind his palace stood the garden of Hesperides from which Hercules had to retrieve the golden apples. Some writers believe the “golden apples” were in fact tangerines, a common crop hereabouts.

In the 2nd and 1st centuries BC, Lixus was ruled by local Mauritanian kings, who built a huge defensive wall and maintained they city’s international trade connections. They minted their own currency, imported wine from Rome, and erected monuments with inscriptions in both Punic and Libyan. 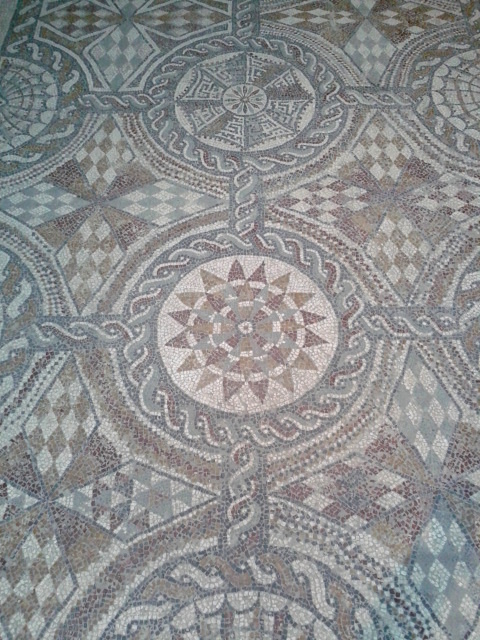 Lixus became a Roman city in 40 AD after Caligula ordered the assassination of Ptolemy, the last king of Mauritania. During that period the city saw steady expansion. On the upper town on the top of the hill, the Romans built fine temples and palaces, many of which had elaborate mosaics now housed in the archaeological museum in Tetouan. It’s sad to see mosaics removed from their original context, but sometimes it’s necessary. One fine and unusual mosaic in the public baths next to the theater showed Poseidon with the body of a lobster. In 1998, the guardian’s son tried to dig it up to sell and ended up wrecking it.

The lower town was dedicated to factories for salt and garum, the fish paste the Romans were so fond of. Many of the vats used in this process are well preserved.

In the Late Roman period, the city’s fortunes sank along with the rest of the empire. Diocletian withdrew the border to the north, leaving Lixus stranded, but the city soldiered on, remaining an urban center until the 15th century, well into the Islamic period. Eventually nature did what generations of enemies couldn’t. The estuary gradually silted up until Lixus was landlocked. The population moved to the new mouth of the estuary and founded modern Larache.

Today the site is guarded but generally overlooked. It lacks the monumental grandeur of many Roman cities but is still worth a visit. Excavations have been conducted on and off by Spanish and Moroccan archaeologists for almost a century, but still only a quarter of the site had been excavated. I haven’t found much about the site published in English, but if you can read Spanish there’s a good PDF article here.

What a wonderful site, with excellent remains and a fascinating history. If only the guardians were a bit more *guarded*. Qui custodiet ipsos custodes?