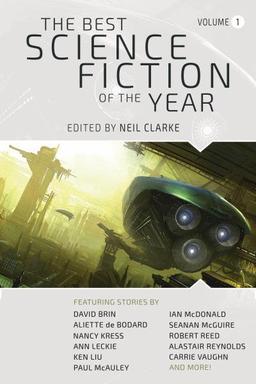 I’m always pleased to see a new Best of the Year volume join the ranks — especially when it comes from Neil Clarke, one of the most gifted editors in the field. As regular readers of Black Gate are aware, Neil is the Editor-in-Chief and publisher of Clarkesworld and Forever magazines, and he’s been awarded three Hugo Awards, a World Fantasy Award, and a British Fantasy Award. He has a keen and very discerning eye for the best in modern short fiction.

To keep up-to-date with the most buzzworthy and cutting-edge science fiction requires sifting through countless magazines, e-zines, websites, blogs, original anthologies, single-author collections, and more — a task accomplishable by only the most determined and voracious readers. For everyone else, Night Shade Books is proud to introduce the inaugural volume of The Best Science Fiction of the Year, a new yearly anthology compiled by Hugo and World Fantasy award–winning editor Neil Clarke, collecting the finest that the genre has to offer, from the biggest names in the field to the most exciting new writers.

The best science fiction scrutinizes our culture and politics, examines the limits of the human condition, and zooms across galaxies at faster-than-light speeds, moving from the very near future to the far-flung worlds of tomorrow in the space of a single sentence. Clarke, publisher and editor in chief of the acclaimed and award-winning magazine Clarkesworld, has selected the short science fiction (and only science fiction) best representing the previous year’s writing, showcasing the talent, variety, and awesome “sensawunda” that the genre has to offer.

I didn’t have the opportunity to read as much short fiction as Neil last year, but a glance at his TOC reveals that a handful of anthologies and magazines dominated the field. Going just by his choices, Meeting Infinity was the strongest anthology of the year (with 4 selections), and Asimov’s, Clarkesworld and Lightspeed the top magazines (with 12 selections between them).

The Best Science Fiction of the Year: Volume One was edited by Neil Clarke and will be published by Night Shade Books on June 7, 2016. It is 512 pages, priced at $17.99 in trade paperback and $10.99 for the digital edition.