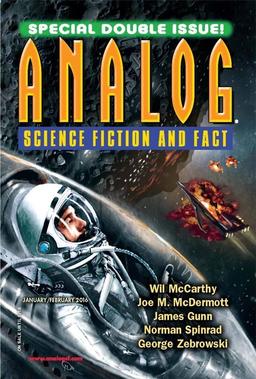 We don’t regularly cover Analog here at at Black Gate, on account of the fact that it’s a hard science fiction magazine, and we generally focus on fantasy. But December brought us the big January/February double issue, with a robot western from Wil McCarthy (the novella “Wyatt Earp 2.0”) and stories from James Gunn, George Zebrowski, and Caroline M. Yoachim and Tina Connolly, plus a guest editorial by Howard Hendrix, and I just couldn’t resist. You’re welcome.

The new year is traditionally a time to look ahead and let go of the past, but sometimes, the past can provide a solution to a problem in the here and now.

In this issue’s lead story, the “here and now” is Mars in the future, and the key piece of the past is… well, the title of the story should give it away. Join us for “Wyatt Earp 2.0,” from Wil McCarthy.

Edward M. Lerner returns to his science-behind-the-stories series of articles with a subject so big, a single installment couldn’t contain it: human augmentation. Part I of “Human 2.0: Being All We Can Be” hits this month.

Of course we also have a slew of pieces varied and wonderful, as befits our first double-issue of the year, including “We Will Wake Among The Gods, Among the Stars,” by Caroline M. Yoachim and Tina Connolly, “Farmer” by J.M. McDermott, “Rocket Surgery” by Effie Sieberg, “Saving the World: A Semi-Factual Tale” by James Gunn, “Time Out” by Norman Spinrad, “The Persistence of Memory” by Rachel L. Bowden, “Theories of Mind” by Conor Powers-Smith, “Nature’s Eldest Law,” by Alvaro Zinos-Amaro, “The Heat of Passion” by Grey Rollins, “Woundings” by George Zebrowski, “The Shores of Being” by Dave Creek, and “An Industrial Growth” by David L. Clements, not to mention columns galore.

“We Will Wake Among The Gods, Among the Stars,” Caroline M.Yoachim & Tina Connolly
“The Heat of Passion,” Grey Rollins
“The Shores of Being.” Dave Creek
“An Industrial Growth,” David L. Clements

Creating Conflict: How to Write Adversaries Good (Bad) Enough to Bring Out Your Hero’s Best,” Richard A. Lovett

Analog Science Fiction and Fact is edited by Trevor Qachari and published by Dell Magazines. The cover price is $7.99 for 192 pages; a one-year subscription is $34.97 (US) or $49.97 (International). It is also available in a variety of digital formats. Check out the complete TOC, story excerpts, and additional free content at the website.

The January/February issue is on sale until January 19th. The cover this issue is by Maurizio Manzieri.