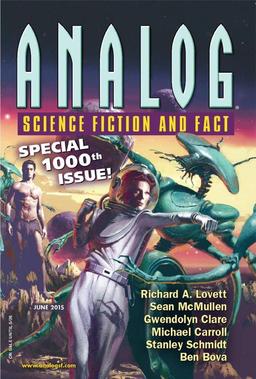 I don’t usually cover Analog Science Fiction and Fact here at Black Gate — in fact, I think the most recent issues we’ve covered were April 1980 (containing George R.R. Martin’s “Nightflyers”) and August 1968. When it comes to science fiction, Analog is about as hard as it gets, and the magazine has always been proud of the fact that it doesn’t publish anything so fluffy as fantasy.

But I’m happy to make an exception in this case. The June 2015 issue of Analog happens to be the 1000th issue, a landmark well worth celebrating.

Analog first appeared in January 1930, as Astounding Stories of Super-Science, under editor Harry Bates, and it has been published continuously ever since. Over the course of 85 years, Astounding/Analog has become the most important magazine in the history of science fiction and fantasy, and it continues that proud tradition today under editor Trevor Qachari.

In celebration, this issue has special columns from emeritus editors Stanley Schmidt and Ben Bova, and genre historian extraordinaire Mike Ashley, as well as fiction from Sean McMullen, C. C. Finlay, Ted Reynolds and William F. Wu, Richard A. Lovett and many others, all under a great cover by Vincent DiFate.

“The Wormhole War” by Richard A. Lovett
“Very Long Conversations” by Gwendolyn Clare
“The Kroc War” by Ted Reynolds and William F. Wu
“Strategies for Optimizing Your Mobile Advertising” by Brenta Blevins
“The Odds” by Ron Collins
“The Empathy Vaccine” by C. C. Finlay
“Three Bodies at Mitanni” by Seth Dickinson
“Ships in the Night” by Jay Werkheiser
“The Audience” by Sean McMullen 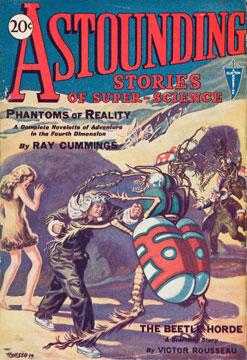 Analog Science Fiction and Fact is edited by Trevor Qachari and published by Dell Magazines. The cover price is $7.99 for 192 pages; a one-year subscription is $34.97 (US) or $49.97 (International). It is also available in a variety of digital formats. The cover this issue is by Vincent DiFate. Check out the complete TOC, story excerpts, and additional free content at the website.

Our most recent coverage of Astounding/Analog magazine includes:

Our mid-May Fantasy Magazine Rack is here. See all of our recent fantasy magazine coverage here.