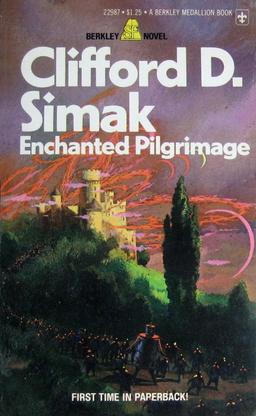 Clifford Simak is often described as a pastoralist, his sci-fi stories set in rural Wisconsin or some reasonable facsimile thereof. Kindly robots as well as smart and faithful dogs feature in many of his books. Scholars are more likely than soldiers to figure as his heroes. There’s more kindness and sense of wonder than violence in most of his stories.

If you haven’t read him (which wouldn’t be surprising since most of his twenty-six novels and multitude of story collections are out of print in the US), snag a battered old copy of City or Way Station to start. City holds a place in my heart as one of my favorite books. Simak brought a gentle humanity to his writing. Love of an unhurried life and respect for common decency run through many of his stories.

Inspired by John O’Neill’s post about The Goblin Reservation, I dug out the first of Simak’s three fantasy novels, Enchanted Pilgrimage (1975). In it, a disparate party of travelers leave the safety of humanity’s lands to explore the dangerous, magical Wasteland. He would revisit this theme twice more before his death in 1986, in the structurally similar The Fellowship of the Talisman (1978) and Where the Evil Dwells (1982).

I remember liking the book thirty years ago and thirty years later, I still like it. It’s fully fantasy and science fiction, both. While there are goblins, gnomes, witches, and trolls, there are also UFOs, a robot, and a traveler from an alternate Earth.

Mark Cornwall is a scholar at the university in Wyalusing. When he discovers a hidden document alluding to secrets in the Wastelands only the intervention of Oliver, a goblin living in the library’s rafters, saves him from the clutches of the Inquisitor, Beckett. Together the duo march off into the magical wilderness. Fairly soon they are joined by Gil, a Marshman, Hal, a Forest Man with his raccoon companion, Old Coon, and Snively, a gnome blacksmith. Later they meet Mary, a servant who has childhood memories of living in the Wasteland, and she becomes a member of the party.

While some fey folk live in relative peace with humans, the majority live in the Wastelands. Some, like elfs, goblins, and trolls, are indifferent to humanity, others, like giants and the ferocious Hellhounds are fiercely inimical to all humans. 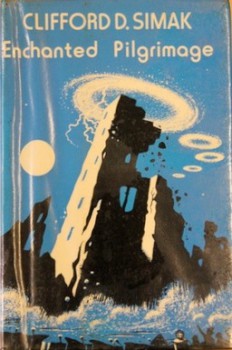 Each pilgrim has his or her own reason for journeying and risking the hazards of the Wastelands. None is setting out to overthrow a dark lord or prove his right to the throne, instead it’s all pretty low key. Mark and Oliver hope to find and study the Old Ones, an ancient people said to dwell in there. Gil made a promise to a dying hermit to return a stone fist axe to the same Old Ones, and his friends, Hal and the raccoon, agree to help guide and protect him. Snively enlists to make sure Mark and the others don’t do anything to rile up the more volatile inhabitants of the Wastelands. Finally, Mary hopes to find out her past and who here parents were.

Enchanted Pilgrimage is an odd book. While the various quests and obligations of the different travelers are fulfilled, the end doesn’t feel like much of a resolution. Certain important questions aren’t answered, a big reveal comes swooping in out of absolutely nowhere, and the future predicted for the heroes is vague. And yet again I’ll say… I liked it.

While the party has a destination, the book consists mostly of only loosely linked episodes. Beckett, whom the reader suspects will be the big villain of the story, isn’t. In fact, even the Hellhounds, who appear oozing malice and promising bloodshed, aren’t really villains. Greater obstacles to achieving their assorted goals are pigheadedness, rashness, and ignorance.

In keeping with the other things he’s done in the novel, Simak doesn’t stint at showing, quite graphically, what happens when killing is used to solve problems. The most vivid moment, telling of Simak’s attitude towards the violence attending most fantasy, concerns the aftermath of an accidental fight in an inn’s barn that leaves several men dead, including the innkeeper:

A couple of miles away he found the innkeeper, the man he had glimpsed through the window of the inn the night before, smashing crockery and breaking up furniture. He swung at the end of a short rope tied to the limb of a massive oak tree that leaned out from the hillside to overhang the trail. His hands were tied behind him and his head was twisted strangely by the pressure of the rope. He twirled back and forth at the faint stirring of the breeze. And he dangled, he dangled horribly. A chickadee was perched on one shoulder, a tiny, innocent mite of a gray-white bird, picking at the blood and froth that had run from the corner of the mouth.

Later on, Hal knew, there would be other birds.

He stood in the mud of the trail and looked up at the dangling, twirling man and felt, gathering in his mind, a vague sense of horror and of melancholy. 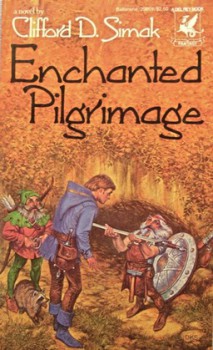 While the characters aren’t the most developed, Simak does lend each a few long moments in the sun, giving you reasons to care about what happens to him or her. The background he sketches out for each traveler could easily set the stage for individual tales for them. We see how each character is reacting to the quest and his or her comrades of the road, but while he does a good job exploring the travelers’ camaraderie, the last-minute romance that blooms between Mark and Mary is pretty slipshod — easily the weakest element of the book.

Enchanted Pilgrimage is full of terrific minor characters and images. There’s the Gossiper, a lanky, disheveled wanderer followed by a raven and a little, limping dog. He always arrives in time to bear bad news or when a meal’s to be had. A dying alien gives birth to a robot just prior to the arrival of vengeful UFOs. Beckett falls prey to the sadistic Hellhounds in one of the most horrible scenes I have read in recent months.

I’ll end by repeating that this is an odd book. It is a bit of a jumble, but I still found it compelling. I wanted to see what was on the far side of the next hill just as much as the pilgrims did, and I never felt cheated when I finally saw what lurked there. If you come across a copy, take a chance and get it. Then let me know what you thought.

Should I add this to my mental list of Chaucer-inspired SF/F? Sounds like a similar grab-bag effect, but with less story-within-a-story.

I am fairly certain I read this book when I was in high school, but I don’t remember much about it. That means I need to read it again. 🙂

@Sarah A – Probably not. It’s only a pilgrimage in the loosest of senses.

Please Please Please post reviews, of his other 2 fantasy novels Where The Evil Dwells” and The Fellowship Of The Talisman” these works deserve broader recognition