The Goblin Reservation was Clifford D. Simak’s fourteenth novel. An entertaining blend of science fiction and fantasy, it features a ghost, leprechauns, trolls, banshees, a dragon, a cybernetic sabertooth tiger, a Neanderthal, Shakespeare, aliens who get around on wheels, time travel, and stranger things. It was nominated for a Hugo Award in 1969.

The novel opens in the distant future as Professor Peter Maxwell is traveling home to Earth, which has been transformed into a single great University. When he gets there, he learns that he already arrived a week earlier — and was promptly murdered, either by aliens or their rivals, the goblins and trolls who’ve been brought from Earth’s distant past for study, and now live on a protected reservation. Suffice to say, The Goblin Reservation is wholly unlike any other fantasy novel, and could only have been written by Clifford D. Simak.

It was originally serialized in two parts in Galaxy Science Fiction magazine (April and June, 1968). It was first published in paperback by Berkley Medallion in March 1969, with a cover by the great Richard Powers (above left). It was reprinted by Berkley in May 1977 with a much greener cover (above middle, artist unknown), and again in May 1982 by DAW, with a cover by Kelly Freas (above right).

Frederik Pohl, the editor of Galaxy, bought the novel for his magazine. I don’t know if the book was abridged for its magazine appearance, but probably. It made the cover for the April 1968 issue (above left, art by Gray Morrow).

The Goblin Reservation first appeared in the UK in 1969 from Rapp & Whiting, but the cover they gave it is so boring I can’t bear to look at it (it’s here — but brace yourself.) Far superior is the January 1971 paperback from Corgi, with a cover by the brilliant Bruce Pennington (above middle). The last UK edition was from Methuen in March 1987, with the best cover of the lot (above right).

The last English language paperback edition of The Goblin Reservation appeared in February 1993 from Carroll & Graf, part of their Masters of Science Fiction line. The cover was by Les Edwards. It was significantly cropped for the paperback appearance; the original canvas (above) is a stunning piece of art.

Here’s the back cover text for the the Carroll & Graf edition:

Professor Peter Maxwell is in desperate straits. En route to an interplanetary research mission, he was snatched by a strange, shadowy race to a previously uncharted planet. Ancient beyond comprehension, this planet is a storehouse of information that would be invaluable to the people of Earth — even an Earth so far advanced that perfected time travel allows goblins, dinosaurs, ghosts, even Shakespeare to coexist. His attempts to interest the rulers of Earth are thwarted, however, by a startling discovery — Maxwell was ingeniously duplicated. The “other” him came back before he did, and soon after was “accidentally” killed. Now no one will believe the original Maxwell really exists…

The Goblin Reservation was published by Carroll & Graf in February 1993. It is 192 pages, priced at $3.95. The cover is by Les Edwards. It has been out of print for 22 years. There is no digital edition.

I haven’t read this in ages. Come to think of it I haven’t read any Simak in a long time. Need to rectify that. I love the Corgi cover.

I’ve read quite a bit of Simak, mostly in high school and undergraduate days. I’ve not read this one, although it’s on the shelf. Like Fletcher said, I need to rectify that.

My single favorite Simak novel, I think. I can’t exactly tell whether it holds up on rereading: the fog of nostalgia is too dense whenever I open the book. But I always enjoy Mr. O’Toole’s unsanitary obsession with “sweet October ale”, and Sylvester, and most of the other stuff, cartoony or not.

The cover most familiar to me is the Berkeley one. It had a laudatory quote on the back by a guy named Fritz Leiber–probably the first time I saw that name.

> I love the Corgi cover.

You can’t go wrong with Bruce Pennington. I’ve never even seen a copy however, so I have no idea how hard it might be to find one!

> I’ve not read this one, although it’s on the shelf. Like Fletcher said, I need to rectify that.

There’s a lot of early Simak I haven’t read, including TIME AND AGAIN, EMPIRE, and ALL FLESH IS GRASS. I’ve been re-reading some of his short fiction recently. “The Big Front Yard” dazzles me every time.

> the Berkeley one… had a laudatory quote on the back by a guy named Fritz Leiber – probably the first time I saw that name.

James – you know, that’s an interesting observation. I was doubtless familiarized with many writers by seeing their blurbs on the Asimov and Van Vogt paperback books I was reading, before I stumbled on their own works. I wonder if that was part of the reason for using them?

I had a copy of that Corgi paperback, 40-odd years ago, but i remember almost nothing of the story. I must read some Simak again.

I have the DAW edition with the cover by Kelly Freas, and love that one. I mean, a dragon with a smile. This is good Simak, I recently read a collection of his stories – he’s very good in short length – and it included “The Big Back Yard” which is great.

I think “The Big Front Yard” may have been the first Simak I ever read, in the Asimov edited Hugo Winners.

> I must read some Simak again.

I think that’s the unifying theme of this entire comment thread. It should be the title of my next Vintage Treasures article.

> I recently read a collection of his stories – he’s very good in short length – and it included “The Big Back Yard” which is great.

I agree completely that he’s exceptionally good at short length. His collections are where I fall down as a Simak collector. I thought I was doing pretty well by having 12 of his English-language short story collections… but according to the ISFDB, he published 21:

The tough short story collections for Americans to find are the half-dozen or so Methuen collections that were only published in the UK, Canada and Australia. There’s an Australian seller offering several on eBay for AU $99.99… too rich for me, but at least he was kind enough to post pics so I can see them: 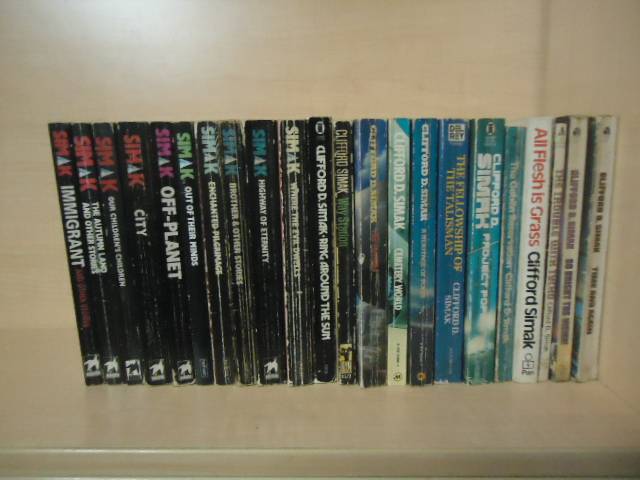 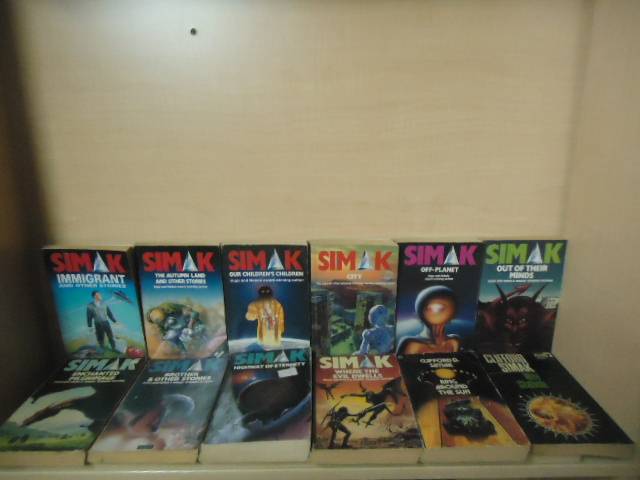 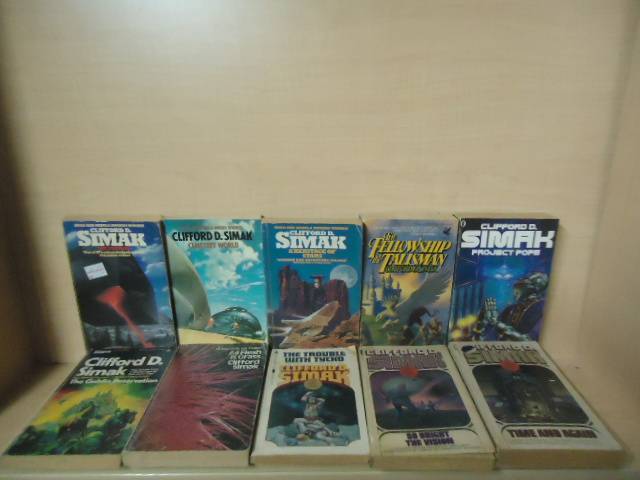 For the record, the books in those pictures are:

And the eBay lot is:

> I think “The Big Front Yard” may have been the first Simak I ever read, in the Asimov edited Hugo Winners.

First Simak I ever read was SHAKESPEARE’S PLANET. Pretty mind-blowing book to read at 11. But “The Big Front Yard” made me a Simak fan for life.

Earlier this century someone was beginning a series of volumes intended to collect all of his short, but I think it fizzled out. That’d be a lot of stories–he had a career of nigh-Williamsonian length.

“Desertion” was the story that showed me SciFi wasn’t only rockets and ray guns. I’m going to dig books out of storage right now.

> Earlier this century someone was beginning a series of volumes intended to collect all of his short, but I think it fizzled out.

Quite right. You’re thinking of John Pelan’s Darkside Press, and THE COLLECTED STORIES OF CLIFFORD D SIMAK. They managed two volumes before (I think) going out of business:

Phil Stephensen-Payne provided story notes. Both books are still available, although they’re getting a little pricey now. I bought the first one, and was very impressed (although I was hoping they would collect Simak’s early pulp stories first, since they’re almost impossible to find.) 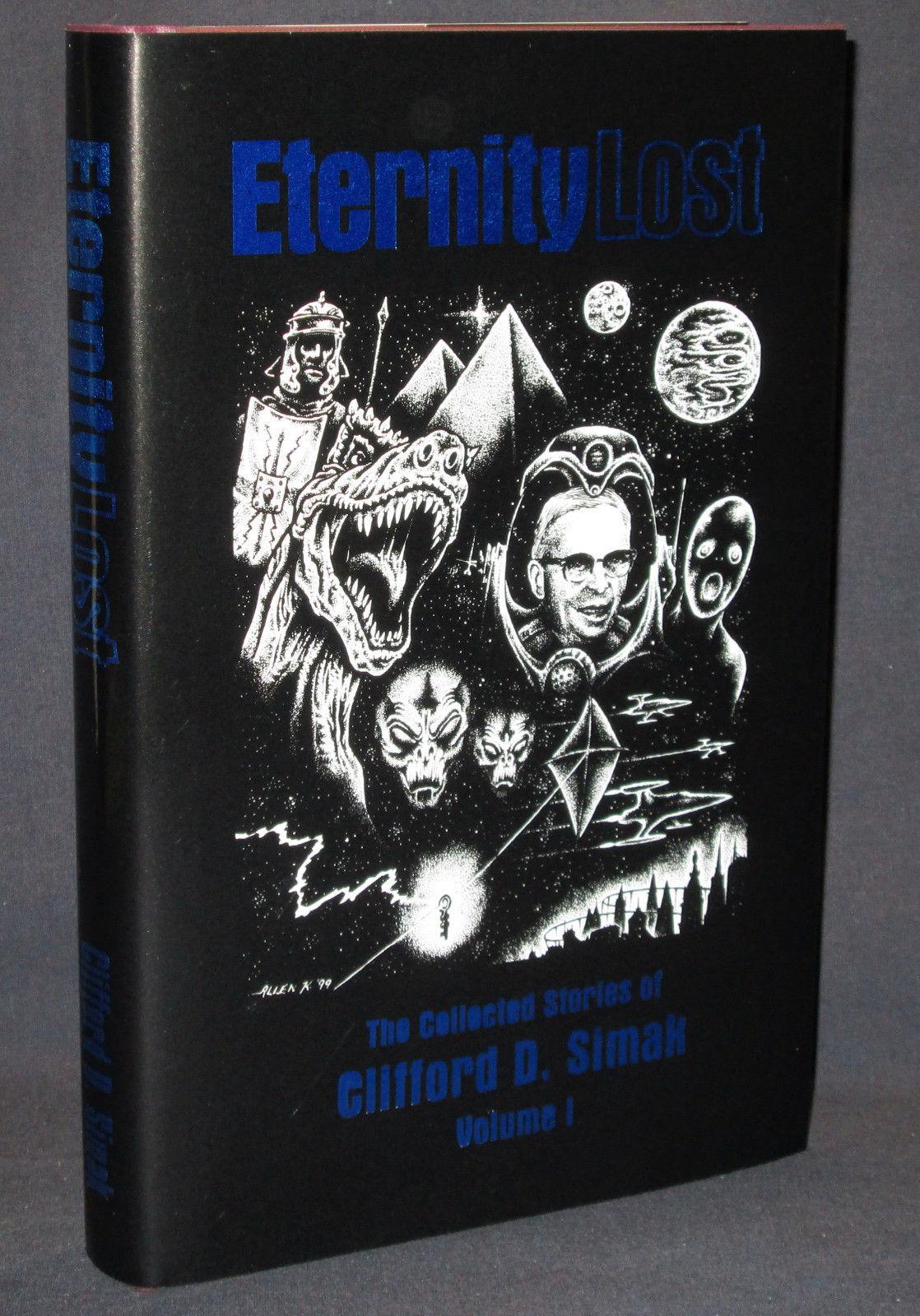 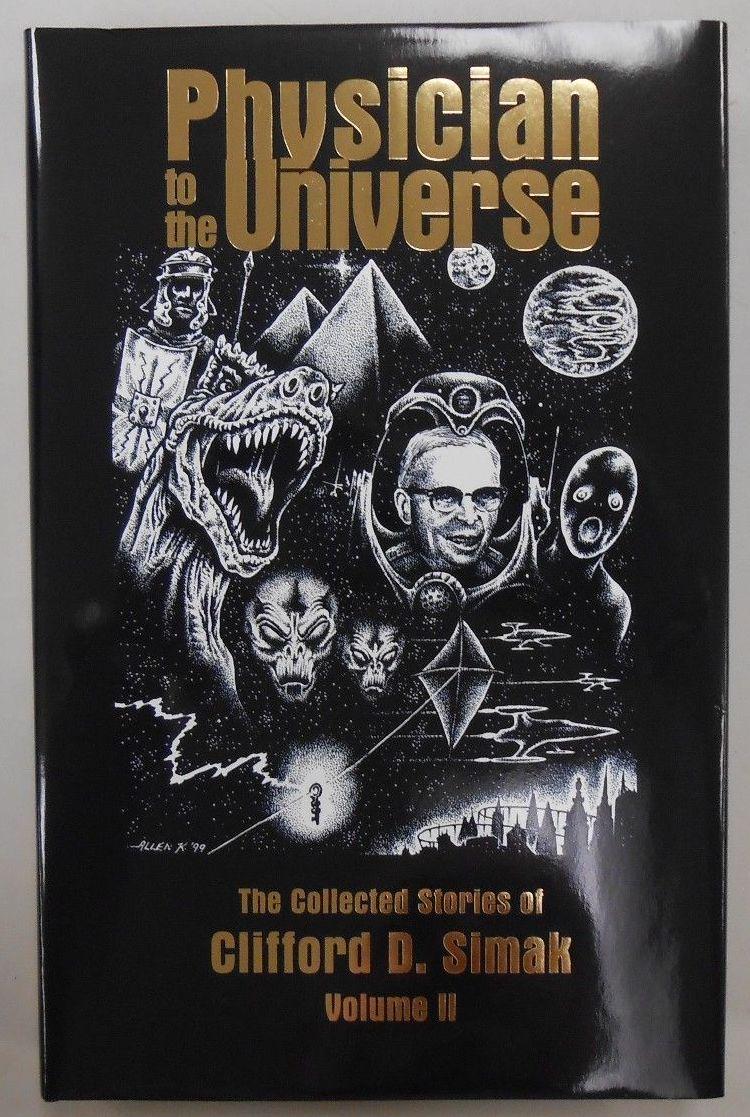 The cover art was by Allen Koszowski. There were no paperback editions.

However, I just discovered that there IS a paperback series in the works dedicated to reprinting Simak’s short fiction. The first volume, I Am Crying All Inside and Other Stories: The Complete Short Fiction of Clifford D. Simak, Volume One, will be released by Open Road Media On October 20. Among other stories, it will include the previously unpublished “I Had No Head and My Eyes Were Floating Way Up in the Air,” which was originally written for Harlan Ellison’s The Last Dangerous Visions.

> I’m going to dig books out of storage right now.

That’s the spirit! If you ever find yourself in the mood to review some Simak short fiction for your Tuesday column, I would be delighted.

[…] and while my hand hovered over several other enticing choices, including The Werewolf Principle and The Goblin Reservation, ultimately it was Cemetery World that proved […]