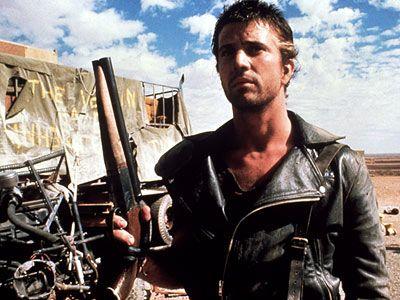 Among the genre of world-gone-mad movies, The Road Warrior (TRW) is pretty much the standard by which all others are measured — for good reason! Easily the best of the Mad Max trilogy, it doesn’t suffer from the technical issues and slow plot of Mad Max, nor the excesses of Beyond Thunderdome. TRW is a movie lathed down to a simple gleaming core: good guys inside the refinery, bad guys outside. And, for a bit of a spark, Max is also on the outside and like the bad guys, he wants in to get that fuel.

Whereas MdMx drops the viewer straight into a world going to hell, TRW includes a bit of a voiceover that gives all the introduction that you need — and really, it is mostly the background of the world. An interesting thing about TRW is that you don’t even have to see Mad Max for it to make sense, and even though that intro touches on Max’s history it almost doesn’t have to. Max Rockatansky is defined almost entirely by his actions.

Did I say action? I meant ACTION! Max vs. Wez! Max rescuing the scout! Max retrieving the rig! Max making his getaway in the last V8! The Big Chase!

A thing they do in this movie, and do well, is that although Maxis the MC, the movie is really about Papagallo vs. The Humungus, and Max is just drawn in and plays his cards close to the vest, and [spoiler alert] he never actually picks sides. He just says he’ll drive the tanker, not that their plan or goal way of life is any better than anyone those of the people outside.

Little touches jump out at you in repeated viewings (I’ve seen this movie something like four times): the homespun clothes of the good guys as opposed to the leather and animal skins of the bad guys. The fact that the Humungus gives Wez essentially the same speech that Papagallo gives Max. That there are women and even some kids in the Humungus’ entourage — maybe even some cops (or at least guys that are dressed like cops from Mad Max). 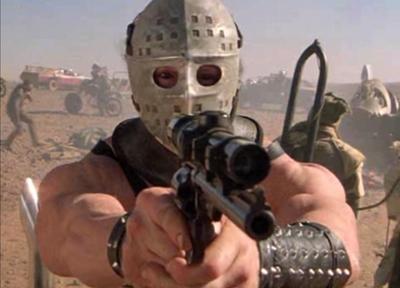 The main part of the movie is the Big Chase and one of the most interesting things about it is how ineffective the defenders are at defending the rig! That is something that I don’t think that a modern film-maker would do (although I guess we’ll see with the upcoming Mad Max: Fury Road).

They take out one chase car with a Molotov cocktail, and one chase car is a victim of its own success, crashing and rolling after they catch the truck with a grapple (but in the process it pulls Papagallo’s main lieutenant to his death) and that’s really it. The Warrior Woman (that is actually her name in the credits) shoots a guy but doesn’t kill him and then she dies trying to give the mechanic help he doesn’t need, and he then dies trying to save her (presumably dead) body.

One of the most heart-wrenching scenes is that after all that the truck roars into the horizon and there are still easily a dozen pursuit vehicles left — a very direct attempt to show a palatable level of futility.

And speaking of futility [another spoiler alert] Papagallo is no fool, he doesn’t assume that Max is actually on his side. They never tell Max the Real Plan.

It isn’t necessary to see Mad Max first, and in a way it might even be distracting. Max really is just a guy outta the wasteland. Defined by his actions with “Lose a little family?” being the only line that ever really gets a rise out of him. Humungus also reminds Wez that everyone has lost someone they love — then he chokes him out. 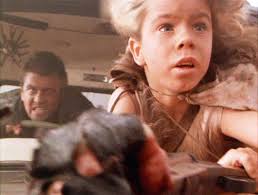 I said that maybe you shouldn’t watch Mad Max first, and I stick to it, but if you DO watch it (either first or after), I want to point out that the SPIRIT of Mad Max is paralleled in The Road Warrior — the weirdness (the gyrocaptain, the fact that Wez’s motorcycle gang really is a bunch of gay bikers, all the outrageous nonsense Humungus says, the picture of Humungus’ parents in the gun case, “Three days to fix it.” “You’ve got twelve hours.” “Okay!”), the curmudgeon, and the ever-expanding shades of grey).

As with Mad Max, I recommend subtitles if for no other reason than you can hear all the ludicrous stuff that Humungus is actually saying (and some of the undeniable truths he says, after all, “If you are here, you are not without sin”), and make out the utter nonsense that poor Papagallo has to tolerate from his ungrateful band of idiots.

Also surviving from Mad Max is giving screen-time to the differently-abled. Papagallo’s main mechanic from the inside is paralyzed from the waist down (honestly, I didn’t realize that until the second time I saw this movie), Humungus is burned, gyrocaptain is a little off-kilter, the Toady has one eye and later loses four fingers, and the Feral Kid can’t even speak.

And it is interesting to see that the trend of using foreign actors as the villainous leaders carries over from the first movie — Toe Cutter was East Indian, and Humungus is played by a Swede (which is why he sounds so weird, a Swedish/Australian accent through a mask).

Max also remains in shades of grey — never says that he wants to join, just that he’ll drive. They never let him on the real plan — they basically use him. Which sounds like a crappy thing to do, but he uses the gyrocaptain and never seems to recognize that he is his one and only friend. Who is using whom? And if you watch closely you can see the good guys moving drums of fuel in the background when Max isn’t looking!

Not to read too much into the film, but in MdMx the Toecutter (the big bad guy) runs into a truck while trying to escape Max’ V8-powered vengeance; but in TRW the Humungus [spoiler alert] drives straight into Max’s rig — with a nitrous oxide boost! On the one hand, I suppose that he’s hoping that Max will turn and jack-knife the truck. But there is an alternate explanation: that the Humungus is not just willing to kill to get the gazzaline, but he’s willing to DIE (and kill Wez, his lieutenant at the same time!) to get it.

Which is exactly what Papagallo and the other unlucky defenders of the rig are willing to do — die to pull this ruse off so that that pack of ungrateful idiots can get a chance at a new start. And perhaps Humungus is willing to die to give his cobbled together group of murderers and killers the same chance.

That final shot of Max, all banged up, one eye swollen shut, with the sand pouring out of the tanker is one of the great shots. The movie just leaves you wondering what he’s thinking.

Adrian Simmons is an editor for Heroic Fantasy Quarterly. His last Belated Movie Review for us was Blood of Heroes.

Great review. I’ve seen the trilogy countless times. As a teen-ager me and my gearhead buddies fantasies about living in Max’s world.

Another thing I loved about these movies how the follow the preceding movie so perfectly, like Max takes an ugly gunshot to the knee in Mad Max, TRW, he has metal brace on that leg, Beyound Thunderdome, he’s down to a wrapped knee, his hair is longer in each movie, whatever vehicle, is on hand, he’s using at the start of the next movie, etc..
One thing I never figured out, some of the actors in TRW are in BT, but not sure if they played same character, and why was there a Master Blaster in both movies?

one other bit of trivia- I read that Mel Gibson got the part as Max because prior to his trying out of the part, he’d been mugged, and the director thought he looked good beat-up.

Kid_Greg, I remember (barely) that Mad Max was available after the Road Warrior came out. I know I saw MM after TRW.

The important thing to remember is that “Mad Max” is a “Peak Oil” movie – society breaking down on the lack of resources – not really a “Post Nuclear” movie, though it marketed itself in the USA well with that message.

The one that set it on the map, Road Warrior, was heavily inspired by “Hero with a thousand faces” as was Star Wars and countless other movies and novels till “Yet another pointless re-telling of the Heroes Journey” became so cliche it lead to saturation and de-construction. But this movie series had an attitude and told a story.

The first movie was better ‘peak oil’ and inspired by the OPEC thing hitting Australia harder than it did the USA – they did have motor gangs stealing gas then fighting each other over it. The second movie was essentially “When this civilization passes, how will it be remembered?” in terms of those books on mythology. The third expanded on that.

Frankly I’m not too optimistic about this new movie. IMO its more “Buy up the sheeple’s childhood memories, chew it up and excrete it on them, leaving a good wet spray to insult them” like most of the “Re-make” culture we got now.

BTW – remember Watchmen the comic book/movie – that “Advise not start with cuffs, never make it in time” that the weakling wimps couldn’t let show on the big screen – well spoiler alert, this is the inspiration…

GreenGestalt, they never really say just what has happened to the world, at least in the first two movies. It is the third one that we get the idea of a nuclear war– perhaps between the USA and Russia. However, the peak oil as an inspiration for the entire series is something that I can get behind.

I notice that the upcoming movie has something to do with water shortages.

I have strangely high hopes for the movie, since one of the original writers is involved. Tron Legacy didn’t let me down!

As for “Watchmen”, I just assumed that they didn’t put the handcuff scene in it because everyone would think they ripped it off of Mad Max! Plus, Rorschach cleave’s the guy’s head open! And the film makers had the stones to show Rorshach killing the two dogs– ballsy! Good guys hardly ever kill dogs in movies (unless it is a mercy killing as in “Where the Red Fern Grows”.

What did the dogs do but eat what they were fed? Doesn’t matter. Rorschach cold and pitiless as universe.