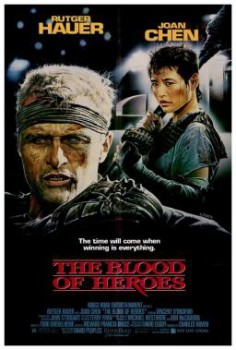 The 80s were quite a time for movies (word has even reached me that certain millennials have discovered the decade over at Tor.com), and some of my favorites are firmly rooted in that era — and one of my favorites from that decade is the 1989 Rutgur Hauer, Joan Chen, Vincent “REH” D’Onofrio effort The Blood of Heroes (BoH).

BoH stands both above and beside the many other dystopian movies for being a post-apocalyptic sports movie. And here’s the thing — that is ALL it is.

The apocalypse that put the world into such a sorry state? Not discussed — too busy trying to put a dog skull on a stake.

The high-tech dingus that will turn things around? That doesn’t happen in this movie — too busy winning matches in the hinterlands.

The guy-who-knows-the-only-weakness-of-Lord Motherraper? Also does not happen. Gotta win matches in the hinterlands to get into the Red City match.

But surely Joan Chen is going to get revenge on Lord Motherraper for murdering her family when he was roaming the world for steel and they wouldn’t name another target, a military target.

NO! Her family is alive and well, she just wants more out of her life than sustenance farming. And that means being a kwik for a team of juggers, sticking dog skulls on stakes in the hinterlands to win enough matches to play in the Red City and the big leagues!

It is, like a lot of movies that I like, really just ground down to its solid gleaming core — local girl makes good on threat to join struggling Jugger team and make good! 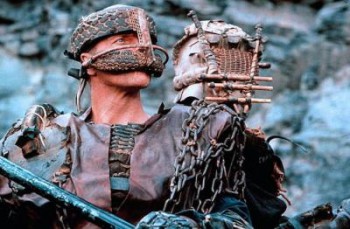 What is amazing is that given all the movie is not and what little of it there is — it strikes the perfect amount. Any more and it would have been too much!
As it is, it draws you in to the small story and makes you care about the outcome.

It is also one of those rare gems — a cheaply made movie that doesn’t look cheap. It is a poor world, a land of sustenance farmers and one wealthy city that we get to see — and how they save money on the Red City scenes is quite clever.

Okay, there is one sub-plot involving petty revenge by a petty noble sicking one of the Red City Jugger champions on poor Rutger Hauer, but even that is pretty small, and it leads to Australian actor Max Fairchild giving one of the best lines of the (or any) movie.

Adrian Simmons is an editor for Heroic Fantasy Quarterly. His last Belated Movie Review for us was Mel Gibson’s Apocalypto.

Oh yes, 80s movies are amazing. especially when it comes to Fantasy and Sci-Fi movies. If you extend the period a little bit to 1978 and 1991, almost all my favorite movies fall into that era. And I saw all of them much later, having been too young to see any of those until the late 90s.
http://spriggans-den.com/?p=442

The apocalypse that put the world into such a sorry state? Not discussed — too busy trying to put a dog skull on a stake.

Beautifully put! This is such a great film. It’s a rare sports film that can connect with me as a viewer. Rare and weird — I loved Lagaan, a Bollywood musical of epic length and whimsical tone that purports to explain how the game of cricket came to India. I’m quite fond of Drumline, in which a college’s football team is a sort of incidental appendage of its heroic marching band. But Blood of Heroes is my favorite, for the way it reveals a vastly changed world by focusing so faithfully on the lives and limits of a handful of characters.

And the scene in which we find out what passes for hotel accommodations in Red City is one of the most memorable scenes in all of 80s cinema, especially because the characters are so utterly unfazed by something so extreme.

Martin- there is a certain indescribable quality about good (or even endearing) 80s movies. All made well before you could CGI your way out of a crappy story, ruin a good story with crappy CGI.

Sarah- almost everything about the Red City is awesome. I’ve also heard that if you tilt your head and squint the movie KNIGHT’S TALE is mostly a sports movie– the sport being jousting.

The craziest thing about this movie is that it’s inspired groups of people, primarily in Germany, it seems, to actually start their own Jugger leagues (look it up on Youtube). Obviously not as brutal as in the movie, but still…