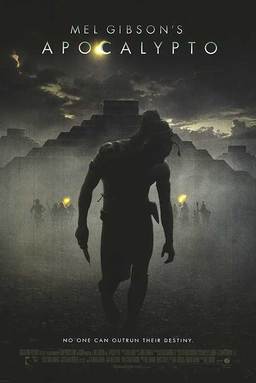 I recall that 10,000 BC (Belated Movie Review #1) and Apocalypto came out at roughly the same time. My recall is wrong! Apocaltypto is from ’06 — a full two years earlier than 10KBC!

Still, it was a stone-age adventure movie and has been on my list to see for almost a decade, so I finally did. Like 10KBC, I’m going to RECOMMEND it. Conditionally, as you’ll see below.

A lot of work went into this — cast of thousands! Build an entire Mayan city/prop in the jungle! Translate “I wanna dip my balls in it!” into Mayan! What it is NOT, outside of the first 15 minutes, is particularly fun or pleasant or uplifting. Leaves you kind of feeling like you just watched Leaving Las Vegas, only with more ripping out of still-beating hearts.

The plot is very similar to 10KBC. A group of hunter gatherers in forest are going about their lives, hunting, gathering. A group of slavers from the nearby city-state sweep into the village in a pre-dawn raid. Grizzly fighting ensues, with the hunter gatherers on the losing side.

Things get much grimmer as the slaves are marched off to the city, through the city, and right up to the pyramid in the middle. Still-beating hearts and decapitations and Jaguar Paw (the main character, although it takes a while to figure this out) is next on the block (literally) when an eclipse starts up.

With the sun-god being (apparently) satisfied, they don’t need to sacrifice anymore people, so the slavers take the remaining captives to the edge of town, get all their ranged weapons out, and tell them that if they can run through the pitch and into the cornfield without getting shot hey! Freedom! Turns out the slavers are pretty good shots — however, there is also one of their number who is a “finisher” – the guy with the big obsidian-bladed club whose job is to kill the ones who get arrowed or speared or stoned or whatever.

Jaguar Paw gets shot through the side, but still has enough fight left in him that he scuffles with the “finisher” and manages to kill him — problem is that the finisher is the slaver’s leader’s son. So they are hot on his trail for vengeance. Leading to a lot of running through the woods.

Back in his element Jaguar Paw gets a few lucky breaks, starts fighting back, and Crom grants him sweet, sweet vengeance!

It’s a pretty standard plot, but the movie throws a lot of curveballs — for example, the slavers actually have quite the uphill battle during the raid. They want the young hunter-gatherers alive, so they are trying to club them, or net them, and the young hunter gatherers have no reservations. The slavers, for all their brutality, aren’t that much interested in the children one way or another.

The Mayan city is almost worth the cost of the movie. There is so much stuff going on — the machinery of the civilization is cranking on with a large chunk of it only vaguely aware and mostly unconcerned with the whole river-of-blood human-sacrifice thing going on at its core (which I think is more of an Aztec thing — I suspect the movie makers got “the look” of the Mayans right, but beyond that this movie is probably not what you’d turn to for historical accuracy).

For all its action movie trappings, it doesn’t do a lot of the clichéd stuff we’ve come to expect; where the hero and the villain boss climb to the top of the tallest mountain and have a final fight there (I’m looking at you, Hobbit: The Battle of Five Armies). Plus, there are actually two villains, the sadistic “Middle Eye” (who, for reasons I don’t understand is the guy on the movie poster) and the I-wasn’t-going-to-get-all-sadistic-until-you-killed-my-son “Zero Wolf.” Zero Wolf is the leader of the slavers, and a hard guy to find sympathetic… but next to Middle Eye, he is.

Of course, Jaguar Paw takes an almost superhuman amount of punishment and runs for like 12 hours straight through the jungle… almost seems like it would be something that Leigh Brackett would have written (and I mean that in a good way).

And poor Jaguar Paw is left with two more guys to kill after he deals with Zero Wolf and Middle Eye!

Spoiler alert: Jaguar Paw leads the last two slavers away from the wreckage of his old village (because that’s where his wife and two sons are still hiding) and to the sea — where they are about to off him when a bunch of Spanish ships sail in. While the two slavers are gawking, Jaguar Paw makes a break for it and gets away.

Quite a bit has been made of this, with strong arguments being made that it implies that, given all the brutality of the Mayans, they deserved to be conquered by the Christian Invaders. While it is a good argument, I don’t buy it. I think this is just another iteration of the “Man is too greedy to know happiness” bit from the beginning, just from a different group this time.

The machinery of the Spanish Empire will be clanking along, with most people unaware of the brutality at its margins. Jaguar Paw wisely keeps away from these bearded strangers.

I really liked this movie and felt it demonstrated that Gibson has genuine flair as a director (whether you love or loathe the guy personally): sure the plot could have been written on the back of a matchbox, but the decision not to have the characters speak in English (with all the inevitable colonial baggage doing so would bring) and the Mayan sequence (in terms of world-building) really sold it for me.

Yeah, I viewed the ending in a different way, as in, “You think things were bad before, it’s about to get genocidal.”

I liked this movie too, but fair warning, some of the violence is pretty brutal. It didn’t bother me, but not good for young kidlets I think.

As I said in the 10,000 BC article, I think the best approach would be to just treat it as an imaginary-world sword & sorcery movie.

And maybe lop off the last 15 seconds — the Conquistador ending just didn’t really do much for me.

I liked the fact that they did the whole thing in subtitled Mayan, and I was impressed with the scope of the worldbuilding, but yeah, historical accuracy wasn’t this movie’s strong suit — I think most of the individual elements were pretty realistic, but they were kind of combining bits & pieces from many different eras. Like having Arthur and his court ride out from Camelot, and they crest a rise and there’s modern-day London with the London Eye looming over the Thames, just upstream from a village of woad-painted Picts.

Most definitely not a movie for the younger set. For me, the worst part was actually when they were butchering the whatever-that-animal was right at the beginning.

I wouldn’t say it was the Christians who conquered the Mayans as much as it was the small pox.

Actually, one of the issues with the movie is by the time that the Conquistadors were arriving, the Mayan empire had pretty much collapsed; the Aztecs were the preeminent power at the time.

Thanks for the various comments. While the ending may rub some people the wrong way, I kind of liked it. Jaguar Paw is the lucky beneficiary of one once-in-a-lifetimes event, and one once-in-a-hundred-lifetime events in 24 hours, which somehow I found awesome instead of hokey.

I also think I know why “Middle Eye” is the guy on the poster- Gerardo Taracena seems to be one of the only professional actors (as in he does it for a living) in the entire movie, so someone probably wanted him up there for the star power (for the Mexican and South American markets).

[…] Adrian Simmons is an editor for Heroic Fantasy Quarterly. His last Belated Movie Review for us was Mel Gibson’s Apocalypto. […]