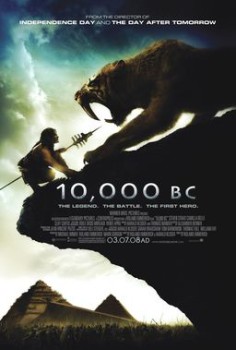 I was interested in 10,000 BC (10KBC) when it first came out, but somehow never got around to seeing it. Finally rented it. I am going to RECOMMEND it — with the caveat that if you go in with an understanding that this is a pulp fantasy lost-world adventure.

As we all surely know, some movies are good, some are bad, and some are okay but hampered by their advertising campaign (or lack thereof, in the case of John Carter). 10KBC fits in the latter category. Here’s the thing. If you’re going in anticipating something kinda historically accurate, like say Quest for Fire*, you’ll be disappointed.

Framing is what this movie needed! It needed to start with a couple of archeologists unearthing a golden pyramid topper and their elation being clouded by the fact that it is 5,000 years older than the oldest pyramid. Dum dum duuum! Or, alternately, a 1940s guy pacing in his room next to a typewriter, wracking his brain for ideas — baby needs a new pair of shoes and all that — taking a big drink of something brown and boozy then snapping his fingers. “Ice Age Atlantean adventure!” he shouts, then starts typing.

Did I mention the Atlantean influence? See, that’s what the ads should have communicated. Once you realize that the there is an Atlantean lost-world/we-are-the-gods tie-in, all is good! It’s as if you’ve had something brown and boozy, and can thus forgive a lot in a movie. Had I been in charge of the movie, much less its advertising, I would have mentioned it waaaay earlier.

Anyway, if you want your stone-age adventures (and at HFQ we most certainly do as, exemplified by Last Free Bear and Living Totem), then 10K BC is for you!

* Yes, I realize that “Quest for Fire” isn’t actually that historically accurate.

Adrian Simmons is an editor for Heroic Fantasy Quarterly. His last article for us was Frodo Baggins, Lady Galadriel, and the Games of the Mighty. See more of his thoughts as the HFQ Facebook page.

I’m probably going to get dragged over the coals for this one, but the reason I didn’t like the film was that the heroine, assuming you could call her that, was captured and dragged along as a slave for the entire film but never raped. Now that isn’t me advocating rape in ANY way, it is simply looking at the facts, the most beautiful cave woman ever, with eyes that you could fall into and never come out, is captured by a more ‘advanced’ civilization’s bloody slave hunting mercenary/soldiers and never touched. Doesn’t make any sense in any kind of historical record of the treatment of female slaves. I’m not asking to see such horrid acts on screen, simply direct ‘around’ it while letting the viewer understand the terrible weight of ancient worlds consequences would greatly help the historian in me suspend the other more fantasy subject matter of the film.

I completely understand your point. But I look at 10,000 BC as the fantasy equivalent of a “cozy mystery.” My mom (and my wife) love cozy mysteries. Sure, there’s a murder, but there’s none of the bloody business of murder (or visceral forensics, for that matter.) These books appeal to a large segment of the market who have no interest in gritty realism the way you and I do.

I think the same is true of a lot of fantasy films, even great ones like RAIDERS OF THE LOST ARK, HARRY POTTER and THE PRINCESS BRIDE. The focus of these films isn’t on the bloody face of combat, or the truth of slavery. They’re closer to modern fairy tales than anything else. And that’s exactly what the audience wants and expects.

Put a rape in 10,000 B.C, realistic or not, and I think it would have fundamentally damaged the movie and perhaps even betrayed much of the audience.

I loved this movie. Its sensibility was essentially that of an an Edgar Rice Burroughs story, and with all due respect, Scott, whenever you read or watch an ERB tale, the historian in you just needs to go away and play a couple of rounds of golf.

I should probably revisit this at some point. I like the idea of treating it as the fevered imaginings of some 1930s pulp author — maybe use an excerpt from The Whole Wide World as a prologue.

Or just treat the whole thing as imaginary-world sword & sorcery. Which is probably also the best way to treat Apocalypto, come to think of it.

By the way, I should have mentioned that the “Terror Bird” scenes were probably some of the best of the movie. The part where they climb up the trees? Chills!

Scott T., wasn’t one of the heavies hoping to keep the girl for himself? I seem to recall that, but it has been a while since I watched this.

That dynamic in which a female character is captured and enslaved by villains, yet implausibly never touched, stands out for me in a lot of films (though I’ve never seen this one). Usually, there’s some moment in what does appear on screen when my brain points out to me, “This is when, in a more realistic story, things would have turned really ugly,” and then the story as presented reasserts itself.

Offered a choice between a film with an implausible omission of violence and a film with a plausible but graphic depiction of violence, I’ll pick the omission, every time. I can see a case that could be made that the latter is better storytelling in some ways, but I think poking the audience’s collective amygdala with a stick is something that should only be done with a very good reason.

[…] recall that 10,000 BC (Belated Movie Review #1) and Apocalypto came out at roughly the same time. My recall is wrong! Apocaltypto is from […]