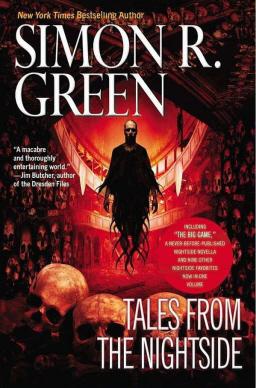 Simon R. Green’s first Nightside book, Something from the Nightside, was published a dozen years ago. Since then there have been eleven more; the most recent was The Bride Wore Black Leather (2012).

I always thought Nightside was a fascinating setting, but I’ve never had time to try one of the novels. But Tales from the Nightside, the first collection in the series, offers a chance to take a short trip to Nightside — just what I’ve been looking for. It includes ten stories, including “The Big Game,” a novella that has never before been published.

Welcome to the Nightside. It’s the secret heart of London, beating to its own rhythm, pumping lifeblood through the veins of its streets and alleys hidden in eternal darkness, where creatures of the night congregate and where the sun is afraid to shine. It’s the place to go if you’re looking to indulge the darker side of your nature — and to hell with the consequences.

Tales from the Nightside presents ten macabre mysteries that shine a dim beam into the neighborhood’s darkest corners to reveal things that should never come to light. Take a walk with such deadly and dangerous denizens of the Nightside as Razor Eddie, Dead Boy, and Larry Oblivion as they encounter things even more inhuman and inhumane than they are. And join John Taylor, the PI with a knack for finding lost things, as he confronts Sir Francis Varney, King of the Vampires, in a never-before-published novella-length adventure.

Tales from the Nightside includes the following stories.

It’s a good collection, although the books are short enough that you should probably just go ahead and read one or two of the novels. Skip book 1 (it was so so) and start with book 2, and you’ll be in business.

I fell in love with the Nightside books a few years back, and was very very sad to see him stop 🙁