Back in September, I wrote a Vintage Treasures article about Clifford D. Simak’s Cemetery World. Simak is one of my favorite authors and much of his work — especially his early pulp fiction from the 30s and 40s — is tragically long out of print.

While I was researching the article, I discovered to my delight that Wildside Press had produced several slender volumes reprinting some of Simak’s pulp short stories, as part of the Wildside Pulp Classics line. I mentioned two: Hellhounds of the Cosmos and Other Tales From the Fourth Dimension and Impossible Things: 4 Classic Tales. As soon as I was done with the article, I ordered a copy of the former. The paperback edition was just $6.99 and it was hard to resist. It’s hardly the comprehensive Complete Short Stories I might wish for, but it did include the title story, a novelette from the June 1932 Astounding Stories that had been uncollected and out of print for nearly 80 years. And that was pretty cool.

When the book arrived, I was very pleased with it. It’s an oversized trade paperback with a glossy cover and quality paper. As I expected, it’s quite short — 142 pages — but it includes four complete tales, and the price is right.  It also includes an (uncredited) introduction, as well as a nice review of Simak’s career and the themes common in his work. 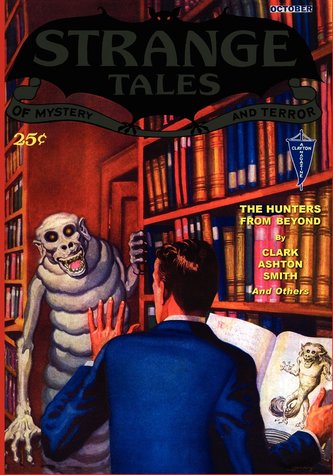 Expanding my search, I quickly discovered several other gems — including an inexpensive reprint of Robert Weinberg classic hardcover anthology Far Below And Other Horrors, originally published in a limited hardcover edition in 1974, now available in a handsome trade paperback for just $15.95.

Many of you are aware that Wildside has a fairly extensive pulp magazine reprint library — they’ve produced dozens of facsimile reprints of some of the most famous pulp magazines ever published, including Strange Tales, Weird Tales, Astounding Stories, Spicy Mystery, Black Mask, and others. Just like their short fiction collections, these are high-quality productions, with gorgeous cover reproductions and all the original artwork. These tend to be longer (150-250 pages), but still reasonably priced ($15-$20).

That’s a lot of pulp goodness. If you’re a fan of the pulps — or just curious what all the fuss it about — this is a great way to sample classic pulp fiction without having to pay premium prices. Or worrying about the magazine disintegrating in your hands.

There are some drawbacks to Wildside’s reprint strategy, however. Chief of which is that it seems to be pretty disorganized. There’s not a lot of rhyme or reason to what they’ve reprinted.

A fine example of this is the two Clifford D. Simak reprints I mentioned above: Hellhounds of the Cosmos and Other Tales From the Fourth Dimension (published 2011) and Impossible Things: 4 Classic Tales (2010). I ordered the former because it was less expensive ($6.99 vs $9.95), but both are still in print and available. You have to look very closely to realize that both contain the exact same four stories.

Why publish two collections less than 6 months apart, with different covers and titles, that have the exact same contents? Who knows? There are several possible explanations, but I suspect disorganization.

In any event, Wildside still gets top marks for a very impressive back catalog of pulp reprints of all varieties. If you’ve always wanted to sample classic pulp fantasy in an attractive and inexpensive package, now’s your chance.

Wildside is also the publisher of Sherlock Holmes Mystery Magazine, which has included something from yours truly a couple of times…

I love what WildSide does but they are absolutely disorganized. Their own webpage is .. well .. pathetic. They also acquired Borgo Press awhile back. It sure would be nice if they would at least have the option to see books by imprint, etc.

When I queried about this, they replied that is was faster to have a reader read the old paperback and record them, than to convert the print to ebook.

OK. But, why haven’t they circled back and done audio on the first two books? When are they going to get around to the last 3? Do they even have plans for ever offering the last 3 as ebooks?

On the print side, when I did order a few print books from them, I was a bit disappointed to see that they were mimeographed from the old paperback (I guess.) Seeing as how the book is larger than the old paperback, there are ridiculous margins. And, they were two in a series and they weren’t even the same dimensions!

Not all their print books have done this. But I’m a little shy ordering pricey physical books from them sight unseen – unsure what I’ll end up with.

I love what they do – I just wish they were a bit more modern & professional about it.

> Wildside is also the publisher of Sherlock Holmes Mystery Magazine, which has included something from yours truly a couple of times…

Great stuff! I wasn’t aware of the magazine – but Wildside has all 8 issues still available for sale:

Is it as fun as it looks? And what did you write for them?

> I love what they do – I just wish they were a bit more modern & professional about it.

No argument. From what I understand, WIldside is a tiny outfit — certainly in comparison with what they deliver, anyway. I vacillate between astounded at their amazing output, and frustrated that the titles I care about seem to have been produced so quickly. I guess one is a consequence of the other. 🙂

Either way, Wildside deserves support, and their best stuff is very good indeed. I was very pleased with the quality of HELLHOUNDS, for example.

SHMM is pretty Holmes focused, but branches out with a little other mystery as well. You have to to stay alive against Alfred Hitchcock Mystery Mag. I’m not as big a magazine fan as you are, but I think it’s solid.

My Nero Wolfe and ‘Doyle’s influences in the Resident Patient’ BG posts are taken from WHMM essays I wrote.

Couldn’t get a short story in print, though…

[…] is the first issue since 1997; its new publisher is Wildside Press, publisher of Adventure Tales, Wildside Pulp Classics, and Sherlock Holmes Mystery Magazine. The cover is by Dusan Kostic, and the back cover is a piece […]