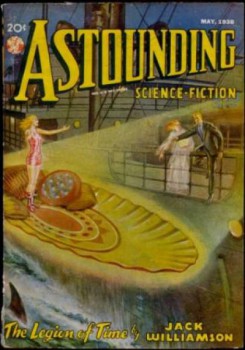 Andrew Liptak at Kirkus Reviews has posted a nice retrospective of one of the most influential figures in the history of our genre: John W. Campbell, editor of Astounding Science Fiction and the short-lived Unknown magazine. Here’s a snippet:

In 1938, science fiction would run into another personality who would change science fiction again: When 28-year-old author John Campbell Jr. was hired to edit Astounding Magazine. Campbell’s influence in the magazine market is commonly cited as the beginning of the so-called Golden Age of Science Fiction, and represented a major shift away from the conventions of Gernsback’s pulp era…

With the release of the July 1939 issue of Astounding, the gloves came off. The issue’s table of contents contained a number of high quality stories from new and regular Astounding writers: “The Black Destroyer,” the first published story by A.E. van Vogt; “Trends,” Isaac Asimov’s first sale to the publication; “City of the Cosmic Rays,” by Nat Schachner; “Lightship, Ho!,” by Nelson S. Bond; “The Moth,” by Ross Rocklynne; Amelia Reynold’s “When the Half-Gods Go;” and “Greater than Gods,” by C.L. Moore.

Subsequent issues of Astounding featured a regular stable of authors who have become household names: Theodore Sturgeon, Robert Heinlein, L. Ron Hubbard and Isaac Asimov, amongst many others. The magazine had changed the landscape…

The complete article is here. Thanks to John DeNardo at SF Signal for the tip.

We’ve discussed Andrew Liptak’s other articles at Kirkus, including:

[…] the complete article here. We last reported on Liptak when he looked at Astounding Science Fiction in […]