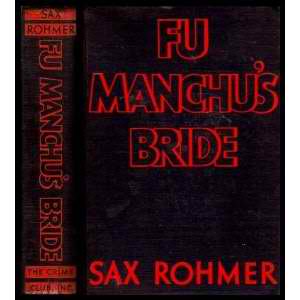 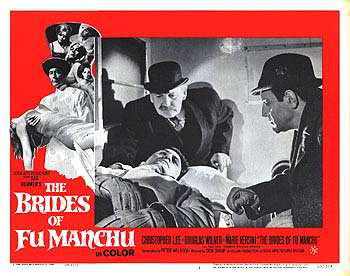 Sax Rohmer’s The Bride of Fu Manchu was originally serialized in Collier’s from May 6 to July 8, 1933 under the variant title, Fu Manchu’s Bride. It was published in book form later that year by Cassell in the UK and Doubleday in the US. The US edition retained the original magazine title until the 1960s when the UK book title was adopted for the paperback edition published by Pyramid Books.

Our narrator and hero, botanist Alan Sterling has found himself a Companion of the Si-Fan along with numerous other scientific geniuses conscripted into their service after falling victim to the catalepsy-inducing drug that leads the outside world to believe them dead. Fah lo Suee, the daughter of Fu Manchu, has conspired to prevent Sterling from being subjected to her father’s mind control drug in order to use him as a pawn to remove Fleurette, raised since childhood to bear Fu Manchu a son, from the household.

Attempting to escape, Sterling stumbles upon Fu Manchu in an opium trance. He considers murdering him to avenge Dr. Petrie’s death, but finds he is unable to lift a hand against him for some unknown reason. Retracing his steps, Sterling works to find an escape route through the elaborate cave system that leads from Mahdi Bey’s estate down to the beach at Ste. Claire. Rohmer builds suspense well as Sterling’s path through the dark is made more dramatic as he becomes aware someone is stalking him. Both Sterling and the reader are startled to learn the pursuer is none other than Nayland Smith.

Sterling brings Smith up to speed about what he has discovered in Mahdi Bey’s estate and tells him for the first time about Fleurette. Smith informs him that he had Petrie’s coffin exhumed and discovered the body inside was not Petrie’s, but rather that of the dacoit that Sterling shot and killed when Fah lo Suee broke into Petrie’s villa in search of the plague antidote. Smith explains he believes Fah lo Suee managed to inject Petrie with the catalepsy-inducing drug when she visited him at the hospital posing as his wife. Fu Manchu must have stolen Petrie’s “corpse” from the mortuary and replaced it with the body of his dead servant. The hope remains that Petrie is alive and may yet be saved from serving Fu Manchu as a Companion of the Si-Fan. 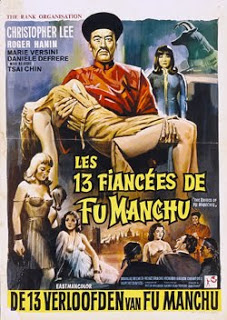 Smith explains that under the guise of Mahdi Bey, Fu Manchu has used the scientific geniuses at his Riviera estate to augment and crossbreed several strains of plague. Smith believes he intends to blackmail the governments of the world into paying for an antidote. Rohmer’s use of biological warfare predates Ian Fleming’s plot of On Her Majesty’s Secret Service by thirty years. Both books also begin with the hero meeting a beautiful and tragic female protagonist on the beach at the Riviera. Fleming credited Rohmer as a general influence, but On Her Majesty’s Secret Service and Dr. No are the two James Bond titles that most clearly show Rohmer’s Fu Manchu series as a model.

Smith details his daring infiltration of Mahdi Bey’s estate. Like Sterling, he came upon Fu Manchu in his drugged state, but found himself unable to resist his towering psychic powers. Smith had a more perilous path to finding the escape route through the underground tunnel network. Just then, Sterling’s wrist watch emits a signal. He explains he is being recalled. Smith urges him to return and try to locate Petrie. He hurries back inside the cave system and is surprised to learn it was Fleuerette who called him.

Sterling is startled to learn that Fleurette is also infatuated with him and jealously believes Sterling is one of Fah lo Suee’s lovers. He assures her of his love for her and asks her to help him find Petrie. Fleurette takes him to Petrie’s cell and helps him to revive the doctor. Petrie is shocked upon first glimpsing Fleurette’s face but does not explain why. He writes the perfected formula to the antidote and passes it to Sterling. While Alan tries to convince Fleurette to leave with him and Petrie, she tells him his only chance is to escape on his own for she can never leave Mahdi Bey’s household. An alarm sounds and the section doors seal off Sterling and Fleurette from escape. Fleurette is terrified that Sterling will be discovered in her apartment. Alan is left wondering why visitations are forbidden. 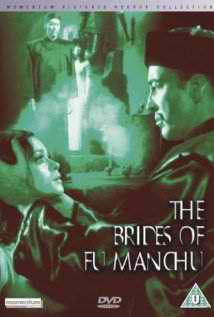 The two lovers are brought before Fu Manchu. Sterling is shocked to find a subservient Fah lo Suee on our knees before her father with her head hung low in shame. Fu Manchu explains to Sterling he has learned of his daughter’s plot to prevent a male heir from supplanting her and of Sterling’s intended role. He has also learned that Sterling and Fleurette are in love with one another. Fu Manchu warns him that if he has taken Fleurette’s virginity, the work of eighteen years will be undone. The Devil Doctor also explains that his intent with his biological plagues is to decimate the population of the West to allow the East to more easily rule the world. As Sterling is taken from the room, he sees Fah lo Suee suspended from the ceiling by her wrists as her father brandishes a whip.

Sterling realizes his love for Fleurette has cost him his life, Petrie’s life, and the chance for the antidote ever reaching the outside world. He is left to die in a room filled with genetically engineered giant plague-carrying insects. Sterling manages to escape and is rescued by Nayland Smith who is leading a raid on Mahdi Bey’s estate. Regrettably, the raid was detected and by the time they reach the living quarters, they discover the estate has been abandoned with no trace remaining of Fu Manchu, Petrie, Fleurette, or any of the scientific geniuses who make up his willing slaves. Smith clings to hope they may yet overtake the villains when they try to escape on the Riviera. In the meantime, he is overjoyed to learn Petrie is alive and that the antidote to the deadly plague is in their hands. Next week, we look at the conclusion of The Bride of Fu Manchu.

I believe this was best Rohmer Fu Manchu. I can really see the influence he had on Ian Fleming in this novel.