Ed Greenwood, of Forgotten Realms fame, just announced a slew of new worlds he’s created, all under the banner of Onder Librum. These are all shared world initiatives, meaning that creatives can come and create their own stories in the setting.  These worlds offer a variety of settings for readers, including sword and sorcery, space opera, hard SF, gothic romances… something for everyone.

It’s freaking cool, and at a scale that I’m not sure has ever been done before.  As soon as Ed told me about these new worlds, I jumped in enthusiastically and without looking (still falling off that cliff, and still haven’t hit a cactus). I signed up with a tight deadline for book set in Hellmaw, a dark urban fantasy shared world.  With daemons. It’s pretty fun (the second book in the series, Dragon Dreams by Chris Jackson, just came out).

I was a bit concerned about writing in a shared world. Questions bounced around my head like pop rocks in my mouth. Will I feel stifled? Will I understand the lore well enough? Will there be enough coffee????

So, with these concerns in mind, here’s what writing in a shared world helped me learn about my writing.

This was a huge revelation for me, even though I already knew it (because blowing star systems up = lolz). My readers know how much I enjoy blowing stuff up. But, in a shared world, where my footprint couldn’t be too big or necessarily noticeable by the “regulars” in the world or other creatives’ stories, I had to keep the blowing up to a minimum.  A very minimal minimum.

I Also Enjoy Killing People Too Much 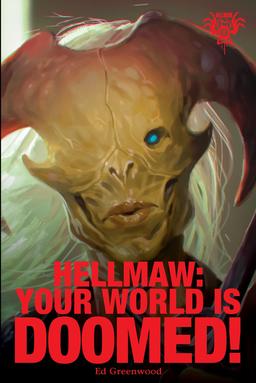 This is one of those things that I imagine I’ll report to a therapist and/or police officer someday. I love the gut punch of a good (aka not a Firefly-Walsh) death.  I’ve buried people alive, tortured them to death, had them die smothered by piles of bodies (maybe I should speak to that therapist sooner rather than later). BUT, again, small footprint. A sudden slew of dying people would draw too much attention, so I had to curb my killing instincts.

My main character is a daemon, by the name of Jaeda. She’s weird and insane, so I couldn’t write the whole book from her point of view as originally planned. I really couldn’t. So I surrounded her with a team of friends/enemies/and mostly in-betweeners who helped generate a lot of that tension that couldn’t be created by explosions.

I mean, the personal stakes are always present in any book, but this time, I leaned on them more heavily than ever before. With little time to write this book (less than three months from contract to due date), I kept the stakes very personal, mostly so my story wouldn’t need much editorial vetting to ensure it fit into the world. I kept to a small part of the world (one neighborhood), a few people, and one arching evil plan.

The Scope is Big

I still kept the story scope big by seeding lots of mysteries. I have six books in this story and lots of short stories, so I seeded stuff that will hopefully keep people buying the next book. Combine that with strong characters and some very personal (and sometimes silly) stakes, and I’m hoping for a solid and fun six-book arch.

I Became a Better Writer for It

It was a cray wild ride, with quick writing and lots of coffee, but by being handed a world and having to fit a story and characters into its pre-existing rules, I had to become better at my craft. I couldn’t just make the world do what I needed it to do to achieve my preferred ending. I couldn’t just destroy whatever I wanted to for convenience’s sake, and I had to think long-term, both for my characters and for the shared world.

Usually, in a book, the writer starts with a whole bag of gems. You have setting, plot, characters, lore (worlds are big in SFF!), theme, etc. You polish some more than others, and it’s okay because overall, the bag (and book) are shiny in the end. But in this book, I was handed a few precious gems to polish, mostly character (with some pre-defined abilities and traits to fit the world and overall story arc), and a constricted plot (my plot couldn’t ripple out of pre-defined barriers handed to me). Because I couldn’t throw that bag of bling in my readers’ faces, I had to polish those few stones really well to make the book pop. And I think it worked — I honestly believe this is the strongest book I’ve ever written.  More importantly, I had a ball writing it, and still love revisiting it.

Ed has created these new worlds to share them with creatives and friends. Check them out at OnderLibrum.com, and keep an eye out for all the various upcoming offerings, including my book: Eye of Glass!

Marie Bilodeau is an author, storyteller, and coffee lover. She still doesn’t have an answer of whether or not there is enough coffee, and lives in terror of running out.  More at www.mariebilodeau.com.