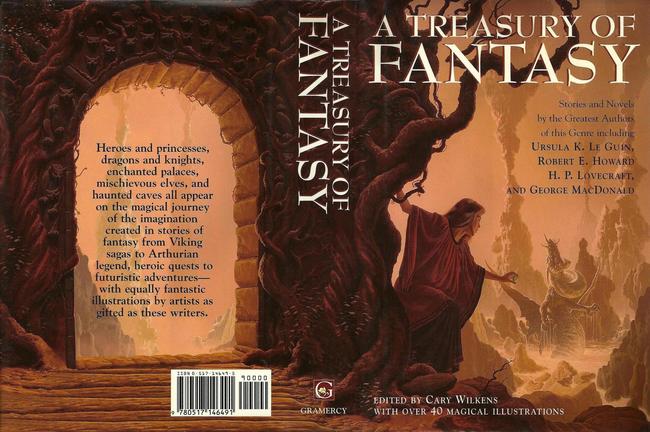 In the mid-90s, Gramercy Books had some success with a line of titles focusing on the supernatural and the occult, including The Book of the Dead, The Witchcraft Delusion, and A Treasury of Witchcraft (a collection of spells from ancient sources, which today has accumulated some hilarious Amazon reviews from folks reporting on their various effectiveness.) All of these were (at least nominally) non-fiction, but in early 1995 they added to their line up A Gothic Treasury of the Supernatural, a thick collection of half a dozen classic horror novels repackaged in an attractive hardcover.

The latter must have been successful enough for Gramercy to dabble in fiction anthologies at least one more time, since later in 1995 they repacked a 1981 Crown anthology by Cary Wilkins, A Treasury of Fantasy, with a brand new wraparound Romas cover (looking very much like Michael Whelan). Except for a rather embarrassing typo on the cover (they misspelled the editor’s name as “Wilkens”), this is the preferred edition of a thick omnibus collection of three novels and eight short stories by William Morris, George MacDonald, Lord Dunsany, H.P. Lovecraft, Robert E. Howard, Ursula K. Le Guin, and others. 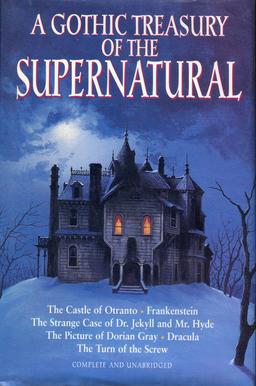 A Treasury of Fantasy spans over 400 years, starting with an excerpt from The Volsunga Saga, “The Story of Sigurd,” translated from the Icelandic by Eirikr Magnusson and William Morris. It also includes three complete novels:

Phantasies by George MacDonald
The Wood Beyond the World by William Morris
The King of Elfland’s Daughter by Lord Dunsany  (replaced with The Master Key by L. Frank Baum in the trade paperback)

The short stories include one of H. P. Lovecraft’s most famous Dream Cycle tales, a Kull novelette by Robert E. Howard, and an Earthsea story by Ursula K. Le Guin.

Here’s the jacket copy for the 1995 Gramercy edition:

Adventurous journeys in the world or the imagination

Beyond time, beyond space, beyond the reality we know, is the unexplored realm of our imagination where dreams and desires, joys and sorrows, romance, heroism, creation exist as in no other world. This realm is known as fantasy — where all things are possible!

Spanning seven centuries of magical fantasy writing, the stories and novels in A Treasury of Fantasy are a wondrous journey where you will enter enchanted palaces and mystical forests, dare to step into dragon-haunted caves, and come face-to-face with gods and monsters and creatures of both good and evil. Beginning with the Icelandic sagas of the Vikings in “The Story of Sigard” and moving to the famous Arthurian leg’ end of “The Quest of the Holy Graal” and the timeless adventures of Sir Lancelot, Sir Galahad, and Sir Percivale, the authors and stories in this volume represent a golden treasury of fantasy writing. The incomparable George MacDonald is represented with his brilliant Phantasies, a richly imaginative story of a quest through Fairy Land. And there is William Morris, considered by many to be the father of modern fantasy. What collection would be complete with a storv by Robert E. Howard, creator of the legendary Conan series, or a work by H.P. Lovecraft. And one of today’s foremost fantasy and science fiction writers. Ursula K. LeGuin, is represented bv an early comic tale, “The Rule of Names.”

Enhancing the magic of the writing and the enchantment of the tales are the more than forty equally remarkable and imaginative illustrations by such noted artists as Aubrey Beardsley, H.J. Ford, Arthur Hughes, and others.

Sit back and open the pages to adventure, romance, danger, mystery. The unbounded worlds of fantasy offer a journey of the imagination — and that can last forever.

A Treasury of Fantasy: Heroic Adventures in Imaginary Lands was originally published in 1981 by Crown Books, with a cover by Russ Hoover, a foreword by Wilkins, and 40+ interior illustrations. It was reprinted in a revised trade paperback edition in 1984 by Chatham River Press. Here’s the trade paperback edition:

The trade paperback edition was “revised” by swapping out Lord Dunsany’s novel The King of Elfland’s Daughter with L. Frank Baum’s The Master Key, and adding this warning paragraph on the copyright page:

A Note to the Reader

The Master Key, a work first published in 1903, contains some racial and ethnic references that may be offensive to modern readers. Readers should be aware, however, that these do not reflect the attitudes of the publisher of this edition and that they merely reflect the language, and its usage, of the early twentieth century.

However, this edition did keep the interior illustrations, and re-used the Hoover cover. 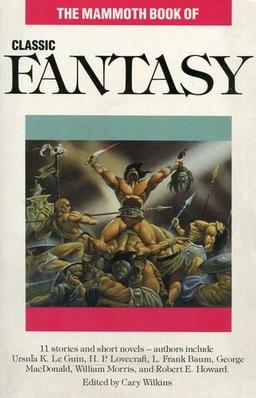 In May of 1987, A Treasury of Fantasy was repacked for the first time in the UK by Robinson Books as The Mammoth Book of Classic Fantasy. This is the only edition I don’t have, so I don’t know if the illustrations are included. But it’s an ugly cover anyway. If possible, you want one of the American editions.

Here’s the complete table of contents for the Crown and Gramercy editions:

A Treasury of Fantasy: Heroic Adventures in Imaginary Lands was published by Chatham River Press in 1984. It is 480 pages; the cover price is unknown. The cover is by Russ Hoover.

The book is currently out of print, and there is no digital edition. However, it’s readily available online — at the moment there are six copies in great shape available on eBay for under $6.

I have the revised trade paperback edition. It really is a first-rate collection.

Thanks Joe! This is the kind of collection I think would make a great gift for the fantasy fan in your life. It’s very inexpensive, and there are plenty of copies to choose from.