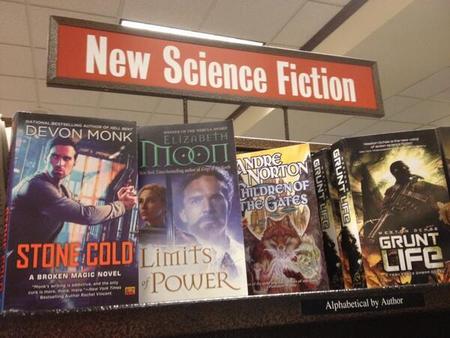 I’ve lived through enough boom-and-bust cycles in this industry to have read plenty of “science fiction is doomed’ prophecies over the decades. It usually happens at the start of a bust cycle, as the publishing industry contracts and readers see steep cutbacks. Funny enough, I almost never see the opposite  — astute readers pointing out the signs of a boom. Joel Cunningham at Barnes & Noble seems to be the exception. Have a look as he catalogs many of the signs of an ongoing explosion in SF & Fantasy publishing.

Hachette Book Group today announced an ambitious expansion of its sci-fi/fantasy imprint Orbit… Beginning in the fall of 2016, Orbit will grow its list by 50 percent, publishing approximately 90 titles a year—and they’re hiring new editors, marketers, and book packagers to do it.

Nothing proves belief in a market like investment, and across the board, publishers are investing in SF/F. Just this year, we’ve welcomed to the fold Saga Press, the dedicated genre imprint from Simon & Schuster that has developed a roster of launch titles unparalleled in the industry (the debut novel from award-winning short story author Ken Liu, anyone?).

Tor.com Publishing has emerged out of Tor Books, the largest player in the genre space, with a new business model that focuses on digital-first novellas, allowing for a faster-moving, more innovative strategy that brings you, the reader, the kinds of books you might never have been able to read before…

Why is this happening? It’s because of all of us. We readers are a passionate bunch, and we’ve voted with our time, attention, and most of all, our dollars, propelling big-money, book-first franchises like Game of Thrones and the Marvel and DC superhero universes to the forefront of the cultural conversation. There’s no stigma about being a genre reader these days, because genre touches everyone — just try getting through December without hearing about Star Wars on the regular (spoiler alert: it isn’t going to happen).

You say an eminent boom even while we’re right in the middle of one? Sure, could happen. Doesn’t look like it’s going to get down anytime soom. Up seems much more likeable.

But really, I don’t think Fantasy is ever going away. Stories from 80 years ago are just as great now as they have been back in the day. And to go even further, there are popular stories that are not just hundreds of years old, but thousands. They were created in other social contexts because doing 300 pages in small font for cheap entertainment wasn’t really an option until recently, but the kind of story predates any other form of literature and never went completely out of fashion.

> You say an eminent boom even while we’re right in the middle of one? Sure, could happen.

Well, not exactly. I’m saying that we’re in the middle of one, not that there’s another one coming.

> But really, I don’t think Fantasy is ever going away. Stories from 80 years ago are just
> as great now as they have been back in the day.

That’s certainly true, and it’s easy to argue that fantasy doesn’t date as quickly as science fiction. But fantasy certainly falls out of style — just ask fans of E.R. Eddison’s The Worm Ouroboros and A. Merritt.