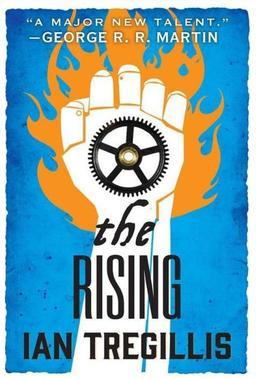 Ian Tregillis is the author of the Milkweed alternate history trilogy for Tor (Bitter Seeds, The Coldest War, and Necessary Evil), and Something More Than Night, a murder mystery set in heaven. Emily Mah interviewed him for us in 2012.

His latest fantasy series is The Alchemy Wars trilogy, an epic tale of liberation and war. The first novel, The Mechanical, was released in March; Publishers Weekly called it “Superb alternate history filled with clockwork men and ethical questions on the nature of free will… rich characters and gripping story really make this tale soar,” and it was cited by Flavorwire as one of the 10 Best Sci-Fi and Fantasy Novels of 2015 (So Far). The second, The Rising, will be released early next month.

Jax, a rogue Clakker, has wreaked havoc upon the Clockmakers’ Guild by destroying the Grand Forge. Reborn in the flames, he must begin his life as a free Clakker, but liberation proves its own burden.

Berenice, formerly the legendary spymaster of New France, mastermind behind her nation’s attempts to undermine the Dutch Hegemony — has been banished from her homeland and captured by the Clockmakers Guild’s draconian secret police force.

Meanwhile, Captain Hugo Longchamp is faced with rallying the beleaguered and untested defenders of Marseilles-in-the-West for the inevitable onslaught from the Brasswork Throne and its army of mechanical soldiers.

Ian is an extremely gifted writer. I’m really looking forward to this one. I have to wait to read his books until I have a substantial amount of time in front of me, because I usually can’t stop reading once I begin…

Thanks for the endorsement, Howard. Have you read his Milkweed Triptych?

Do you remember stumbling into his reading at WFC a few years ago? He was wrapping up, just before James Enge. He was reading from BITTER SEEDS, and the room was packed. That was the first time I noticed him… and noticed that he was obviously a writer to watch.

Yes, I did read that; as a matter of fact, I power read the last two because I couldn’t stand not knowing what happened next. Blew an entire writing day. His work is dangerous for me that way as few modern authors are. I fall between the words and just see the story, the way I used to be able to do.

I have a vague recollection of that moment, but I’d completely forgotten it. I only got to know Ian at ConFusion a few years back when a group of writers and reviewers dragged us into a photo because they thought we looked like we could be brothers. He turned out to be a really cool guy, and I then discovered his writing was brilliant.