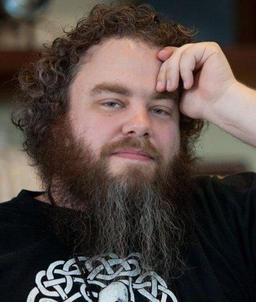 As we reported in July, several major Hollywood studios — including Warner Bros., MGM and Lionsgate — were in a pitched bidding war for the rights to Patrick Rothfuss’ bestselling fantasy series The Kingkiller Chronicle. Now The Hollywood Reporter, and Rothufuss’ blog, are ‎reporting that Lionsgate‬ has won the rights to develop the series for film, TV, and video game platforms.

Lionsgate has closed a complex multi-platform rights deal picking up The Kingkiller Chronicle, the best-selling fantasy book series by Patrick Rothfuss. The deal sets up the simultaneous development of movies, television series and video games with the goal to adapt the many stories across the mediums at the same time.

It also caps off interest and dealmaking that has gone on since mid-July, when Rothfuss met with studios such as Warner Bros., MGM and Lionsgate, among others, at Comic-Con.

Robert Lawrence, whose credits include 1990s classic Clueless as well as the Mark Wahlberg vehicle Rock Star and the drama The Last Castle, will produce. Lawrence was an early chaser of the Kingkiller series and stayed on the series even when it was temporarily set up at Fox Television.

Terms were not disclosed. Read the report at The Hollywood Reporter here, and at Rothfuss’ blog here.

His description at his blog of the entire negotiation process is well worth reading. I would’ve loved to be a fly on the wall at his meeting with big studio executives who wanted to throw money at him while he raved for 20 minutes about how his books were unfilmable.

I haven’t read any of Mr. Rothfuss’ books – I’m sure they’re excellent. I do wonder, though, about the effect on writing yet unborn when authors know that what they’re doing is primarily making something that will be the foundation for a “complex multi-platform rights deal.”

> when authors know that what they’re doing is primarily making something that
> will be the foundation for a “complex multi-platform rights deal.”

I suppose every writer dreams of a big film deal. But only a tiny fraction of the fantasy novels published every year are successfully made into films — and only a fraction of those get the kind of attention and production muscle of this deal.

Will this deal impact writers’ dreams? Maybe. Will it change the number of books becoming multi-media properties? I doubt it.

Compared to ASOIAF, or Shanara, they would be a breeze.

Though you would probably have the same problem that Martin has…Film/TV would catch up and pass the published materials very quickly.

Is it possible this will hurry the next (supposedly final) book in the (supposedly) trilogy? I hope so, because I’m one of those who wait until all the books are in hand before I start reading.

That didn’t work out too well with Wheel of Time, though, so maybe I should just go ahead and read the first one of this series now.

I know what you mean R.K. Robinson. I’ve also bought all of Rothfuss’s books, including the most recent novella in hardcover, but I’ve been waiting for him to get the third book published (and I’ve been too busy to start these books since I have other books I’m reading now). This is a strategy that maybe benefits the author since I’ve already bought everything that he’s put out in print (except anthologies) without even knowing whether I’ll like them.

Rothfuss gets special consideration in this regard because he’s a local boy. I happen to live in the same town as him. For other writers, I read the first book before I decide to commit to the others.