Over 40 years ago, Chicagoland brothers Phil and Bob Zagone realized that nothing ruined the chances of picking up a date on Halloween with a fantastic costume, faster than the sweaty mess you became under a rubber mask.

That — and there was no way to consume adult beverages while wearing one.

Committed to solving this age-old dilemma the brothers started working on several solutions which they eventually proposed to the Godfather of Halloween himself, Don Post of Don Post Studios in California.

Unfortunately (or rather fortunately), Mr. Post was too busy to consider their ideas, but advised the Zogones that if they were so keen to improve the mask industry, they were welcome to start their own company and have at it.

Which was precisely what Phil and Bob did in 1974, right here in their hometown of Chicago.

Black Gate photog Chris Z and I were thrilled to be invited on a private tour of Zagone Studios led by none other than second generation mask maker Tony Zagone himself.

Tony, along with two his brothers Phil Jr. and Rich, are carrying on the tradition of creating high quality, functional, made-in-America masks for Hollywood, the professional haunt industry, the party industry and the enthusiast collector.

The labor-intensive artistic process begins entirely in clay, where a world-renowned master sculptor creates and carves each design entirely by hand. We noticed Tony was very careful not to name him, only saying Papa Zagone had lured the artist from Hollywood to Chicago many years back, then convinced him to stay. 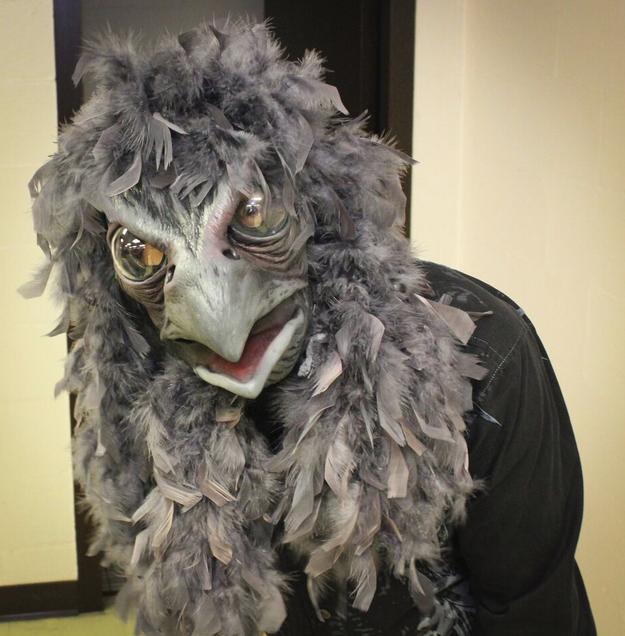 It didn’t take long to convince us Tony wasn’t kidding when he said their design process involved no technology at all – no CAD, no automated assembly line, nothing… seriously. What we did see was approximately 15 tons of dry plaster and several cavernous warehouse rooms that resembled an Alien egg farm.

You see, after the master sculptor has finished his latest creation, plaster is hand-poured over the clay creating one mold – which sounds entirely old school, and it is. But the resulting detail is incredible to behold as are the rows upon rows of plaster molds.

The Zagones did indeed solve the problem of drowning in your own juices under a mask of non-breathable rubber, by working with several different vendors until they landed on the perfect, light-weight custom compound of medical-grade latex. As latex is water-based and plaster is highly porous, coating a mold to create one mask results in the plaster leeching the water out of the latex into itself, thereby setting the compound. 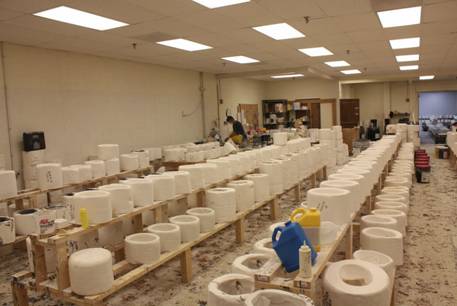 This leaves the molds very damp and extremely heavy. They then have to be moved into a drying chamber before the process can begin again.

Did I mention this is all done by hand…?

Even more amazing, at least to us, is that the molds are one piece. So rather than removing each mask easily by separating a two-piece mold (thereby creating an unsightly seem somewhere in the mask), the finished masks have to be gently finessed out of the single mold cavity without damaging the paper thin latex.

The result is a piece that behaves more like makeup than a mask.

Zagone’s double secret surgical latex compound is temperamental to work with, not to mention expensive, but it allows the finished mask to conform to the face and literally replace makeup to a large extent. This allows the wearer’s emotions to come through, but ultimately makes for happy actors (they don’t sweat and they can move their mouths to drink) — which is why Hollywood and the professional haunt industry can’t get enough of the Zagone brothers’ creations.

Feedback from customers drove more innovation such as a compound modification that allowed fabric to be incorporated into the designs. “The sock” design is comprised of a breathable, cotton, elongated stocking cap, with the latex mask on the front that not only weighs next to nothing, but allows the actor’s body heat to escape from the top and back of his head. A modified “sock” design incorporated a movable jaw concept which allows the actor to fully manipulate a “jaw mask” resulting in an effect that is mind-blowingly realistic (think snarling wolf jaw).

And yet, every mask Zagone produces is trimmed by hand with scissors and painted by hand, by a stable of artists; from the custom pieces done for TV shows like Bones and the film The Town, to the 5000-piece batches found in nationwide Halloween stores.

Like all great artisans, the Zagone’s take enormous pride in the craftsmanship that goes into every design but also have an equal amount of fun. Tony modeled many of the creations for us during the tour, immediately morphing into the appropriate character with each one; from wolf, to ogre, to the raven from hell. The whole event felt less like a tour and more like peek into the world of movie magic-makers.

So as a special effects fan, I couldn’t say yes fast enough when I was invited to try on one of the custom masks and pose for a Zagone Facebook photo. But as a collector, I was beyond thrilled when Tony said I could keep it to display in the Black Gate office.

It will be displayed alright. And proudly.

But not before I use it to scare the snot out of Aaron (oh-help-I-have-writer’s-block) Star which is precisely what he gets for lurking in the downstairs corridors after dark.

Are you a collector of fine, movie-quality masks (and aren’t we all)? Do you have your own Zagone design? Tell us about it by posting a comment or dropping a line to sue@blackgate.com.

And a most sincere “thank you” to Tony Zagone and Franco Pacini for their time and hospitality.

Man, this is about the coolest thing I’ve read here on Black Gate! Thanks for the report, Sue. You could make a really cool low budget movie or short with these masks.

NOLAbert, Thank you for completely making my day (and Zagone’s day as well I imagine). Should you ever find yourself in Chicago you are always welcome in the subterranean offices of Goth Chick News. Just mind the stairs and ignore the sign saying “Beware of the Leopard.”

Thanks for the invite. I live just one state away and most recently visited Chicago for the Viking exhibit at the Field Museum. I think I might have to get one of Zagone’s masks for Halloween this year. I think you should show us your custom Zagone mask in full get-up. Again, thanks for the awesome report!