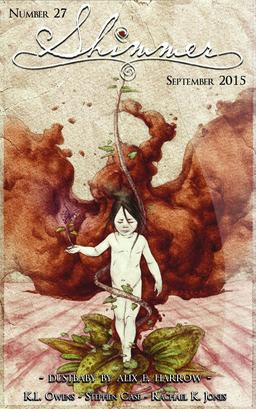 Shimmer #27, cover-dated September 2015, offers four new stories. Two are currently available on the website; the last two will be available later this month.

“Dustbaby,” by Alix E. Harrow
There were signs. There are always signs, when the world ends.

“A July Story,” by K.L. Owens
Iron red, linseed-cured, and caked in salt, in a place where the mercury never crept much above fifty Fahrenheit, the two-room house chose to keep its back to the sea. A wise choice, given the facing of the windows and the predilections of the wind.

“Black Planet,” by Stephen Case (available October 6)
Em did not dream the world. When the lights went out and the absence of her brother in the room across the hall became palpable, it was simply there, hanging in the space above her bed. She would stare at its invisible form, spinning silent and unseen, until she slept.

“The Law of the Conservation of Hair,” by Rachael K. Jones (available October 20)
That it has long been our joke that our hair lengths are inversely proportional, and cannot exceed the same cumulative mass it possessed on the day we met.

A new story is released on the magazine’s website every other Tuesday; or you can buy the complete issue in a variety of formats. The digital version also includes some nonfiction content (interviews and an editorial).

Shimmer is edited by E. Catherine Tobler and published by Beth Wodzinski. Digital editions are just $2.99 in a variety of formats, and 6-issue (one year) subscriptions are only $15. Order directly from the magazine’s subscription page.

We last covered Shimmer with Issue #26.