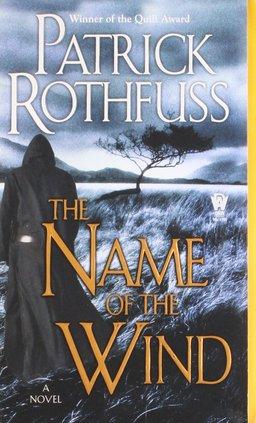 The Hollywood Reporter is reporting that several major Hollywood studios are in a high-priced bidding war for Patrick Rothfuss’s debut fantasy The Name of the Wind. Perhaps most interesting, the publication notes that, while the book has been around for eight years, the recent frenzy was likely triggered by the upcoming third novel, The Doors of Stone, which presumably provides the series with adequate franchise potential for studios looking to replicate the runaway success of Game of Thrones.

Warner Bros., MGM and Lionsgate are among a group of studios locked in a heated bidding war for Patrick Rothfuss’ mega-best-selling fantasy novel The Name of the Wind, book one in The Kingkiller Chronicle series.

Nearly every studio — also including Fox and Universal — is interested in the book, and the pool of suitors is expected to expand. The Name of the Wind centers on Kvothe, a magically gifted young man who grows to be the most notorious wizard his world has ever seen. But unlike most literary bidding wars, The Name of the Wind will see top brass from each studio descend on Comic-Con in San Diego this week to court Rothfuss…

Like George R. R. Martin’s Game of Thrones, another fantasy series of books that sat idle for years before generating Hollywood interest, The Name of the Wind has been around for nearly a decade. The book was published by DAW in March 2007 and spawned a second book, The Wise Man’s Fear, in 2011. A third book, tentatively titled The Doors of Stone, is expected in 2016, and likely sparked the renewed interest in The Kingkiller Chronicle. The fact that the series is seen as having enormous franchise potential [has] stoked the frenzy.

Rothfuss previously optioned the series to New Regency Prods, who were developing it for 20th Century Fox Television, but the option recently lapsed and the rights reverted to the author. Rothfuss confirmed the news on his Facebook page (in a post that’s generated over 1,000 comments in 9 hours), saying “So. Yeah. Here’s some news.”

Couldn’t happen to a nicer guy, either. (I got to be on a panel with Pat once, and if I talk about it too much it’s because it was one of the most fun 90 minutes I’ve ever spent in public.) Between this and American Gods, I may have to actually get cable.

The first time I ever met Patrick, it was on a panel at Wiscon. He was the moderator, and he was one of the best moderators I have ever seen. Thoughtful, extremely articulate, and profoundly respectful of others. He should give classes in how to share a podium and speak in public.

I only know him from Acquisitions Inc. (“What ho!”) but good for him.

One of these days I hope that book sifts to the top of my pile.

I wish instead of all this he’d just write the next novel.

I’m not sure how much attention this is demanding from Rothfuss, and just how much it’s impacting his writing. Who knows? Maybe all the attention is exactly what he needs to get inspired!

I wish instead of all this he’d just write the next novel.

In one of the Acquisitions Inc. games, Rothfuss’s character received a benny. When the DM explained it to him, he said, “So I can use this to do anything?”

Scott Kurtz said, “You could use it to write the book.”

The crowd erupted in laughter, and Rothfuss got up to shake Kurtz’s hand.

I confess that I don’t get the interest in Name of the Wind. I reads to me like being cornered by “that guy” at gaming convention who insists on telling you every detail of the back story to his 256th level uber character.

One of the truths about publishing is that, to be a breakout success, you really only need to appeal to a small fraction of readers. In any room, ask around to see how many have enjoyed reading LORD OF THE RINGS or GAME OF THRONES. I’ll be surprised if it’s as much as 30%. And those are two of the most successful fantasies ever written.

There will always be more people who are disinterested in, or actively dislike, a book than actual fans. Always.

A book that appeals to 50% of its potential audience would be the most successful release in publishing history.