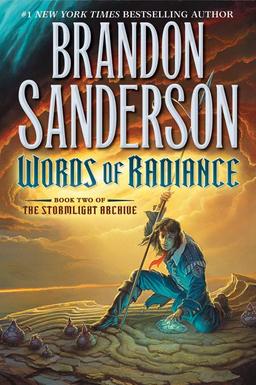 The winners of the 2015 Gemmell Awards have been announced by the David Gemmell Legend Award administrators (the DGLA). May we have the envelope please!

Sam Green for the UK cover of Words of Radiance, Brandon Sanderson (Gollancz)

The David Gemmell Legend Award is a fan-voted award administered by the DGLA. The Legend Award for Best Fantasy Novel was first granted in 2009, and has now been awarded seven times.

The previous six winners were:

See all the 2015 nominees here, and last year’s winners here.

The Legend Award is named for David Gemmell’s first novel. The trophy is a scale model of Snaga, the axe wielded by Gemmell’s famous hero Druss. It is created each year by Simon Fearnhamm of Raven Armoury. The awards presentation took place on Saturday August 8th, at Nine Worlds Geekfest.