When we talk about great dates in literary history, 414 BCE doesn’t really make the cut. But if you’re a sci-fi or fantasy reader (and if you’re reading this page, you probably are) it should probably be one of the foremost you know of. Why?

Because prior to the fifth century BCE, we had never seen a fantasy setting in Western literature. People may have doubted whether Humbaba really existed or if Odysseus ever visited the Island of the Lotus Eaters. But the idea of pure poetic invention hadn’t come to full realization. This is partly because in the Ancient World, the idea of a strict delineation between fact and fiction was a bit strange. Myths didn’t have a strict canonical version, and people were comfortable with a lot of variations on the truth flying around. It wasn’t relativism, not as we understand it, it was… well, a sense that the truth should never get in the way of a good story, or that whether or not something was true wasn’t necessarily tied to whether all the facts happened just that way.

So you could play with storytelling, and storytellers played a lot. But Aristophanes’ The Birds is the first time that we are aware of that we see a fully fleshed out, completely invented country.

It is even peopled by talking animals. 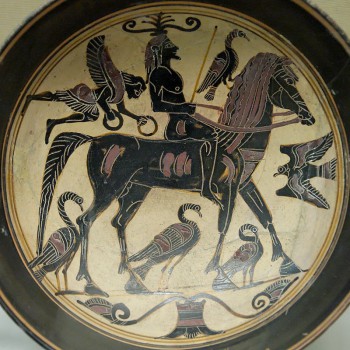 That imaginary country, the first of its kind, was called Nephelokokkugia, or Cloudcuckooland. This country was built the birds, who wanted to set up a state far from human interference and hunting. In this cloud city, they would be able to rule over men from above (as the Olympian gods do) and, one better, they would be able to block the smell of sacrifices and the prayers that travel from men to the gods. The plan is so successful that the leader of Cloudcuckooland engineers the overthrow of the Olympians and becomes sovereign of the universe.

It’s a comic impossibility, of course, so much so that “Cloudcuckooland” has become idiomatic in several languages for an impossible dream, a fantasy. But that isn’t the point: Aristophanes wasn’t trying to design a possible utopia. Instead, he was constructing the perfect escape, the dream of a life away from idiotic Athenian (and, really, human) politics, away from the machinations of the gods, in a place of power where those wrongs could be righted.

And that right there is what makes this play so important. Yes, it is our first fantasy world. But it is also the tone of that fantasy world that is so important. It is why fantasy and sci-fi are so important to us. It is intellectual escapism, a desire to retreat to more beautiful, more exciting, more elegant worlds. It is idealism, the belief that we can at least dream a world in which we can fix what is wrong with this one.

And it is above all else the invention of the thought experiment. A friend of mine recently suggested that Aristophanes and Plato invented Science Fiction. I got him on Aristophanes but didn’t get why he included Plato, but that was what he meant. (I think, Mike: jump into the comments section here if I got you wrong!) The two are contemporaries: Aristophanes’ Clouds makes fun of Socrates and his brand of free-wandering thought, but they’re doing something very important and very similar here. They’re creating complete abstractions, playgrounds of the mind… and then they’re playing in them.

If speculative fiction has any one root draw, it’s just that – its speculation. The “What If” game is endlessly fascinating for those of us who love it. What if we could clone dinosaurs from DNA found in mosquitos? What if synthetic blood let vampires come out of the coffin and walk among us in everyday life? What if parallel universes were real and this blog post were being written by an alternate me with a better ability to catch her own typos?

So go on back, and take a look at where it all started. In Cloudcuckooland. With dick jokes.

Perhaps your friend is thinking of Plato’s Republic as an exercise in worldbuilding, a fine sf tradition, as proto-sf often includes utopias like Thomas More’s eponymic work.

Me, I would join you with Aristophanes and enjoy the laughs, though maybe with the frogs – “Brekk-kek-kek-kek, ko-ax, ko-ak, brekk-kek-ko-ax!”