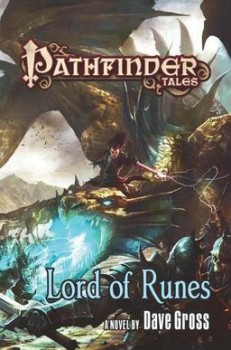 You know, of course, we love us some Pathfinder (the role playing game, not the Viking-American Indian movie) here at Black Gate. And I don’t just say that because Managing Editor Howard Andrew Jones has written two novels (with a third coming in October) for their excellent fiction line, Pathfinder Tales.

There have been 30 novels in the series so far. The first (Prince of Wolves), the most recent (The Lord of Runes) and three in between (Master of Devils, Queen of Thorns, King of Chaos) have come from the prolific pen of Dave Gross.

With his tales of half-elven Pathfinder Varian Jeggare and his devil-blooded bodyguard Radovan, Gross has successfully blended the fantasy and mystery genres. Dave has taken some time out of his busy schedule to share some thoughts. Of course, I love the ‘Holmes and Watson’ references.

You can find more info on the Pathfinder Tales line here, including free web fiction. And here’s a link to some Black Gate coverage of the line, including The Lord of Runes. Check out the fine fantasy writing that’s taking place in Pathfinder’s world of Golarion. Take it away, Dave…

As a writer, I hate throwing what Hollywood calls elevator pitches — you know, those snappy “X meets Y” descriptions of a screenplay. We do the same thing in publishing, often still referencing movies rather than books. “It’s Star Wars meets Sixteen Candles,” or “Ocean’s Eleven meets Ghostbusters,” or “Casablanca with orcs as the Nazis.”

As an editor, I love elevator pitches. They give me a quick idea of whether I might be interested in the story. Even as a reader I like them, as long as they’re like the good movie trailers, giving me a taste without giving away the whole story.

If, however, a movie or a book turns out to be exactly Star Wars meets Sixteen Candles and nothing more, it’s a let-down. While I’m all for mashups as an artform, I want something that starts from that collision of two different things and then moves to new territory.

When I pitched the first Radovan and the Count story to Paizo, I suggested (among several other pitches) something like, “Sherlock Holmes, only Watson is a bad-ass.” (I know the original Watson is a bad-ass, not the doddering fool he became in Hollywood until his and her recent redemptions.)

While “Holmes and Watson” was useful shorthand for communicating my idea to the editor, Radovan and the Count are not Holmes and Watson. For starters, Count Varian Jeggare isn’t as brilliant as Holmes, but he has wealth and half-elven longevity that give him exceptional knowledge and experience.

And Radovan is less like Watson and more like a hard-boiled detective — mostly a recent film noir binge had tainted my imagination. “Holmes and Marlowe,” while more accurate, was a bit too clever and would sail right past most readers. “Holmes and Watson” it remained.

After the first novella, I continued pitching like a screenwriter for the novels. I threw Prince of Wolves as “Indiana Jones meets Brotherhood of the Wolf.” Master of Devils was “Holmes & Watson versus every Kung Fu villain ever.” Queen of Thorns was “Aliens meets Lord of the Rings.”

As the boys developed through five novels and many stories, it became increasingly difficult to describe them simply as Holmes and Watson. There were other influences on them, not all of which I realized at the start. One of the earliest reviewers referred to Radovan and the Count as “the new Fafhrd and the Grey Mouser.”

I was flattered and a little ashamed because Leiber is a giant and I’m a Hobbit, but the “buddy sword-and-sorcery” paradigm fit. The one that really surprised me was the comparison to Ham and Monk from the Doc Savage stories, which I realized only years later. It seems so obvious now!

Few of us are always aware of our inspirations, I think. Unless you’re raised in an isolation tank, your imagination is an accumulation of thousands of influences. Even elements you think are original often turn out to be permutations of other works, whether novels, films, plays, or pop songs. The hope is that the new mixture will be—or will soon become—its own thing rather than just a cheap copy.

At writing panels I joke that it’s safer to steal little bits from a hundred sources than a big one from just one. If you pinch a single too-famous image or line, you can bump the reader out of your story.

Here’s my confession: I’ve been guilty of that crime.

In The Sundered Arms, a D&D novel I wrote under the house name T.H. Lain, I described a dog carrying a severed hand through a razed village — my homage to Yojimo. My wary editor, also a Kurosawa fan, reluctantly agreed that it was subtle enough to fly.

Far worse, I also had a character remark about an eviscerated carrion crawler, “And you thought they smelled bad on the outside.” There was no way anyone would read that and not think about a tauntaun. I’d gone too far.

When it comes to characters, you need to be careful even of small things like gestures, phrases, and props. When readers compared Radovan to Wolverine and Hellboy, I resolved never to let Radovan smoke a cigar again. You’ll find the one-and-only instance of that in Hell’s Pawns, the original novella. After that, Radovan favored pipes. And for the record, he’s never called anyone “bub” or shown a special affection for cats.

Likewise, if I put a deerstalker cap on Count Jeggare, it’d render him (and me) instantly ridiculous. I don’t want to copy Sherlock Holmes. What I wanted was to start with Arthur Conan Doyle’s general idea of a consulting detective. Beyond that, I don’t want to imitate the character of Sherlock Holmes or Fafhrd or Ham Brooks or Stephen Fry or my buddy Pierce or any other personality whose quirks inspired the amalgamation that became the Count.

For the most recent Radovan and the Count novels, I had no elevator pitch. That’s not to say I couldn’t come up with one after the fact; I just didn’t start from one. Keen readers will surely find traces of a hundred subconscious influences on the story, characters, and dialogue, but I can’t yet guess what they are. (Nope! That’s not true. I just thought of one while proofing this essay, but it’s pretty vague.) As far as I was aware while writing the novel, the major inspirations for Lord of Runes were the ones that came before it.

Maybe that’s the ideal: to allow yourself to be influenced by all the works of art that you love, but to do it unconsciously.

Dave Gross anchors the Pathfinder Tales series, which explores the world of the massively successful Pathfinder RPG. His resume also includes novels for that other well-known RPG, Dungeons and Dragons, and he’s edited several magazines, including Star Wars Insider and the venerable Dragon. You can check out his blog here.

I need to start pitching my Holmes stories like movies…

[…] Last week Bob invited me to contribute an essay based on the “Holmes & Watson” pitch that launched the Radovan & the Count novels. That led me to consider both the limitations of the “elevator pitch” and the perils of “pinching” ideas from famous books and movies. You can read it right here. […]

Dave Gross’s Pathfinder tales recently moved to the top of my “to read” list, and that’s based on the impressive quality of the four Pathfinder books I have read thus far by Howard Andrew Jones and Tim Pratt. Realizing that two authors might not be representative of a a whole book line, I resolved to delve into the contributions of other writers to see if they are as consistently good, and Gross is heralded as a “fan favorite.” So I’m glad for this interesting little introduction to books I plan soon to be reading!

Incidentally, I am chuffed to read here that Jones has a third book slated for release this year! I just finished his first Pathfinder book (I read them out of order), and was actually working on a review to post today, but I ran out of time and will try to post it next week. (I will also be reviewing Pratt’s books and, eventually, Gross’s.)

Nick – If you haven’t already checked out the free PF web stories (the link’s in the OP), click on over. You can get a feel for the different styles of the various authors. And there are at least a couple dozen short stories up there.