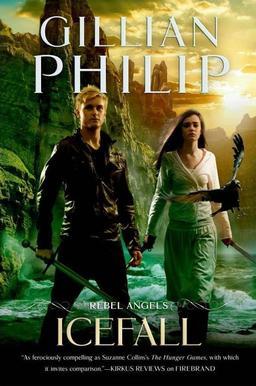 Two years ago we reported on the release of Gillian Philip’s Firebrand, the first novel in her popular Rebel Angels series. It was followed by Bloodstone (2013) and Wolfbane (2014).

Now Tor Books has released Icefall, the fourth and final book, which brings the tale to a climactic close. If (like me) you wait until all the books are available to binge on the series everyone is talking about, now’s your chance.

Death stalks Seth MacGregor’s clan in their otherworld exile. Kate NicNiven is close to ultimate victory, and she is determined that nothing will keep her from it. Not even the thing that took her soul: the horror that lurks in the sea caves. But Kate still needs Seth’s son Rory, and his power over the Veil. And she’ll go to any lengths to get him. Seth’s own soul is rotting from the wound inflicted by Kate, and survival for his loved ones seems all he can hope for. But might a mortal threat to his brother’s daughter force him to return to his own world to challenge Kate? And will Rory go with him? Because Rory suspects there’s a darkness trapped in the Veil, a darkness that wants to get out. But only one Sithe knows how near it is to getting its way: Seth’s bound lover, the witch Finn. Nobody gets forever. But some are willing to try…