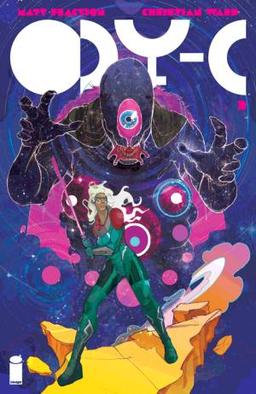 Odysseus’ encounter with the Cyclops is (and has consistently been for several thousand years) one of the best known episodes from the Odyssey. It’s exciting, it’s graphic, and it displays Odysseus’ most notable quality: his cunning. So I was eager to see what Ody-C would do with this episode when it reached that point. It did so fairly quickly, and issues 3 and 4 span the telling of this encounter for Odyssia and her crew.

The results were mixed. There are things I loved, and a few I really didn’t. But first, to touch on what Homer did first. Not because it’s the meter by which we should judge Ody-C but because I like some of the ways Matt Fraction is playing with the prototype here.

For those who don’t remember, Odysseus and his crew wash up on the shores of the island of the Cyclopes. They find a large, empty cave, and help themselves to cheese and milk while waiting for the inhabitant to return. When he does, he isn’t a human but the massive Cyclops Polyphemus. Polyphemus proceeds to eat many of the sailors, until Odysseus gets him drunk and gouges out the Cyclops’ eye with a massive pole. The men then tie themselves beneath Polyphemus’ sheep in order to escape the cave when the flocks are let out to graze.

In Ody-C, the fundamentals are all here but the differences are significant. Odyssia and her women arrive on the planet Kylos. They find a massive fortress, and rather than looking for sustenance, Odyssia orders a break of the citadel in the hopes of finding treasure.

What she finds instead is a slaughter. The Cyclops arrives, a cross between the Diana of Ephesus and a vagina dentata that would send Freud running for the nearest wastebasket. The requisite cannibalism follows.

And does it. The gore in issues 3 and 4 is intense, graphic, and profoundly effective. Granted, I am not a gore fan, but I have never had a comic turn my stomach before. Blood flows down hungry maws, guts fly, eyes burst, and in place of the long fire-hardened pole of wood, Odyssia and her girls climb out of the Cyclops’ pit with ladders assembled from the ribcages and spines that litter the floors. On climbing her own ladder, Odyssia gouges out the Cyclops’ eye with its tip.  They then run back to their ship and fly to the planet of Aeolus. 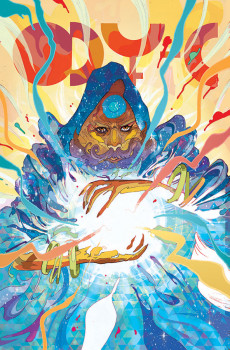 Fraction and Ward are doing something here I really enjoyed. In the Odyssey, this episode has a lot to do with defining “civilized”. The Cyclops doesn’t know what wine is, doesn’t know anything about bread, farming, or living in community. His cannibalism is part and parcel of being not-civilized, not-Hellene.

But in Ody-C  Fraction and Ward are playing with another boundary, that between the human and the machine. The Cyclops’ body, while organic, is described in mechanistic terms: “Under the necrotic hull of her flesh there hides meat, and soft wires of tendon…” and later her ribs are termed “slats.” It’s a blurring that works well in this world.

Unfortunately, that was the end of my enjoyment here. My primary complaint is in the characterization of Odyssia, who increasingly appears not as a wily character, or as a trickster, but as the kind of savage warrior that better typified Agamemnon or Ajax. She gets out of the Cyclops’ pits not by being clever, but by being willing to do anything to survive, including crafting a ladder out of her companion’s femurs. That’s not a fundamentally bad thing in a main character: it works for Mal Reynolds, who pulls a similar stunt in Serenity.

But it isn’t Odysseus. And again, that’s fine: I don’t need this character to just be “Odysseus as a girl”. But I don’t like who they’re making this Odyssia into. She is motivated by greed and ambition rather than curiosity. She has none of Odysseus’ warmth, none of his actual desire to get home.

This problem extends to the world building as a whole. This is a universe without any warmth to it. Again, that can work: the “Crapsack world” trope is a popular one, and it’s behind some of my favorite stories. But at this point, there is no warmth anywhere. Four issues in, and I feel no connection to any of these characters, no desire to get to know them any better, and no sense of them as people.

I wanted to care. I wanted to love this series. I thought I would, at the start. At this point, though, I’m another issue away from calling it quits.

I would like to see something closer to the original too. I am intrigued by the idea of a female protagonist. It would be interesting to see an Athena element in it. Getting the crew home was essential to the Odyssey. I would not like the deviation either. It would not make sense. Oh Brother Where Art Thou? deviated but kept true to the story.

Thanks for the review. Don’t smoke. 🙂