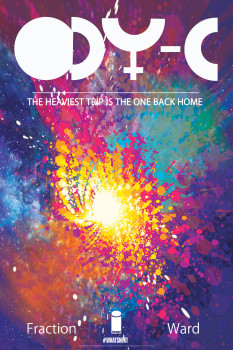 I love Classical literature. I have since the third grade, when I first picked up a copy of D’Aulaire’s Greek Mythology. That love drove my choices in schooling until fairly recently, and there was no work I enjoyed more than Homer’s Odyssey.

You may have noticed.

I also love comic books. I’m much more of a dabbler on that front, but I’m always looking for a new book to follow.

So when I heard that Image Comics was putting out Ody-C, a gender-bent Sci-Fi version of the Odyssey, I was excited. Actually, I think I squealed, screamed on Facebook, and immediately made plans to blog about the title here. This past weekend, I finally sat down and read through the premier issue.

And I still don’t know what I think. So while I will tag this a review, call it more a series of impressions and a place for discussion, while I wait for the next issue (which will be available December 24th).

Now, when I say I don’t know what I think, that doesn’t mean that I don’t like it. I think I do. In fact, I think I’m going to love it. But Ody-C is so deeply, intensely strange that it is taking me a long time to wrap my brain around it. Matt Fraction and Christian Ward have come up with a work that is thoroughly alien, shocking, and surreal.

That is fitting. The Odyssey itself is alien and shocking. This is in part because it takes place in a time so distant from our own, and in part because it is the story of a voyage through entirely novel territory. The difficulty the reader has with Homer’s text parallels its hero’s struggles. Moreover, Homer’s wordplay is part of the beauty of the work.

Fraction has preserved much of that feel in his script. The text is numbered, mirroring the line numbers in a Greek text. He has also played with word order and epithets in a way that is both Homeric and future-foreign:

The world is unexplained, characters are not identified except by their images and epithets. We are not given any explanation of how these ships are piloted (although it seems to be through some kind of mind link, shared among several pilots), where Ithicaa is, or who exactly Odyssia is. Our only guidepost through the text is the passing familiarity we have with the original source material – the Homer.

I love that. It’s frustrating and hard reading, but it pays.

The art is equally strange and fantastic. Image Comic bills Ody-C as psychedelic, and Fraction has described this as his Barbarella. It definitely shows. Colors are bright, bold, and sharply defined even while what they sketch is fantastic or impressionistic. The character’s costumes are martial, but look less like anything on a Greek vase and more like something out of a 1970 space opera. Meanwhile, the technology displayed is so different from anything we’ve ever seen before that the eye has difficulty interpreting it.

And again, that works. Fraction and Ward here have created a world that is as strange in its futurity as Homer is in his antiquity. The question that remains is whether this will continue to work or whether it will stand as a gimmick.

I mentioned above that Ody-C is the gender-swapped version of Homer, although that’s really just the beginning. As you may have noticed above, our hero’s name is Odyssia; her sister-Queens are Ene and Gamem. As we meet the queens, Troiia has fallen and Ene’s man Ele has been recovered. After the conquerors set sail for home, we see a conference of the gods that includes a Mother-Father Zeus and a bearded Athena.

So Gender isn’t merely switched here: it is bent, blurred, and rendered as strange and varried as everything else in this world. The ships are constructed as much around yonic imagery as Homer was obsessed with the phallic: instead of swords and plowing, piercing ships on the sea, we have massive rings piloted by captains sleeping in womb-spaces. Odyssia spends her time in bed not with a strapping young man, but with a Sebex, a female-bodied person who is not yet explained. Clearly gender is yet another category that Fraction and Ward are rendering alien to us here.

I’d like to close here by saying something definitive. But I can’t: not yet. The plot covers the first few incidents of Odysseus’s classical voyage home: the leaving and the battle with the Cicones. The first issue closes here, with many more to come.

With that in mind, I am reserving judgment. I can easily see Ody-C becoming a new classic, a true breakthrough in story-telling and in the art of science fiction. But there is also a very real danger here of strangeness for strangeness’s sake, of experimentation becoming gimmick. What I’ve seen here is exciting enough that I want to give them the benefit of the doubt.

Issue 2 of Ody-C is reviewed here.

If you would like to take a look at Ody-C, you can find an unpublished preview available at the artist’s website here.

[…] the conclusion of the first issue of Ody-C, I wasn’t certain of how I felt about the series. I had opinions, certainly, and I had […]