I’m filing this report from my Microtel suite in Mankato, Minnesota.

Even if you’ve never heard of this city of 39,000, maybe you’re one of the nearly 2 million people who have visited the notorious web site dedicated to it, which has been online for around twenty years (I often used the site for illustrative purposes in the research portion of my composition classes — for reasons that will be immediately apparent when you consider how cleverly it raises the issue of reliability of Internet sources). If you haven’t visited http://city-mankato.us, do so right now (or after you finish reading this).

There you’ll learn about Mankato’s hidden underwater city, the ancient pyramids, and the incredible geological feature here that defies the northern weather. Here’s the opening paragraph of the web site’s home page, just to give you a taste:

Mankato, Minnesota is truly a wonderland. Tucked into the Emerald Green Valley in Southern Minnesota, it is the hidden vacation Mecca of scores of knowing Midwesterners. Mankato has everything thanks to a freak of nature: the Sclare/Far Fissure. This fissure in the earth’s crust takes water seeping through the earth, heats it to well over 165 degrees, and sends it back up to the surface in steam pits and boil holes. The heat from these pits and holes heats the valley air to such an extent that the winter temperature in many Mankato neighborhoods has never dropped below a balmy 70 degrees!!!! Come enjoy our winters! Let’s “Make It Mankato”!!!

I spent the afternoon driving up here, which is why this blog is posting so late at night (in fact, the dateline says it’s the next day). I’m here not to visit LufsaHoma, the “original fictional ‘Castle Dracula’ from Bram Stoker’s novel,” nor to investigate the “great Stoddard/Milet expeditionary digs of 1907 and the mysterious Silver Disks.” Over the next couple days I’ll be a presenter at a Young Writers’ Conference, teaching tricks of the monster-story trade to fifth through ninth graders.

So, other than writing this post, how do I occupy these lonely hours in my hotel room?

I haven’t turned the TV on since I got here. No, I’ve been perusing eBay. Not buying stuff (okay, I did break down and purchase two vintage rubber snakes made in Japan still in their original bags — but they were a steal at only $4 with shipping for the pair!). I’m just seeing what’s out there, especially with regard to vintage toys. Educating myself, expanding my knowledge. Not. Buying. Stuff. (Emphasis added in case my wife is reading this post).

All of which is to set the stage for what I came across — pictured up there at right — and what my immediate reaction might reveal about the workings of the human brain. The items in question are 1970s Avon plastic dinosaur decanters filled with bubble bath. 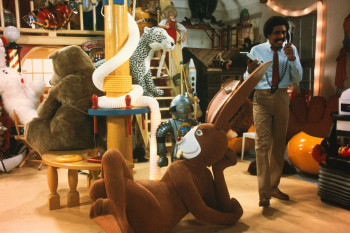 I’ve mentioned this phenomenon before: coming across something I had that I’d forgotten I had, and then nostalgically wanting it again. Now, I didn’t grow up in a toy store. My room wasn’t like that rich kid’s in the 1982 Richard Pryor film The Toy. Still, I seemed to have gone through quite a bit of stuff, most of which is probably now buried in a landfill in the Arizona desert.

If I were to ask you to recall your favorite toy when you were growing up, odds are a few special ones would quickly come to mind. And then there are the ones of which any trace of a memory is gone — until you happen to see them again. These Avon dinosaur bubble bath bottles are a great example. The last time I thought of those was probably shortly after the last time I emptied one, decades ago. If I hadn’t happened across a picture online, I may well have gone to my grave never recalling them. And yet the moment I saw that triceratops, it was as if I had held it in my bath-pruned fingers yesterday. The bodies were plastic but the heads were rubber — I mean, you can tell that by looking at the picture, but I can feel that sensation of unscrewing the stopper — I retain that sense memory! The pleasant associations (bath time and toy dinosaurs, there’s a powerful combination) that go into the chemical reaction in the brain that produces nostalgia: Bam!

It’s not that I had forgotten about Soaky Bubble Bath Bottles in general — indeed not! About a year ago, when my wife asked me to pick up some bubble bath for the kids, I marched enthusiastically to the bath aisle to look for some cool Star Wars or Marvel superhero bottles for them like the ones I fondly recalled. I mean, they’re coolness to the power of 2 — they’re filled with bubble bath, and then they become a toy that you can play with in the bath!

Imagine my shock and disappointment to discover there in Wal-Mart that they don’t make ‘em like that anymore. Just a regular bottle with a picture of Dora the Explorer or SpongeBob slapped onto the label. Lame!

Yet I had forgotten those dinosaur bottles. And as soon as I was reminded of them, I remembered that they were my favorite bubble baths — I was really into dinosaurs, and these were very cool sculpts, and I loved the texture and feel of them, and, c’mon, prehistoric monsters rising from the sudsy foam! 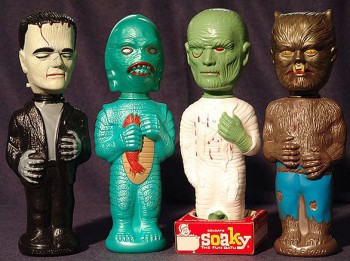 Still, before I spotted these tonight, it would seem as if that particular memory was just gone. To the contrary, it was obviously there all along, stored somewhere in a part of my memory that I might have never again accessed. And it got me to wondering why. Not why I’d forgotten them, but why they were still floating around in there in my head, concealed as if by layers of foamy suds just waiting to rear up out of the murky depths. Why didn’t my brain decide, at some point after about three decades had gone by, that these files hadn’t been used since before the days of the Atari 5200 and so probably weren’t relevant and could be wiped to free up space? I mean, I could use it. I nearly forgot the other day that I had a scheduled doctor’s appointment.

Regarding this hidden retention of seemingly irrelevant memories that might never be replayed, I guess I can see its analogue in evolutionary development. Presumably our brain is primed to use our vast data-storage space to file away every new detail (encrypted, as it were — in a pass-protected file so that it’s not always buzzing around uselessly in the forefront of our mind) in case we encounter that detail again in the future. We can tap that hitherto unutilized information to assess such important questions as…Was this edible? Did it make me sick? Is it safe? Will it help me procreate and pass on my genes? Will it get me clean? Will it bite me? Can I sell it on eBay?

And there’s got to be a mind-boggling amount of details in there. When you sit down to write a scene, you have to work at it — picturing what’s going to be there, where you’re going to situate your characters, whether there are any trees or lycanthropes nearby, and so on. But when you dream, your subconscious just spins it all out in three dimensions on the spot in real time. That never ceases to amaze me.

And that’s how a dinosaur bubble bath bottle got me to thinking about neuroscience in the fabled city of Mankato (where it is not, I assure you, a “balmy 70 degrees”).

Now I’ll wrap this up, and before I turn in for the night, perhaps I’ll take a shower (and kick myself for not packing any bubble bath).