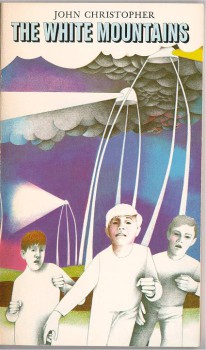 Long before YA fiction conquered the universe and millennia before the trilogy became the gold standard by which the world judges any given author, there lived Sam Youd, a British writer who worked under the pseudonym of John Christopher. Youd published The White Mountains in 1967, at a time when the United Kingdom was lurching away from the tight-laced, survivalist mode inherited from and necessitated by back-to-back world wars. Cue mods and rockers, Pink Floyd, the Swinging Sixties. Twiggy. Bowie. Cue a mind-set ready to dismiss the bleak past in favor of (in Christopher’s eye) an equally bleak future.

I first encountered The Tripods trilogy in the late seventies, and both my sister and I devoured the series more than once. In the first book, Will Parker, his loutish cousin Henry, and a whipsmart French lad, Beanpole, embark on a post-apocalyptic journey to the only haven they’ve ever heard of where humankind isn’t ruled by the fearsome Tripods, massive metal beings reminiscent of The War Of the Worlds. But in The White Mountains, the tripods have won: humanity has been enslaved through the use of “caps,” metal headgear installed without fail on a child’s fourteenth birthday. Will, Henry, and Beanpole are about to turn fourteen, and they are all too aware that after capping, their peers are never the same.

So book one is the journey. Book two, The City Of Gold and Lead, pits the boys, along with a stoic German, Fritz, against the creatures that operate the tripods, the Masters. Will and Fritz pose as slaves and infiltrate one of the three cities inhabited by the Masters. 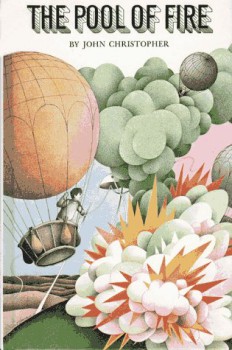 In the third book, The Pool Of Fire, those few free souls remaining must destroy the Masters, and quickly: the Masters are planning to alter Earth’s atmosphere to make the planet livable for themselves, but at the expense of all forms of native life. Two of the three cities fall according to plan, but the third defeats the would-be saboteurs. Time is running out…

Having just re-read the entire sequence (aloud, to my youngest boy, age ten), I am pleased to report that they hold up very well. The first book sets the world effectively, and the perils on the journey are well-paced. Much of the action takes place in France, and Christopher uses the shift from British culture to French as a wedge to keep both his characters and his readers off balance.

The best in the series is the middle book, The City Of Gold and Lead. The cities of the Masters are fascinating, and the Masters’ themselves gain our empathy, while remaining inscrutable and hateful. On the way to the city, Will, Beanpole, and Fritz must make wrenching ethical choices, one of which (a significant theft) made my ten-year-old listener wince. “Should they have done that?” he asked.

The Pool Of Fire suffers from a great deal of explanation. In the annals of “show, don’t tell” (often lousy advice, given by those who can’t see the value of both), large swaths of this book become the poster child for show, show, show. On the plus side, Christopher reserves two aces for the end, one of which I will not divulge, but the other comes as a de facto coda, during which the victorious humans assemble for what will become, in effect, a new global government, a United Nations of the future. 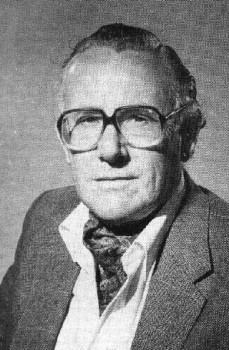 Within minutes, the conference collapses. Both the U.S. and Chinese delegations walk out, citing sovereign interests and fears of a rise in European power. The Germans blame the French. Our heroes, grown now and battle-hardened, make a pact: that having fought the tripods, they will now dedicate their lives to keeping humanity from destroying itself all over again.

Given the headlines of the past week in France, this sounds all too prescient.

The series is notable for its near-total lack of female characters. Will does befriend Eloise, a French noble of his own age, but she appears (alive) only in the first book, and she meets a fate that, while not precisely gory, is offered as the final nail in the coffin of condemnation regarding the Masters. Intelligent and fascinating though they are, the Masters are evil, and what they do to Eloise is the last proof required.

Christopher’s decision to rely on Will Parker as the series’s sole narrator pays solid dividends. Will is not the smartest (that’s Beanpole), and he doesn’t change much (that’s Henry), and he’s far too impulsive to be a good leader (that’s Fritz).

What Will brings to any given situation is the literal punch of his own (in diminutive) name: willpower. He’s a fighter, stubborn, indomitable. Through his eyes, we see and feel humanity’s struggle, and when humanity, freed at last, finds that the struggle is only just beginning, we sense, even with the book’s back cover staring us in the face, that so long as Will is in the fight, there is hope that at the last, fight will not be needed. 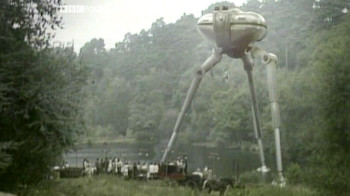 For years, The Tripods could be found in every bookstore across North America (and probably Britain, though I can’t say for sure) as a shrink-wrapped box set. To the best of my knowledge, it has never once gone out of print since its release. The series’s success eventually spawned a prequel (When the Tripods Came), a cartoon strip, and an incomplete TV miniseries, aired in Britain and Australia; the third book, though scripted, was never filmed.

(Without having seen the TV adaptation, I can say this much based on the stills available on the ‘net: those Tripods are much too short.)

The Tripods books don’t trade in the sass and ultra-violence of The Hunger Games (and let’s not even mention the maudlin, self-obsessed, hand-wringing, navel-gazing angst of the Twilight books), but that’s a plus. John Christopher’s saga is smart, considered tale-telling for young adults facing a disunited world – the exact same world (Happy New Year!) that we inhabit today.

With all due deference to sci-fi and FS&S, may the pen always be mightier than the sword.

I read these to my sons when they were in elementary/middle school – they were enthralled by them, as was I. They’re very worthwhile books for readers of any age.

Glad to hear you seconding my opinion, Thomas! Thanks for checking in.

Never read the prequel. The only other Christopher book I really remember reading was a standalone — The Lotus Caves.

Christopher wrote one of the best post-apocalypse books I’ve ever read, The Death of Grass (also published as No Blade of Grass – neither of them very catchy titles). No nuclear exchange here – just a virus that kills all grains and quickly leads to catastrophic, world-wide famine and the collapse of civilization. It’s a goodie (if you like “rotting dead in the streets” stories, and I do!)

I also remember these books. It was one of those situations where everything came together at the same time. I found the 1st book in my local elementary school library at the same time “Boys Life” the Boy Scout magazine began running a serialized version in comic form.

I had forgotten about Eloise.

So funny how those long forgotten names leapt up in my mind as you said them, like old friends you’ve not seen in forever, esp. the Jean Paul = beanpole bit.

Great books, we used to ‘fight’ over them via the reservation list.

Great to hear such love for this series.

Gruud: I, too, have memorized the Masters’ weak spot.

timsbrannan: I never saw the comic. Any good?

Joe H.: Yes, those paper pocket cards were wonderful! I miss them.