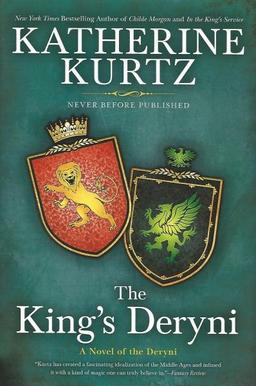 The very first Deryni novel — and Katherine Kurtz’s first published novel — was Deryni Rising, which appeared as part of Lin Carter’s prestigious Ballantine Adult Fantasy line in 1970. Keith West has been gradually working his way through the entire BAF line, and I found what he said about Deryni Rising very compelling.

Katherine Kurtz’s Deryni novels were some of the most popular fantasy novels of the 20th Century. Deryni Rising has been reprinted over 10 times, and more recent volumes in the series have hit the New York Times bestseller list. The series is still being published and now consists of five trilogies, a stand-alone novel, two collections of short stories, and a pair of reference books.

Alaric Morgan always knew his purpose in life — to stand alongside the king of Gwynedd. The old king knew that whichever of his sons succeeded to the throne would benefit from having a Deryni at his side. Alaric and the young Prince Brion Haldane were bound together by magic — a magic to be called upon when Brion was most in need.

Now eighteen, Brion has ascended to the throne and seven-year-old Alaric has come to court. Through the coming years, both will grow to manhood and come to realize their destinies. Brion will strive to solidify his power and position, seek out a bride to secure his legacy, and ultimately, when faced with an unbeatable foe, call upon Alaric to fulfill his oath.

Meanwhile, Alaric slowly learns the extent of his powers and how to use them, and will face the prejudice that many have against Deryni in its ugliest form. He will experience bittersweet first love, great personal loss, and the hard lessons one gains from both. And he will be there to unleash the full power of his Deryni magic at Brion’s command.

For Alaric is -— and always will be —- the King’s Deryni.

Sadly, time has erased much of the story from my memory. I may have to go back and revisit them.

I hadn’t realized there were so many of them, to be honest, until I did my fact-checking for this article. I had forgotten the first one was a Ballantine Adult Fantasy book too, until Keith highlighted it in his article.

Derek Kunsken’s article (linked above) is a nice look back at the early volumes.