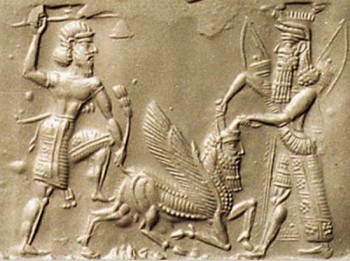 Gilgamesh was not the first man to lose a friend. But he was the first epic hero to lose one.

Enkidu and Gilgamesh had been inseparable in their short friendship. They fought the monster Humbaba and the Bull of Heaven together. But the consequence of their actions was Enkidu’s death. And with that loss, Gilgamesh discovers his own fear of death.

The issue of Enkidu, my friend, oppresses me,
so I have been roaming long roads through the wilderness.
How can I stay silent, how can I be still!
My friend whom I love has turned to clay.
Am I not like him? Will I lie down, never to get up again?

Gilgamesh mourns long and hard, and refuses to even bury Enkidu until decay sets in and a maggot falls out of his nose. After he gives in to the need to let go of even his friend’s body, he leaves behind his kingdom and wanders, obsessed with the question of his mortality.

It is a very blunt grappling. All fiction, as I’ve said before, deals with the questions of human existence. But usually it is in symbolic terms. Gilgamesh isn’t going on a symbolic journey or facing a witch that is an analog of his mother. He is straight up terrified of death and dying, of having his body eaten by worms, of Not Being. So he sets off to find the one man who never died: Utnapishtim.

Utnapishtim was the survivor of a flood that wiped out the rest of the population of the world. The inclusion of his story at the end of the Epic of Gilgamesh is probably why the tablets rose to prominence and stayed there when other works of Mesopotamian literature have been less popular: when nineteenth century scholars found it, they immediately associated Utnapishtim with Noah and the account of the flood in the book of Genesis. (Scholars today associate the two as well, but for very different reasons.)

If you’re familiar with the story of Noah, Utnapishtim’s account will give you deja vu. Humans have gotten to be too many and too numerous, so Enlil decides to wipe them out with a flood. The god Ea warns Utnapishtim, and he builds a boat, loads it with his family, animals, and possessions, and rides out the flood. When the rains subside, he sends out a series of birds: a dove, who returns when she finds no resting place, a swallow who also returns, and a raven who stays on land when he finds it. Utnapishtim lands his boat, makes sacrifices, and is in turn granted immortality by the gods.

Ultimately, he is unable to help Gilgamesh become immortal, but he does tell him of a magic herb that will make the king of Uruk immortal. Gilgamesh finds the herb at the bottom of the ocean and is about to take it back to Uruk when a snake makes off with it. (And that is why a snake is able to shed his skin and live forever. Stupid snake.) And with that, Gilgamesh realizes immortality is unattainable and returns home. 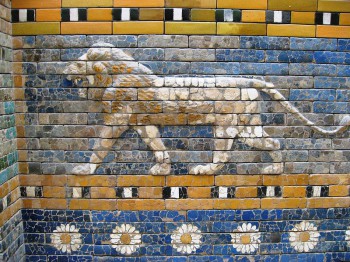 It’s anti-climactic. This may be because we are missing text. It may also be because… well, that’s the end of the story. Gilgamesh cannot live forever. But he can return home and rule his city, and take whatever he can of immortality from what he leaves behind him.

The fact that I’m writing this several millennia later is compelling testimony. As is the lasting impact of the Epic of Gilgamesh. Several authors have noted the parallels between Gilgamesh and Achilles in the Illiad: both are driven to a crisis by the death of their closest friend, both include a focus on the immortality of deeds as opposed to the brevity of human life. Whether the two works have any direct relationship we don’t know, but it’s likely they grow out of very similar narrative traditions.

Whatever you think of it, ultimately, this is the first thing we have. This is the oldest single long piece of literature that has survived. That alone makes it worth the read. The fact that it is also the first account of heroes, monsters, and gods? That’s icing on the cake.

Next week: SOMETHING COMPLETELY DIFFERENT: The Larch. No, wait. Comic books! And a whole new take on Odysseus.

“Gilgamesh sat by Enkidu until a maggot fell from his nose.”

I don’t even remember where I came across it, but that line has always stuck with me.

Any recommendations as to a good eBook version?

Sorry for the slow reply!

Yes, it’s a vivid image, isn’t it.
I don’t know this version personally, but the new translation is available for less than a dollar right now:

It looks like there are a couple good options. Sorry I can’t be more useful!