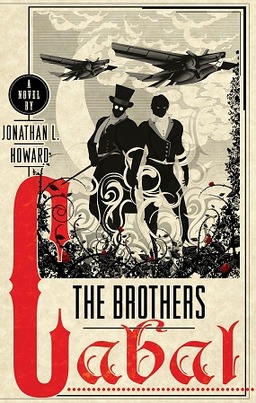 I’ve been following Jonathan L. Howard’s career since we published his light-hearted sword & sorcery tale “The Beautiful Corridor,” about a young thief named Kyth hired to penetrate a deadly tomb, in Black Gate 13 — and its sequel, “The Shuttered Temple,” in BG 15.

His first novel was the highly regarded Johannes Cabal the Necromancer (2009), followed by Johannes Cabal the Detective (2010) and last year’s Johannes Cabal: The Fear Institute. In the latest installment, he teams up with his brother, an affable vampire, to take on an occult conspiracy with a monstrous army.

Horst Cabal has risen from the dead. Again. Horst, the most affable vampire one is ever likely to meet, is resurrected by an occult conspiracy that wants him as a general in a monstrous army. Their plan: to create a country of horrors, a supernatural homeland. As Horst sees the lengths to which they are prepared to go and the evil they cultivate, he realizes that he cannot fight them alone. What he really needs on his side is a sarcastic, amoral, heavily armed necromancer.

As luck would have it, this exactly describes his brother.

Join the brothers Cabal as they fearlessly lie quietly in bed, fight dreadful monsters from beyond reality, make soup, feel slightly sorry for zombies, banter lightly with secret societies that wish to destroy them, and — in passing — set out to save the world.*

*The author wishes to point out that there are no zebras this time, so don’t get your hopes up on that count. There is, however, a werebadger, if that’s something that’s been missing from your life.

Jonathan’s most recent novels are Katya’s World, and Katya’s War, the first books of The Russalka Chronicles. Read Jonathan’s article on writing the Johannes Cabel series and his interview with John Joseph Adams. Johannes Cabal: The Fear Institute was published by Thomas Dunne Books on September 30. It is 338 pages, priced at $25.99 in hardcover and $11.99 in digital format.