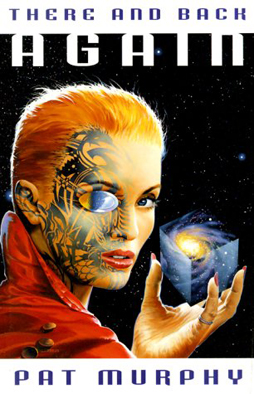 There was an extended period of time in the 1990s and the first decade of this century when I didn’t read much science fiction or genre fantasy. I started reacquainting myself with these fields a few years ago and I’m still in the process of learning what I missed. It’s not uncommon for me to only now find out about an author who established themselves during those years. Which brings me around to Pat Murphy.

A little while ago, I stumbled on three books by her that make up a highly distinctive sort of trilogy: There And Back Again, Wild Angel, and Adventures in Time and Space With Max Merriwell. They were published one a year from 1999 to 2001. They don’t really share a plot or setting, though some characters cross over from one to another. They’re linked by concepts both metafictional and science-fictional, which is a surprisingly unusual pairing, and while each can easily be read alone, the third book ties them all together with surprising effectiveness. ‘Surprising’ because at first the links between the books aren’t obvious. But by the end of book three, you realise what Murphy was driving at, and why these things had to be done in this particular way.

So what are these books? There And Back Again is a futuristic sf story about Bailey Beldon, a simple ‘norbit,’ a human inhabitant of an asteroid, who gets tied up with an oddball wanderer named Gitana and a family of thirteen clones. The clones have a map that’ll lead to a treasure with a fearsome guardian — and Gitana has decided that Bailey will accompany them on their quest. It is, in fact, a science-fictional and somewhat gender-flipped version of The Hobbit, and extremely effective. Similarly, Wild Angel is a story set in nineteenth-century California of a girl whose parents were killed when they came west to look for gold; the girl’s raised by wolves in exactly the same way Tarzan was raised by apes. But it’s the third book where things get really strange. 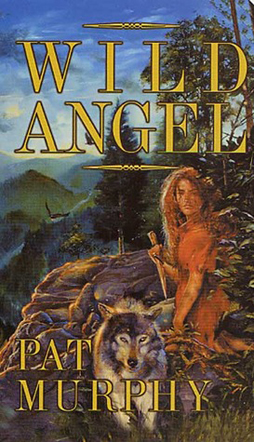 Autobiographical afterwords in both books explain how the original texts underlying the first two novels affected Murphy when she was young. They also explain who ‘really’ wrote the novels. Murphy’s very clear that she’s writing in character. She’s imagined a novelist named Max Merriwell, who writes science fiction. He also writes fantasy under the name Mary Maxwell — not just under that name, but in that persona. And he similarly writes crime novels as one Weldon Merrimax. So There And Back Again was written by Max, Wild Angel was written by Mary (or, Murphy writing as Max writing as Mary), and Adventures in Time and Space introduces us to the writer himself, as strange things begin happening on a cruise ship bound for the Bermuda Triangle. Max is a character in the book; other characters aboard ship are fans and read his books, which affect the ongoing story in surprising ways. And then his fictional pseudonyms turn up as well. And also present on the cruise ship is one Pat Murphy; the third different Pat Murphy to appear in the three books.

So the whole thing is a clever playing-about with levels of reality. Murphy brings in the semi-serious philosophical notion of ‘pataphysics, or physics beyond metaphysics, to help tie things together; and there is much discussion of the nature of quantum physics in the third book, as characters begin crossing over from reality to reality. But more than simply being clever, there’s a point to all this. These books are about possibilities, and the possible ways lives can unfold; the way we can choose what possibilities we wish to make real. The way we can choose who we want to be. The alter-egos and quantum counterparts of all the different characters emphasise the many different identities they both can be, and yet also actually are.

This comes out through a deft play with the idea of travel. The cruise ship of the third book is the way by which the book’s protagonist changes, just as Bailey Beldon’s journey across the galaxy in the first book is the way by which he changes. Wild Angel seems to do something different; there we see voyagers arrive, see who they’ve become and who they choose to be. (It’s interesting, too, that the heroine’s raised by wolves. The ship of Adventures in Time and Space is named the Odyssey, as is the clones’ ship in There and Back Again, but in Adventures it becomes the key to a range of Classical allusions in the layout of the ship — the restaurant is Circe’s Kitchen, Aphrodite’s Alehouse is one of the bars, and so on. So in reading about the woman raised by wolves, you can’t help but think about Romulus and Remus.) 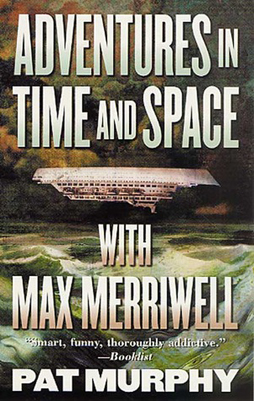 The books are quite clever, though there’s a clarity to the prose that’s at times counterproductive. It’s not quite YA writing, but there’s a simplicity to the rhythms and dialogue that seem oddly light. This actually helps set the tone of the first book quite well, echoing the juvenile feel of The Hobbit. But it doesn’t really catch the slightly fevered tone of Tarzan in the second book, and there’s a directness of description that tends to undercut any atmosphere of tension the third book might have built up.

In some ways, though, that again might be a good thing. Adventures is the slipperiest of the books, the least predictable. Unlike the other two, it doesn’t follow a predecessor’s shape. You’re not quite sure for a while what sort of book it is you’re reading, and then when mysteries deepen you think you see where it’s going — until science-fictional ideas start getting thrown around. It may be on the whole the most successful of the novels.

And what may be best about it is the way in which it brings all three books into focus. I had the experience while reading it of having everything click into place: the structure and themes of the whole series became clear in a moment. I suspect that’s deliberate; anyway, it’s a nice trick. The variety of the books is revealed as a daring architectural idea, throwing out ideas in the first that seem not to connect with the second until the third ties them all together. It would have been easy to get tripped up, but there’s not a foot wrong here. I was impressed; and now I know to keep an eye out for a writer I missed the first time around.