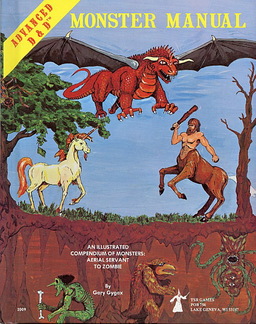 For certain writers, especially those raised in the 1970s and ’80s, all that time spent in basements has paid off. D&D helped jump-start their creative lives. As [Junot] Díaz said, “It’s been a formative narrative media for all sorts of writers.”

Mr. Díaz, who teaches writing at the Massachusetts Institute of Technology, said his first novel, the Pulitzer Prize-winning The Brief Wondrous Life of Oscar Wao, was written “in honor of my gaming years.” Oscar, its protagonist, is “a role-playing-game fanatic…” Though Mr. Díaz never became a fantasy writer, he attributes his literary success, in part, to his “early years profoundly embedded and invested in fantastic narratives.” From D&D, he said, he “learned a lot of important essentials about storytelling, about giving the reader enough room to play.”

I read that article last weekend, and it made me wonder at the number of artists in general who must have been influenced by D&D. Writers is kind of obvious, or at least I’d think so, but what about painters and movie makers? What about musicians?

And what of crafts and other hobbies and professionals within those hobbies’ industries? I believe the whole Rennaisance fairs scene got its start back in Berkely in the ’60s, if my memory serves, but I can’t imagine D&D didn’t have an influence in the popularity of such festivals over the last couple of decades.

You’re absolutely right. Video games is the other obvious category… I cannot count how many hundreds of digital role playing games have been published since the 1980s, obviously tracing their lineage back to D&D.

But I’m more intrigued by your question about music. I’m no expert, and the influence here might be more subtle, but I’m certain it’s real. I’d love to see someone trace the influence of D&D in Western music over the last four decades.

Yep, research on D&D’s influence on music would definitely be interesting. The only obvious influences I can think of at the moment are the Weezer song “In the Garage” from back in the early ’90s, and the Marcy’s Playrground song, “Cloak of Elvenkind.” But I’d be surprised if D&D or RPGs in general didn’t influence at least a number of metal bands, as Sword and Sorcery in general seems to have done since the inception of harder rock music.

Basically everything I do at Art of the Genre, including all novels, are loosely based on D&D or other RPGs.