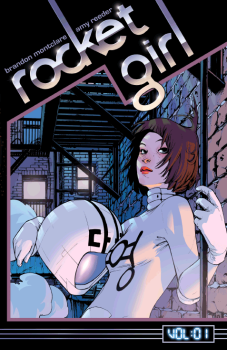 One of the chief appeals of this comic, for me at least, is nostalgia. The story moves between two bygone eras: the 1980s and the future. I grew up in the 1980s and, like a lot of people my age, had almost as solid of an idea of what the future looked like as the present. In 1986, we all knew about the future. We’d been seeing it for decades on television and in the movies, after all. The future was filled with steel and plastic, robots and flying cars, bright colors and hope. Sure, there were some stories out there where the future turned out horrible, but we understood these as cautionary tales, warnings about the problems we’d avoid to guarantee that amazing era of endless innovation. We knew that 2013 would be so different from 1986 that anyone stepping through a time machine would think he’d set foot on an alien world. Even the slang would be different. But, for better or worse, that future is now past.

So, Rocket Girl starts in 1986, where a team of young quantum engineers (just run with it) are testing their Q-engine (which, for the story, is essentially a McGuffin device), when Dayoung Johansson, teen police officer from the year 2013, appears and places them all under arrest for crimes against time. Then she passes out.

As the story progresses, we get further clues to the exact nature of the “crimes” that have been perpetrated (or which will be perpetrated, given your point of view), with the implication that Dayoung’s actions in 1986 will either completely erase the 2013 she knew or unintentionally ensure that it happens. Meanwhile, as long as she’s in 1986 New York, she decides to use her futuristic technology (including her standard-issue rocketpack) to fight the crime and corruption that infests the city. Curiously, helping innocent people is not misinterpreted, she is not labeled a freak, and people treat her like a hero. It’s been a while since we’ve seen something that upbeat in a comic book.

The time-travel plotline, though complicated, is always presented in small pieces (no info-dumps), so it never bores. One clever touch is that, since the future is shown primarily as Dayoung’s flashbacks, 2013 is referred to as being “The Past”, while 1986 (where the bulk of the story takes place) is the “The Present.” The characters begin as broadform stereotypes, but soon become fairly distinct and generally likeable (except for Professor Sharma, who starts as a jerk on page one and stays that way). Each issue has at least one outrageous action scene and, in the end, it’s not Dayoung, but someone inspired by her heroism, that saves the day. Of course, we don’t know how the finale will actually affect the future, so there’s incentive to come back for volume 2 (which starts getting published as separate issues this fall).

Brandon Montclare’s scripts manage to give out lots of “character moments” between action scenes, so that we stay interested in these characters even during the “talky not fighty” scenes. Amy Reeder’s artwork shines on every page. She gives both 1986 and 2013 a beautiful “lived in” look, filled with details that had me going back to look for all of her little touches. Things to look for in the 1986 segments: an issue of Mage 13, a Whatchamacallit bar, a theater showing The Rocky Horror Picture Show, a d20, and just lots of odds and ends. Most of all, Rocket Girl actually is a girl, 15 years old, and drawn as such (unlike Supergirl, Batgirl, and every other “Girl” in comics being drawn like a 23-year-old swimsuit model with back problems). The only complaint is that her amazing two-page action spreads lose something in a perfect-bound collection (as opposed to the individual comic book issues where they originally appeared), where you can’t lay the pages flat without destroying the spine.

The early issues of this series are already going up in price and this is a great way to catch up on the whole storyline before “season two” of the comic kicks off with issue 6. It’s available for $9.99 in print and digital format. You can learn more about the series at Image Comics and the Podcorn podcast (where both Amy Reeder and Brandon Montclare offer their insights on this series).

Michael Penkas has had over a dozen stories published. His most recent published work, “Sticky Fingers,” is part of the HWA Poetry Showcase Volume I. You can learn more about his work at michaelpenkas.com.