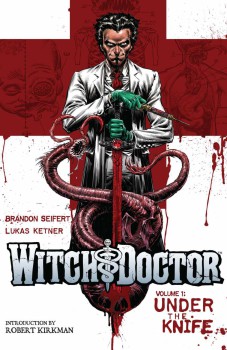 What if Dr. Gregory House had become Sorceror Supreme instead of Dr. Stephen Strange? If you’re familiar with both those names, chances are you’ve just clicked off this page to order your own copy of Witch Doctor: Under the Knife. If you never watched House and never read Doctor Strange, don’t worry … this isn’t one of those parody books that requires preliminary reading.

Dr. Vincent Morrow is a practicing physician whose specialty is supernatural medicine. Demonic possession, vampiric infection, pregnant faerie folk … Vincent Morrow’s the guy you call. What the doctor lacks in bedside manner, he makes up with a knowledge of the occult so vast that it sounds like he’s making it up as he goes along (which hardly ever turns out to be the case). How exactly is interspecies breeding possible with the Deep Ones? What is the medical definition of a soul and how do you treat someone who’s born without one? What kind of scalpel does one use to remove a demonic parasite? (Hint: It’s the kind you have to pull out of a stone.) The answers combine traditional folklore with modern medical terminology.

The strength of this series is in the sheer overload of fresh ideas and new perspectives on old storylines. Of course, we all know the key features of a vampire (big teeth, aversion to holy symbols, allergy to sunlight), but there’s just something fascinating about watching a doctor run through each characteristic and reason out how it evolved in what is essentially a supernatural parasite. An old-school paranormal investigator would use some sort magic sphere to track down a faerie trading changelings for human babies, but Dr. Morrow opts instead for a CDC-style database that pinpoints each incident, then traces it back to an origin point as if it were an influenza outbreak rather than a supernatural phenomenon. And it’s fun, after all the other crazy stuff that happens in chapters one and two, to see him get genuinely bothered by the interordinal hybridization of Deep Ones mating with humans, not because it’s disgusting, but because it’s medically impossible.

Unfortunately, if there’s a downside to the series (and this is just a minor complaint of mine), it’s the supporting cast. Dr. Morrow is a great protagonist, short-tempered and sarcastic, but clearly motivated by a noble desire to save as many lives as possible. His ability to see the world of the supernatural without the usual assumptions, to break down divine relics into simple tools with clearly-defined applications, makes him into the sort of character that we don’t see often enough in fantasy fiction: the pragmatic mystic. His assistants, on the other hand, are far less inspired. Eric Gast is Morrow’s paramedic and fills the role of reader-identification character. He’s asking all the questions that you or I would ask, but every time he does, I’m left wondering why Earth’s Sorceror General would partner with someone who knows absolutely nothing about the supernatural. Morrow’s other assistant is code-named Penny Dreadful, an art school student possessed by some demon-ish thing that occasionally erupts from her stereotypical stoner-goth body. If you imagine that girl from The Ring being put into a hoodie … then you know exactly what Penny Dreadful is. This series starts in the middle of things, with Morrow, Gast, and Dreadful already working together, so we haven’t yet seen an origin story that explains how the three of them met. In future stories, these two assistants may develop into more interesting characters, but for now they are the bumbling Watson and generic spooky girl.

There’s an interesting afterword that posits the nature of monsters and how all of the big supernatural baddies of today (zombies, vampires, and werewolves) have been retro-fitted into diseases (none of them were self-perpetuating in the old stories), marking our cultural pre-occupation with disease.

The series is written by Brandon Seifert (Disney Kingdoms: Seekers of the Weird, Clive Barker’s Hellraiser: The Dark Watch) and illustrated by Lukas Ketner. It’s available in paperback through Amazon for $10.47 or in digital format through Comixology for $5.99. And if you like it, there’s also a volume two (Mal Practice) available.

Michael Penkas has had over a dozen stories published. His most recent published work, “Sticky Fingers,” is part of the HWA Poetry Showcase Volume I. You can learn more about his work at michaelpenkas.com.